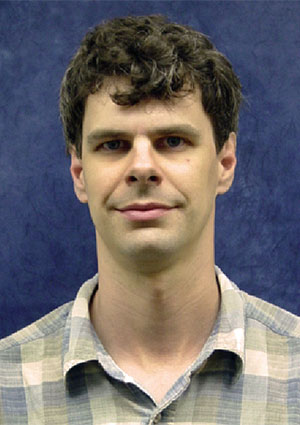 In Einstein’s theory of General Relativity, gravity is described in terms of geometry: the distances between points in space and time. Gravitational waves—oscillating gravitational fields that affect the distances between nearby points—are produced by the most violent events in our universe including supernovae, collisions of black holes, and the big bang. Yet, these waves are barely noticeable and have yet to be detected.

The Laser Interferometric Gravitational-Wave Observatory, LIGO, is a national facility to detect gravitational waves. Creighton participates in the LIGO Scientific Collaboration in an international effort that will search for gravitational waves from the distant universe.

Jolien Creighton obtained a BSc in Physics at the University of Calgary in 1992. He did his graduate work at the University of Waterloo, where he received his PhD in 1996. After earning his PhD, Creighton spent three years at the California Institute of Technology as a postdoctoral scholar. In 1999, he came to the University of Wisconsin-Milwaukee to work as a research associate. In 2002 Professor Creighton joined the faculty, in 2007 he became an Associate Professor, and as of 2013 holds the rank of Professor.

Creighton has been chair of the Ligo Scientific Collaboration (LSC) internal review committee for the burst group during 5 years (2005–2009) and the LIGO/LSC Algorithm Library librarian since 2000. He has received six awards from the National Science Foundation (NSF) and his research is currently supported by two of them, PHY-0701817 and PHY-0600953.