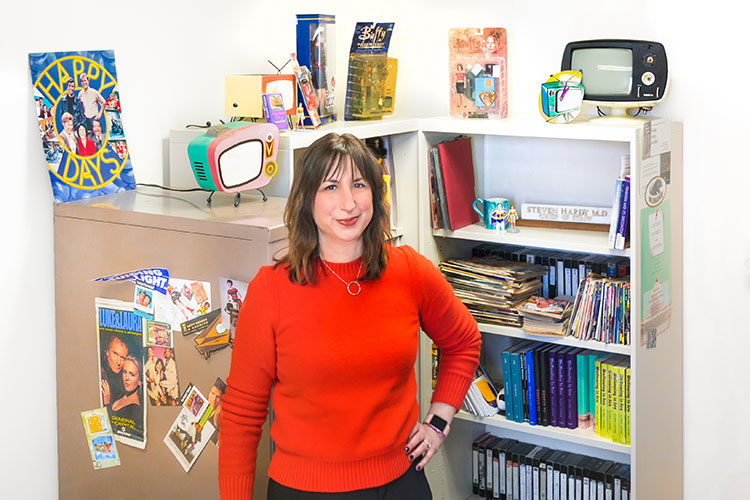 The study of soap operas is a labor of love for UWM English professor Elana Levine. (UWM Photo/Elora Hennessey)

The history of the daytime soap opera sometimes reads like a story arc from a program in one of television’s oldest and most influential genres.

Starting from humble beginnings on radio, soaps transitioned to daytime TV in the late 1940s and rose to become immensely popular especially in the 1970s and 80s. Since then, soaps have declined in number and popularity as TV viewing options have multiplied, though the sudsy dramas still draw loyal followings.

Elana Levine, a professor of English and expert on American television and media, traces the genre’s past and present in a new book, “Her Stories: Daytime Soap Opera and US Television History.”

A lifelong fan of daytime soaps, Levine looks at how they have influenced broadcast television overall, as well as how the genre has portrayed ideas about American women and social identities.

“It’s tracing these two histories, looking at the history of ideas about femininity and women’s identity over a 70-year period,” Levine said, “and also thinking about how this particular form of television really shapes and helps us understand a lot of things about television as a business and as a storytelling medium.”

This is a labor of love for Levine. Her office is filled with TV and pop culture paraphernalia, including a photo cutout from a magazine spread of the “General Hospital” supercouple characters Luke and Laura. 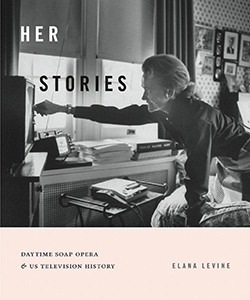 “I’ve spent decades watching mainly one soap since I was a teenager,” said Levine, a “General Hospital” fan. “I was kind of obsessed and knew all about them.”

The book is rooted heavily in Levine’s study of thousands of pages of memos, correspondence and scripts during visits to archives around the country including the Paley Center for Media in New York, UCLA and the Wisconsin Historical Society.

The research also involved watching hours and hours of soaps. Some of the older material came from her own collection. Other times, she found recordings on YouTube or received copies of old shows recorded on VHS tapes and DVDs by fans.

Soaps hold sway over some of primetime’s most popular programs. Daytime dramas adapted their serialized radio formats to the small screen from the earliest days of television, meaning that storylines could linger over weeks, months or even years.

The influence on nighttime dramas stretches beyond classic soaps like “Dallas” or “Dynasty.” Shows like the “The Sopranos,” “Big Little Lies” and even the fantasy epic “Game of Thrones” all draw in part on the serialized format.

Serialized storytelling also existed in other forms, such as in novels or comic books. “But in terms of TV, the daytime soap opera was really the place where this kind of storytelling evolved,” Levine said.

Historically, women have played key roles on soaps both behind and in front of the camera. Daytime television also tends to adapt storylines to shifting societal norms.

For instance, Levine notes that in the 1960s, with more women working outside the home, soap operas began depicting more female characters working. With most programs set around hospitals, more female nurses, and the occasional doctor, were introduced to fans. Soaps also were among the first shows to tackle once taboo topics like breast cancer, sexual assault and same-sex relationships.

“In the world of daytime soap operas, there have been many women in pretty powerful roles as creators of their own program, writers and producers,” Levine said.

“They’ve had this kind of this voluminous body of work that has been creative and influential in lots of ways,” she added. “They are telling their stories … We can learn from their experiences and understand how this might impact the present.”

In researching the book, Levine found some soap opera ties to Wisconsin:

Doris Hursley, who created “General Hospital” with her husband, Frank Hursley, was born in Milwaukee. Her mother, Meta Schlichting Berger, graduated with a degree in education from the State Normal School in Milwaukee, a predecessor to UWM. In 1897, she married Victor Berger, the co-founder of the Socialist Party and the first Socialist elected to the U.S. House of Representatives. Meta Berger later served a six-year term on the UW Board of Regents.

In the 1930s, Frank Hursley taught English at the school that what would become UWM. Doris Hursley earned degrees from UW-Madison and Marquette.

Irna Phillips, who is considered the matriarch of the soap opera genre, attended UW-Madison and her papers are housed at the Wisconsin Historical Society. In 1930s, Phillips created “Painted Dreams,” one of the earliest radio soap operas. She also created “The Guiding Light” and was its writer for its transition to television.

The Hursleys’ daughter, Bridget Dobson, created the now-defunct soap “Santa Barbara,” with her husband, Jerome. The Dobsons also wrote for other shows. A collection of scripts, correspondence and other documents written by the Hursleys and Dobsons is also at the Wisconsin Historical Society.

The CBS soap “The Young and the Restless” is based in Genoa City, Wisconsin. But the fictional Genoa City, which has an international airport and serves as headquarters for major makeup, fashion and entertainment corporations, bears little resemblance to the real-life Genoa City near the Illinois-Wisconsin state line.

Levine suspects that the fictional Genoa City is based loosely on Lake Geneva, Wisconsin. William J. Bell, who created “The Young and the Restless” with his wife, Lee Phillip Bell, was from Chicago. The late couple’s son, Bradley Bell, who is the executive producer of the CBS soap “The Bold and the Beautiful,” has said that the family spent a lot of time in Lake Geneva when was growing up. Like his father, Bradley Bell returns to Wisconsin every summer to write for his soap.