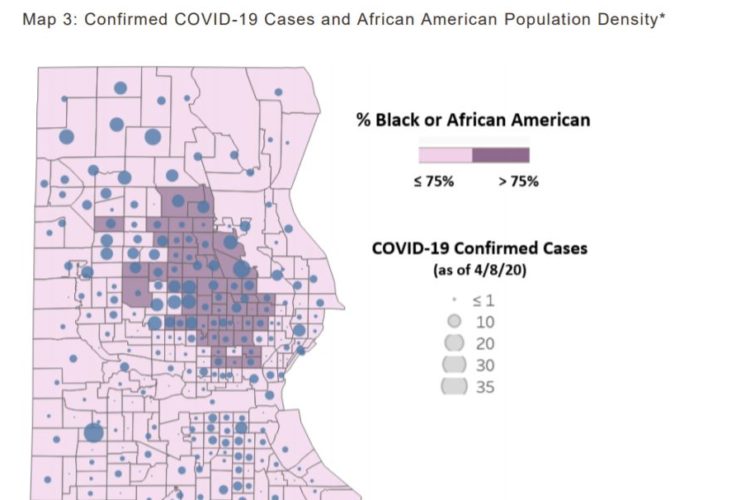 Areas of Milwaukee with higher concentrations of African American residents have disproportionately high numbers of reported cases and COVID-19 clusters, according to a study by the UWM Center for Economic Development.

The spread of confirmed coronavirus cases in Milwaukee is associated closely with race and patterns of segregation in the county, UWM researchers have found.

Areas with higher concentrations of African American residents have disproportionately high numbers of reported cases and COVID-19 clusters, according to the study by the UWM Center for Economic Development. Areas with higher concentrations of white residents and higher income levels have fewer reported cases and very small numbers of virus clusters, the study found.

The report outlined what researchers called “disturbing patterns” of the early stages of coronavirus spread. The findings mirrored trends from other major metropolitan areas with large black populations, including Detroit, New Orleans and New York.

Joel Rast, director of Center for Economic Development, said the UWM report may be one of the first academic studies in the country analyzing racial disparities during the pandemic. Rast and his team analyzed population statistics from the U.S. Census Bureau and data on confirmed cases through April 8 from the Milwaukee County Health Department COVID dashboard.

Rast hopes the report provides important information to the public and policymakers addressing the crisis.

“When you see people dying in the African American community, when you see how this virus is spreading disproportionately in African American neighborhoods, it’s very difficult to ignore,” said Rast, who is also an associate professor of political science.

The study found that while 13% of the county’s population lives in census tracts that are at least 75% African American, those tracts accounted for 26% of confirmed coronavirus cases as of April 8.

By comparison, while 31% of the population lives in census tracts that are at least 75% white, those areas accounted for just 23% of confirmed cases in the county. Even greater disparities were found with concentrations of clusters of 10 or more coronavirus cases.

“Should this pattern continue, simply living in an area that is mostly African American may significantly increase the risk of contracting the virus in comparison to areas of the county that are mostly white,” the authors wrote in the report.

Of the 67 COVID-related deaths reported by the Milwaukee County Medical Examiner between March 19 and April 8, 46 were African American.

“We do not know whether these patterns will continue,” the report said, “but what we have seen so far raises the prospect of a pronounced racial and ethical crisis.”

Among the study’s recommendations: