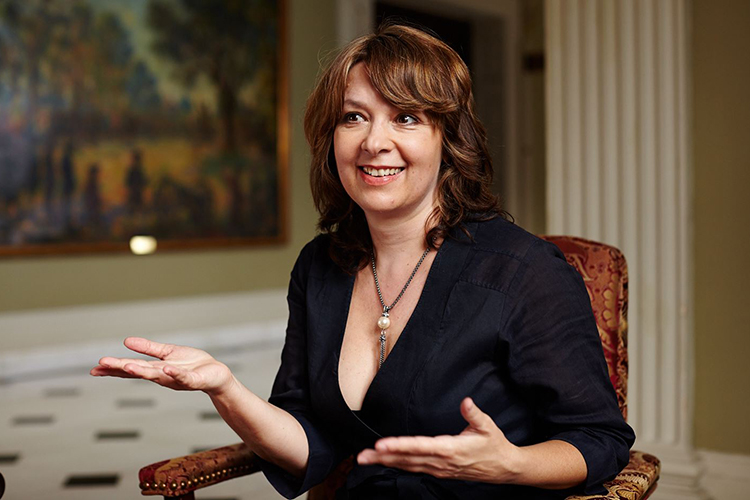 René Steinke, who earned her doctorate in English/creative writing from UWM in 1993, is gaining increasing recognition for her novels. This year, she received a Guggenheim Fellowship in Fiction, and her second novel, “Holy Skirts,” was a finalist for the National Book Award. It was also included among the Best Books of the Year by the Chicago Tribune and the Washington Post. Her most recent novel, “Friendswood,” was named one of National Public Radio’s “Great Reads of 2014.”

Steinke lives in Brooklyn, and she is the director of the MFA Creative Writing Program at Fairleigh Dickinson University in New Jersey.

In researching an essay on the New Jersey doctor/poet William Carlos Williams, I came across this scathing review of one of his works. It was written by the Baroness Elsa von Freytag-Loringhoven, a poet and artist of the early 20th century, who’d had an affair with him. She appeared in a lot of biographies of artists and writers of the 1910s and 1920s. She was completely colorful, but nobody had written her story. I just got fascinated with her and fell in love with her artwork, her poetry, and her autobiography. She was one of the true early feminists.

Your most recent novel, “Friendswood,” is about the aftermath of an environmental disaster and how it affects four families in a small Texas town. Was that based on an actual incident?

The novel is fiction, but Friendswood is a real place, my hometown. The environmental disaster actually happened right outside of town. A subdivision was built near fields where an oil refinery had been dumping chemicals for decades. People began to notice alarming rates of birth defects and cancer. Finally, there were local hearings and protests. Eventually, the houses were bulldozed. It’s not dissimilar to things that are happening today with fracking and other environmental disasters. It’s the story of a particular town, but it’s also an American story.

Your novels seem so different from each other. How do you get your ideas?

Each of the novels comes from some combination of reading and seeing what’s interesting in my day-to-day life. Though they seem on the surface to be radically different, there’s one thing I keep returning to — there’s always the character of a woman who’s somehow on the margins.

I think I first became interested when I was 8 years old. My dad was a Lutheran minister. I saw him writing sermons every Sunday, and he passed down a love of literature to me.

Why did you come to UWM for your doctorate?

I wanted to teach as well as write. At the time, this was one of the few places that offered the doctorate in English with a creative writing concentration. I had some wonderful professors and colleagues. That program allowed me to write the first draft, an early version of my first novel, “The Fires,” as my dissertation. It was a good program, very rigorous.

What are you working on now?

I don’t want to say too much about it yet, but it’s about a woman living in a town near El Paso on the Texas-Mexican border. The title is “The Way Through.”

My MFA is in poetry from the University of Virginia, but while I was interested in metaphor and compression, I started to feel my real gifts were not with the line, but the sentence. Short stories are more about the moment, a single illuminating moment. I think my mind works better with the messiness of the novel – it’s a controlled mess. You’re exploring and trying to form a larger landscape.

I love teaching.  I currently teach graduates and undergraduates, and they’re different but equally rewarding. I feel such gratitude to my professors at Valparaiso University (where she earned her undergraduate degree). They, along with UWM professors, really taught me how to teach.

Do you find some parents may discourage their students from studying creative writing because they don’t think it will lead to a paying job?

I was lucky that my parents always encouraged my writing. They trusted that if we did the thing we loved, we would make it work. (Steinke has three younger siblings in creative fields.)

Creative writing is actually a very popular major here (at Fairleigh Dickinson). There are jobs out there after graduation in advertising, publishing, public relations, finance or teaching. If you’re writing seriously, you have to think creatively and be articulate and find a way to make things interesting for people. All those skills are actually valuable in the workplace.