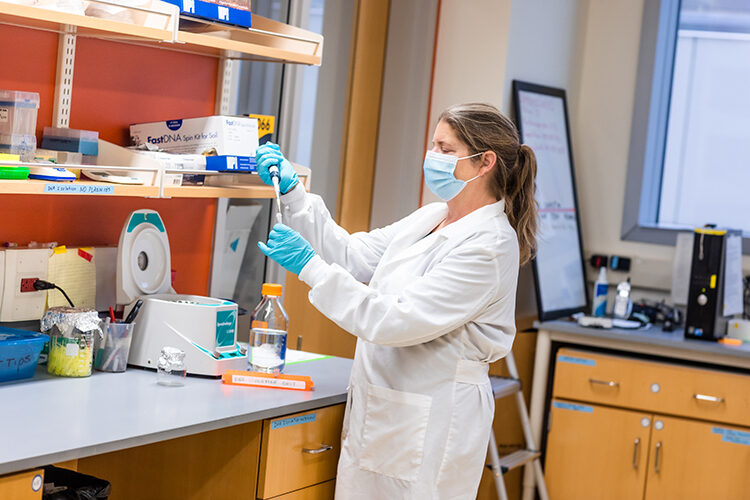 Sandra McLellan, of the School of Freshwater Sciences, is one of the many scientists powering UWM’s research efforts. (UWM Photo/Elora Hennessey)

The University of Wisconsin-Milwaukee has earned the highest rating for research from the Carnegie Classification of Institutions of Higher Education for a third consecutive time.

The classification places UWM among the world’s leading institutions of research. Just 146 of nearly 4,000 institutions considered by Carnegie placed in its “highest research activity” category, often called R1. UWM is one of just two universities in Wisconsin to achieve R1 status, along with UW-Madison.

UWM previously received an R1 listing in 2015 and 2018. Before that, UWM ranked one tier below, as an R2 doctoral university. The list released Thursday is preliminary. A final list will be announced in January. (Note: The initial list of 137 R1 institutions was revised upward to 146 in the final listing.)

“I am elated that UW-Milwaukee has retained its Research 1 status and remains one of the top research universities in the nation,” said UWM Chancellor Mark Mone. “Attaining R1 under any conditions is a monumental feat and is affirmation of the remarkable impact of UWM’s exceptional faculty, staff, doctoral students and researchers who were integral to this ultimate recognition.”

The Carnegie lists, first published in 1973, are issued about every three years.

The Carnegie Classification is the leading evaluation of universities’ research activity. The ranking helps attract and retain top research talent among faculty, researchers and graduate students.

“This reaffirmation of UWM’s R1 status is a tremendous tribute to the outstanding work of particularly our faculty, research staff, and student researchers, particularly at the doctoral level,” said Provost Johannes Britz, the university’s top-ranking academic officer. “UWM’s research and doctoral programs have a profound impact on the region, positioning Milwaukee as an innovation hub.”

Research at UWM permeates all levels of the university and spans dozens of fields, impacting thousands of lives through innovations and discoveries in mental health, sports, the cosmos, science, public health, our environment, advanced manufacturing, the arts and more. Here are just a few examples of the ground-breaking work done at UWM:

Research helps fuel the region’s economy and develop its talent pipeline. Researchers hold more than 100 patents and have dozens of license and option agreements through the UWM Research Foundation. Some 20 startup businesses have grown out of UWM research.

And, UWM has one of the nation’s best undergraduate research programs, as recognized by the Council on Undergraduate Education. The program lets students work side by side with world-class faculty, developing practical skills that position them well to enter the job market.

The Carnegie Classification ranks institutions into three categories based on the number of doctoral degrees awarded and the amount of research expenditures during the previous academic year. In fiscal year 2021, UWM had $44.7 million in research expenditures. More than half of that amount – $26.2 million – came from federal agencies.