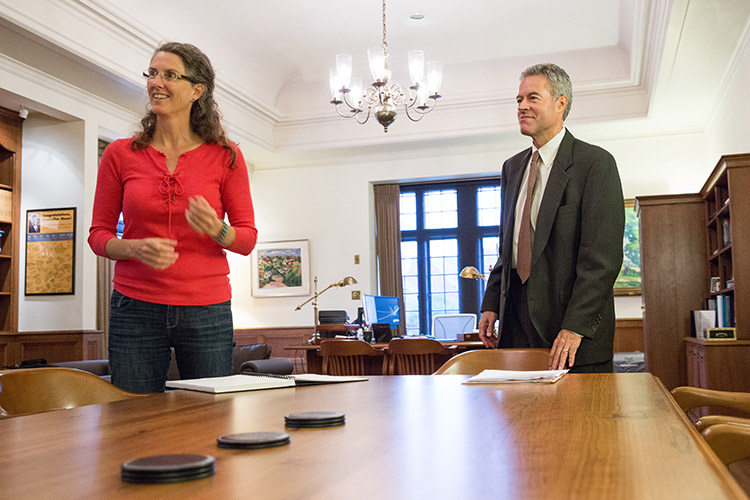 Anne Basting meets with UWM Chancellor Mark Mone after the announcement that she had been named a MacArthur Fellow. (UWM Photo/Troye Fox) 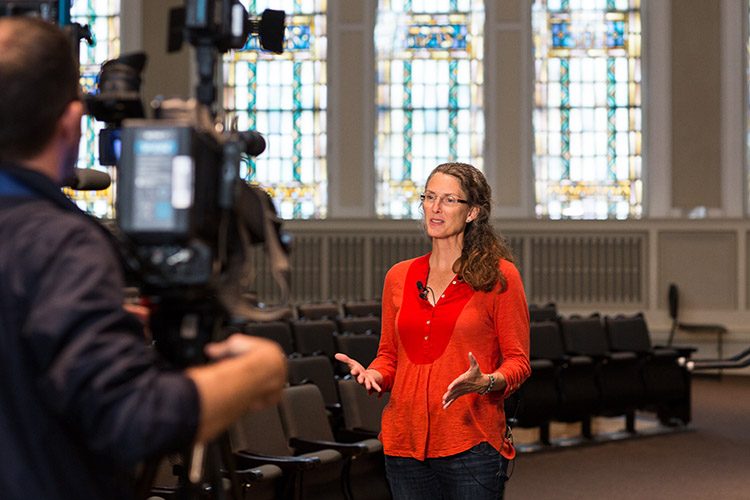 UWM theater professor Anne Basting meets with the media after the announcement of her MacArthur award. (UWM Photo/Elora Hennessey) 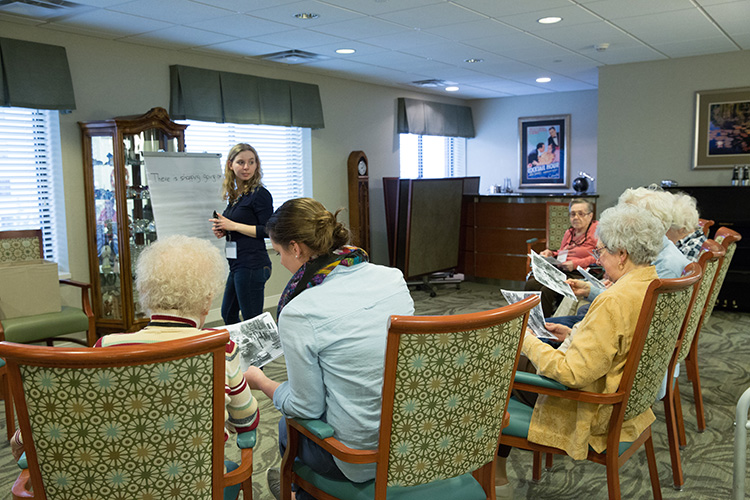 UWM students lead seniors at St. John's on the Lake through a storytelling exercise as part of the TimeSlips program created by UWM theater professor Anne Basting. (UWM Photo/Troye Fox) 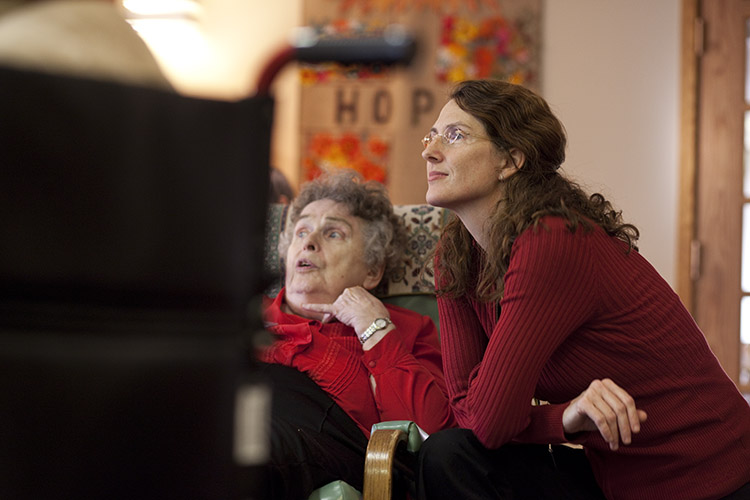 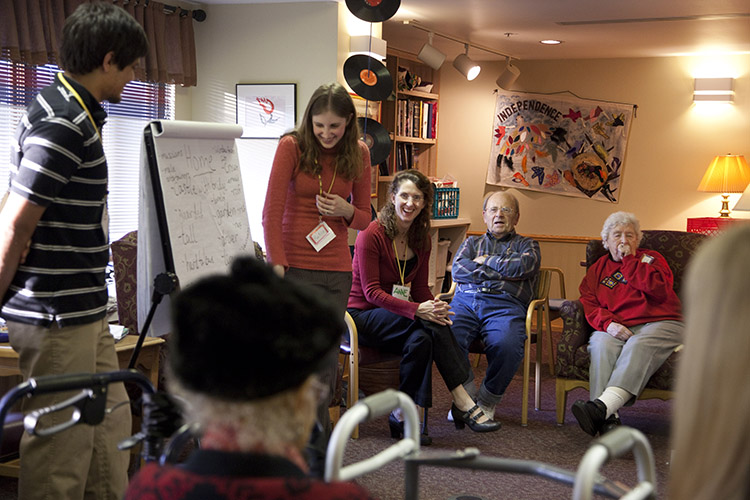 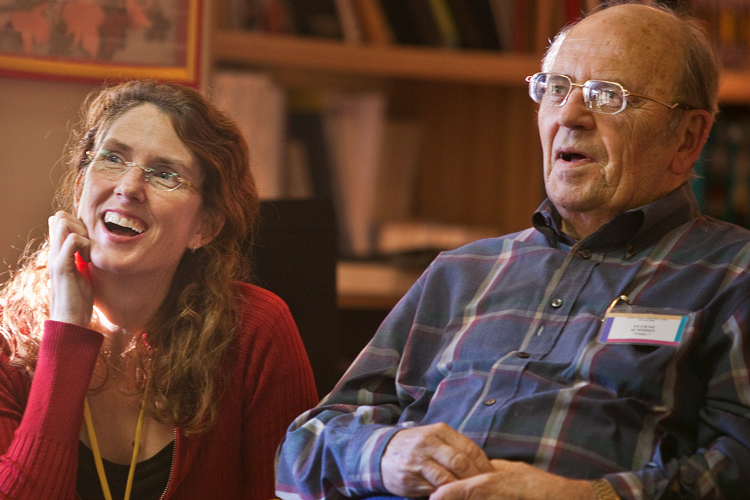 Basting, 51, was one of 23 new fellows announced by the foundation late Wednesday night, and each will receive $625,000 to pursue whatever projects they desire. The unrestricted fellowships, colloquially known as “genius” grants, are awarded to people who have shown “extraordinary originality and dedication in their creative pursuits and a marked capacity for self-direction.”

Basting sees the fellowship as an award shared by the many people she’s worked with through the years. 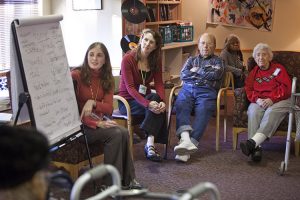 “All of my work is collaborative,” Basting said, “and I feel suddenly like I’m standing by myself, and it’s not where I’m comfortable. So waves of gratitude go to all the people that have ever said yes to agreeing to do a project with me over the years, and in Milwaukee, that’s a huge network now. I’ve done national and international work, too, but the depth of collaboration and support from Milwaukee has been huge.”

Basting learned of the fellowship via phone a few weeks ago while driving in the Holy Hill area on the outskirts of Milwaukee. Although she didn’t recognize the incoming number, she always answers calls, just in case it’s regarding one of her two sons.

But this call was from was Cecilia Conrad, managing director of the MacArthur Foundation, who asked if Basting was in a private place where she could talk. Basting explained she was driving her car.

“She said, ‘I think you need to pull over,’” Basting recalls. “She told me, and I just burst into tears, and said, ‘Thank you for making me pull over.’”

Basting told her husband, filmmaker Brad Lichtenstein, about the honor, but she was sworn to secrecy and couldn’t tell anyone else until Wednesday’s late-night announcement.

“It’s been three excruciating weeks,” Basting said. “I think some of my colleagues thought I was sick.”

Basting’s focus at UWM’s Peck School of the Arts is on community-engaged performance, and she’s an expert on integrating arts into aging services and long-term care. She’s founder of the Creative Trust, an alliance that fosters lifelong learning through the arts, and which supports a Student Artists in Residence program that trains and embeds students with aging services organizations.

Among Basting’s many other projects are TimeSlips Creative Storytelling, The Penelope Project and the Islands of Milwaukee. They all exhibit the kind of creativity and community involvement to which Basting has devoted her professional career, and which ultimately drew the foundation’s attention.

“While our communities, our nation and our world face both historic and emerging challenges, these 23 extraordinary individuals give us ample reason for hope,” MacArthur President Julia Stasch said. “They are breaking new ground in areas of public concern, in the arts, and in the sciences, often in unexpected ways. Their creativity, dedication and impact inspire us all.”

Basting is the sixth person to earn a fellowship while living in Wisconsin, and the first since Milwaukee’s Will Allen, founder of Growing Power, was honored in 2008.

News of Basting’s honor spread quickly, and she’s been prominently featured in the Milwaukee Journal Sentinel, The New York Times and on American Theatre’s website. The MacArthur Foundation also has produced a video and brief history of her work.