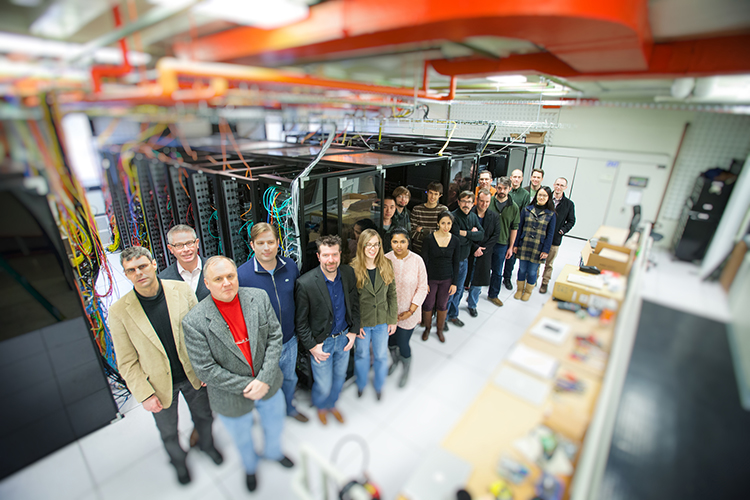 Play Video
The 30 members of UWM's LIGO team are part of the LIGO Scientific Collaboration, an international consortium of 70 institutions and hundreds of researchers. The UWM group contributed computing power to the search for gravitational waves, along with the analytical tools that identified the detected wave as the product of colliding black holes. (UWM Photo/Pete Amland)

A billion years ago, before the continents even formed on Earth, two black holes slammed together with unimaginable force, sending shocks called “gravitational waves” through the universe.

Black holes are not visible even with the most powerful telescopes. So how do we know this happened?

On Sept. 14, an international consortium of hundreds of researchers found the proof, sending shock waves of a different sort through the scientific community: They detected the gravitational waves radiating from that ancient collision – the first physical evidence of a phenomenon Albert Einstein predicted a century ago.

The detection of gravitational waves came after a nearly 20-year search – the largest and most ambitious project ever funded by the National Science Foundation – and physicists at the University of Wisconsin-Milwaukee played an essential role.

Confirmation of the waves’ existence opens a radically new window on the universe, said Patrick Brady, director of the Leonard E. Parker Center for Gravitation, Cosmology and Astrophysics.

Until now, astronomical observations were made with forms of radiation, such as visible light, radio waves and X-rays. The long-sought gravitational waves offer an entirely new way to investigate the universe not unlike how lifting the lid on a simmering pot gives away what’s for dinner without looking.

“When Galileo pointed the telescope at the sky,” said Brady, “his views led to the discovery of moons orbiting Jupiter and lent support to the heliocentric model of our solar system.”

Joining Brady in the quest are faculty members Jolien Creighton, Xavier Siemens and Alan Wiseman, along with 26 UWM students and scientists. The UWM team is part of the LIGO Scientific Collaboration, an international consortium of 70 institutions and hundreds of researchers.

“The UWM group has been a key part of the project from very early on,” said Clifford Will, a distinguished professor of physics at Florida State University who is known for his contributions to the Einstein’s theory of general relativity. “They were involved both in building the infrastructure and in resolving issues related to using the data. They were responsible for important calculations that were used to make the detection. Some of those formulas were built into the data-analysis protocol for LIGO.”

Einstein saw space and time as a continuum and gravity as a curvature of that space-time. Like a bowling ball placed on a bed creates a deep indentation in an otherwise flat mattress, so massive objects like stars warp space-time. Their movement creates gravitational waves.

Hunting the elusive waves involves collecting measurements at two U.S. detectors of the Laser Interferometer Gravitational-Wave Observatory (LIGO), which feed copious amounts of data to several supercomputer clusters around the world, including at UWM.

Each LIGO detector has two perpendicular arms that extend 2.5 miles from a central station, each with a mirror at the end. A laser beam is split, with half traveling down each arm and reflecting back off the mirrors. When a gravitational wave passes, it stretches one arm while squeezing the other in an alternating pattern. This causes tiny mismatches in the beams’ round-trip travel time. The detector records this mismatch as an electrical signal which scientists sift through to identify gravitational waves.

To distinguish gravitational waves from millions of other events that also upset the beams’ arrival times, scientists calculate what the signal ought to look like for certain cosmic events – like the merger of two black holes, which scientists predict will cause the strongest waves.

Brady’s main contribution to the LIGO Scientific Collaboration was providing the framework to look for signals in the sea of data.

Brady, who has devoted his academic career to studying black holes, became directly involved in the LIGO search while at Caltech on a post-doctoral fellowship in the mid-1990s. Wiseman and Creighton were doing research there at the same time. Brady joined the UWM faculty in 1998 and was present at the LIGO detector in Hanford, Washington, when it first took science data in 2002.

“Back then, we were inventing the methods to search that much data and inventing the computing methodologies to analyze it,” he said. “It hadn’t been done before.”

Between 2002 and 2010, the observatories found no signals that indicated a gravitational wave. They shut down for a five-year upgrade to increase their sensitivity and began operating again in September 2015.

Within days, Advanced LIGO, as the facilities are now called, uncovered a signal that scientists quickly identify as a gravitational wave.

“We were involved in the pre-run stage – the dress rehearsal – when the signal arrived and we had to stop what we were doing and begin analyzing,” Brady said.

The discovery is described in a Feb. 11 article in the journal Physical Review Letters. Twenty of the more than 1,000 scientists listed as authors were from UWM.

Brady didn’t expect black holes to cause the first detection.

“We’ve never seen a pair of black holes before. This was the example that we all thought of as being the beautiful result of our experiment. We all hoped for it, but we never thought it would be the first thing we saw.”

The LIGO instruments also allow scientists to convert the gravitational wave signals into sound waves so that astronomical events can be heard.

When two black holes merge, for example, a “chirp” or “whirl” represents the spiraling together of the holes just before they collide.

“The spiral can go on for tens of thousands of years,” Brady said. “The sound we hear is the identifying signal of the last few seconds of the process.”

“We knew within three minutes that the detectors had seen something,” said Caudill, who ran the analysis that confirmed the signal came from two black holes.

The LIGO group at UWM has been supported with sizable grants from the National Science Foundation. UWM has received nearly $29 million for the project in the past decade, with part of it going toward the construction and operation of a supercomputer cluster in the Physics Building.

Wiseman and Bruce Allen, who is now director of the Max Planck Institute for Gravitational Physics in Germany, were the main architects of UWM’s computer hardware.

Computing power was expected to be a critical need from the start, and construction of the cluster at UWM began about the same time as the LIGO Scientific Collaboration formed in 1997, Wiseman said. Today, the UWM cluster is one of several that comprise the LIGO Data Grid, the network of supercomputers needed to scour the voluminous data accumulated in the search.

“A well-established gravity research group at UWM put us in a good position to make computing contributions by the time the collaboration formed,” Wiseman said.

For example, once LIGO data is recorded digitally, it’s transported to many computing locations. UWM scientist Scott Koranda developed the method now used to replicate the data so it can be sent to multiple sites.

Creighton is the principal investigator of UWM’s LIGO scientific research grant. Interpreting what gravitational wave signals tell us about the universe is one of his interests.

For him, LIGO is a family affair. Creighton and his younger brother, Teviet, share an interest in astronomy and physics, particularly gravitation. Jolien went to the University of Waterloo for graduate school to study quantum gravity, while Teviet headed to Caltech to work under Kip Thorne, co-founder of the LIGO facilities.

“Toward the end of my graduate work, I became more interested in gravitational waves,” Creighton said. “I went to Kip’s group as a postdoc so I overlapped with my brother, who was also with the LIGO project there.”

Interpreting the reams of data

The UWM physicists and their collaborators – many of them former students – also developed and implemented the analytical tools needed to retrieve gravitational wave signals from the LIGO data.

“The [detector] delivers an electric signal that’s related to a gravitational wave signal, but you need to calibrate the data to see it,” said Siemens, who co-chaired the LIGO Scientific Collaboration’s Calibration Team.

Calibration is the first part of the data handling system created at UWM, which also serves as the alarm system that notifies project members when the instruments have detected a signal worthy of closer examination.

Promising data is uploaded to a database and team members around the world are notified. At that point, a painstaking process begins to verify the discovery.

The team has automated the initial process and can upload a candidate within minutes of acquiring the signal. The verification, however, might take weeks, or even months.

Advanced LIGO’s first data-collection ended in mid-January, and the scientists have not yet analyzed the full dataset, so more detections from the first run remain a possibility.

This wouldn’t surprise Wiseman who noted that Advanced LIGO was designed to be so sensitive that if it didn’t detect an event, that information would be just as significant. It would mean their theories could be wrong.

“Gravitational waves will turn out to be the only way to uncover some cosmic phenomena,” he said.

UWM is leading the charge to help develop the new branch of astronomy that gravitational waves have opened. Siemens heads a consortium of 11 U.S. research institutions that are monitoring millisecond pulsars to find and study the waves.

Pulsars are rapidly spinning, super-dense remains of dying stars that emit beams of light like lighthouses. As the regularly timed beams pass by Earth, scientists expect them to be disrupted by gravitational waves. The consortium, called the NANOGrav Physics Frontiers Center, is backed by $14.5 million from the National Science Foundation.

Just as the gravity center established by Leonard Parker and John Friedman molded the current faculty working on LIGO, Brady, Wiseman, Creighton and Siemens are educating the next generation of scientists.

“Perhaps 10 percent of people in the LIGO project have worked and studied at UWM as students or postdocs,” Siemens said.

One student is Alex Urban, who was at the LIGO detector in Louisiana as part of a fellowship when the signal was found.

“I had a hard time thinking of it as something real,” said Urban. “No matter how much you work on it, until you make a discovery, it’s just an abstract thing in your mind.”

While Urban is contemplating how the discovery will aid in his forthcoming career as an astrophysicist, Brady is basking in the thrill of a dream attained.

Three days after the discovery, he was walking across a park early in the morning on his way into work. “It was a beautiful day,” he remembered, “and I had this big grin on my face.”

He was thinking about the magnitude of the discovery. “And I thought, ‘Yeah, this is why we’re in the game.’”