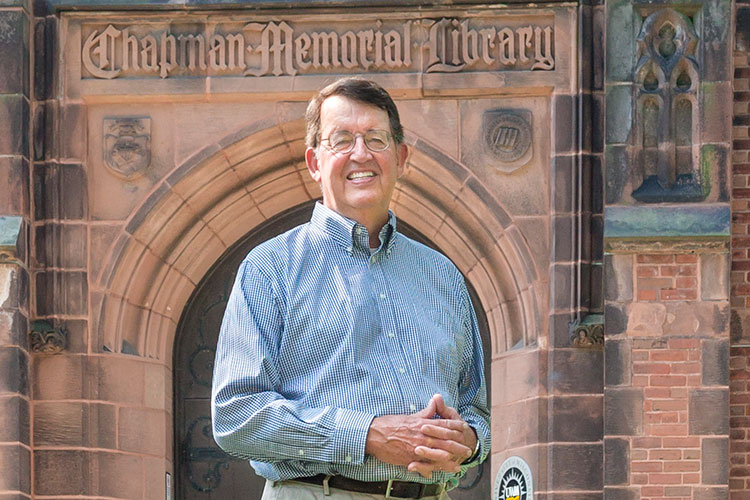 Historian John Schroeder was UWM's chancellor from 1990 to 1998. His new book chronicles the first 60 years of the university's history. (UWM Photo/Elora Hennessey)

John Schroeder is the ideal person to tell the rich and diverse story of the University of Wisconsin-Milwaukee. In addition to being a professional historian and a UWM faculty member for more than 40 years, he served as chancellor from 1990 to 1998. So in 2012, university officials approached him about writing an updated history of the institution. The result is a new book, titled “University of Wisconsin-Milwaukee, The First Sixty Years, 1956-2016.”

Over his career, Schroeder has written seven books, mostly about 19th-century naval history. This one — which will be available in the Panther Shop at the UWM Student Union and at Boswell Book Co. — is different, and close to his heart.

“I wanted to write a coffee-table book,” he says frankly. “People can thumb through it and read the captions, but I wanted a solid narrative text.”

The last in-depth book on UWM’s history was published in 1992, “The University of Wisconsin-Milwaukee: A Historical Profile, 1885-1992.” The original idea was for Schroeder to build on the previous work with a sequel, but the past 20 years didn’t seem like ample material for a book, and he couldn’t settle on a clear theme.

Then, in 2016, the prestigious Carnegie Classification of Institutions of Higher Education recognized UWM for “highest research activity.” This Research 1 status – R1 for short – put UWM in the same category as the nation’s most renowned research institutions, such as Stanford, MIT and UW-Madison.

“It was a real achievement for us,” Schroeder says, “and it dawned on me, here’s your book. Now we had a narrative arc.”

So Schroeder set out to write a modern history of UWM, from its official debut as the University of Wisconsin-Milwaukee in 1956 to that milestone achievement in 2016. “From Year 1 to R1,” Schroeder says. He chronicles the vision for an urban university and a major research center in Milwaukee – including the opposition to that vision.

In the book, which includes nearly 200 photos, he describes some of the many challenges UWM has faced and overcome: from the initial fear other state schools had about competition from UWM to struggles over funding and programs.

But with the resources available, “we did a pretty good job,” Schroeder says.

“As Dr. Schroeder points out,” UWM Chancellor Mark Mone writes in the book’s foreword, “there have been considerable challenges along UW-Milwaukee’s path to becoming an R1 university. Yet, rising to those challenges with steady leadership and foresight, UWM has prevailed, again and again meeting the needs of Wisconsin.”

Among UWM’s chancellors, Schroeder’s departure from the post was unusual: He returned to the classroom and the library. He’d already served longer than the median time for a university leader, and the minuses of the job were beginning to outweigh the pluses.

Also, he remembered the advice he got from Frank Zeidler, the former Milwaukee mayor who stepped down after three terms: “Don’t stay around too long.” Having followed that advice, Schroeder says the happiest time of his career came between 1998, when he left the chancellor’s office, and 2012, when he retired from the faculty.

In writing the book, Schroeder relied on the university’s archives and on his own memory, which covers about three-fourths of the school’s history. He arrived as a history instructor in 1970, when UWM was still in its adolescence, a fact that he’s grown to appreciate with time.

If he’d spent his career at an older, more established school, Schroeder says, “I would not have seen the development and growth and change in the institution. And to be a part of that, it’s neat. I spent my entire career at UWM, and I’m very proud of that.”