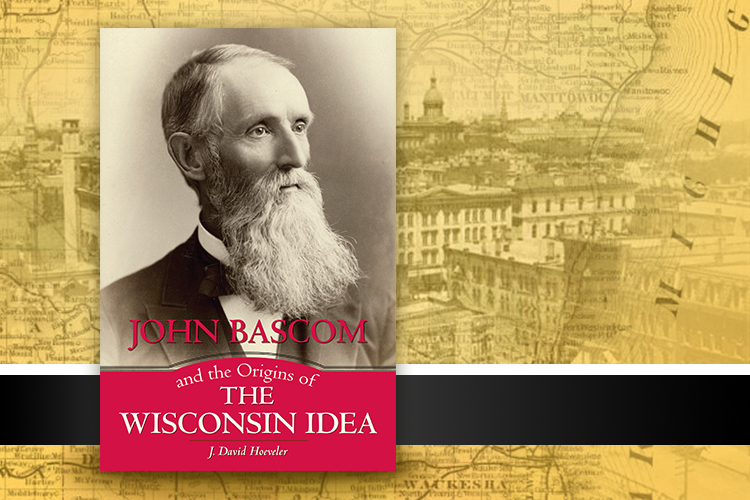 The concept of “The Wisconsin Idea” is attributed to a 1904 speech by then-UW president Charles Van Hise, but its true origins lie in the thoughts and leadership of John Bascom, UW president from 1874 to 1887. J. David Hoeveler, distinguished professor of history at UWM, explores how Bascom’s views of a university deeply engaged in the development of its state came to be widely viewed as a national model.

Consistent with his course of action on temperance and women’s rights Bascom looked to the state for responses to the social question. He brought to this subject some general principles and some specific proposals. He had always held a Whiggish view of the state and its role in promoting a national economy. But Bascom also reinforced in the Whig political party outlook its connection of economic behavior and moral programming. And here his views became more egalitarian. A moral society, he believed, will exercise vigilance in assuring a fair distribution of its wealth, the more so as the industrial age created both vast accumulations by some individuals and impoverishment by many. “Large production,” Bascom wrote, “must in any long period go hand-in-hand with relatively just and generous distribution.” “Relatively just.” Bascom did not support socialism, as will be noted. Without the public monitoring, though, economic forces, acting wholly under private control, will create huge disparities of income, even to the point of destroying the very system from which they derive. The state cannot remain indifferent. Furthermore, Bascom believed, the state has full right to decide how much of private wealth it will protect. Assuring “proximate equality,” preventing one class from being permanently disabled, restoring those who have fallen—all these imperatives of the ethical state impose on it a “conscientious watchfulness.”

This whole discussion, Bascom believed, would gain from severe modification of the public/private dualism that prevailed in the American mind. All modern knowledge conspired against dualistic thinking, he asserted, and nowhere more importantly, he hoped, would it gain than in its social corrections. He made the point clearly in his last address at Madison, the baccalaureate of 1887 that he titled “A Christian State.” How often does the “man of enterprise” claim for himself the entire results of his industry? Bascom asked. But the great merchant with connections through the nation and into the world, owes much to the protections provided by his own government, that is, to “the organic state of his fellow citizens.” Yet the captain of industry resents any claims made against him by the public, and he demands unlimited utilization of the rewards wrought by his “private powers.” Bascom allowed that government has among its most important responsibilities the protection of private property. But, he added, “large accumulations . . . of wealth, which are possible only through the mechanism of society, must submit themselves in justice to the safety of society.” Furthermore, he added, the state has an interest in reducing the social toll of private enterprise, as in the damage done by the liquor trade, but in the effects of low wages as well. Again, he raised the public interest to first priority. “Trade that profoundly touches the common weal,” he told his students, “must, in justice, be governed by that weal.” That idea fit perfectly Bascom’s ideal of “the Christian state.”

Those claims of society led directly to taxation, which headed Bascom’s list of specific reforms needed to meet the ideals of his sociology. Taxes constitute the fair assessment against those who gain most from the state’s services and protections, he argued. Bascom promoted taxation at a time, of course, when that levy had played much less a role in the national economy than it does now, so the very principle needed a defense. Bascom made part of that defense a class issue and again used the baccalaureate address at UW as his forum. “Has the state no right to tax rich citizens for the commonweal,” he asked, “and has it the right to marshal its poor citizens into its armies, and bid them lay down their lives for that same commonwealth?” Taxes that do now exist, Bascom also believed, register all the wrong priorities. They fall too heavily on those “low down in the social scale,” and the laws allow those who can readily pay to escape them. Too much of personal property escapes taxation altogether, he added. Thus, we miss a major point about taxation: its use in effecting greater social equality, in reducing the disparities of wealth and poverty that plague us now. Bascom preferred a graduated income tax and advocated for it even before it existed in the United States. He considered it “the most just ever imposed” because it levies taxes on whom the imposition belongs. Bascom knew what a tough sell that notion presented. “We prefer to let taxes fall on the simple and the feeble, because this is easy, and sets up no barriers in that rapid and unruffled river of enterprise which constitutes the boast of this great nation, and floats its purple sails.” This lament, too, Bascom presented while outlining the parameters of “the Christian State.”

Bascom had some other suggestions for securing greater social equality by means of state action. They did not constitute a long list but they did anticipate measures that became common later in the Progressive Era. For one, he called for taxes on inheritance. Accumulation of wealth and its perpetuation over generations Bascom found unjustifiable. Such perpetuation deprives future generations of opportunities, and confounds efforts to preserve a fair race over the long years. Yet we see again the ideal of individual rights skewing the subject in the interest of the powerful, Bascom complained. But he held his ground. “Death must be a final relinquishment of rights,” he wrote. Besides, he believed, it’s a simple matter: “The world belongs to the living, not to the dead.”

And for another, Bascom urged the creation of municipal franchises. Some economic functions constitute common social possessions, but we place them in the hands of a few. Bascom had in mind railroads, the telegraph, gas companies, water companies, and some forms of banking. He took a very liberal stance here. He reasoned that these enterprises owed their existence “to a certain stage of social development,” the accumulated knowledge achieved by the human race to that point. But they exploited that knowledge to solidify their own operations and control. “These [businesses] are direct outgrowths of the common strength,” Bascom stated, “and closely associated with it. If they are allowed to fall unreservedly into the hands of individuals, they confer an advantage oftentimes very great, correspondingly unequal, and so dangerous to progress.”