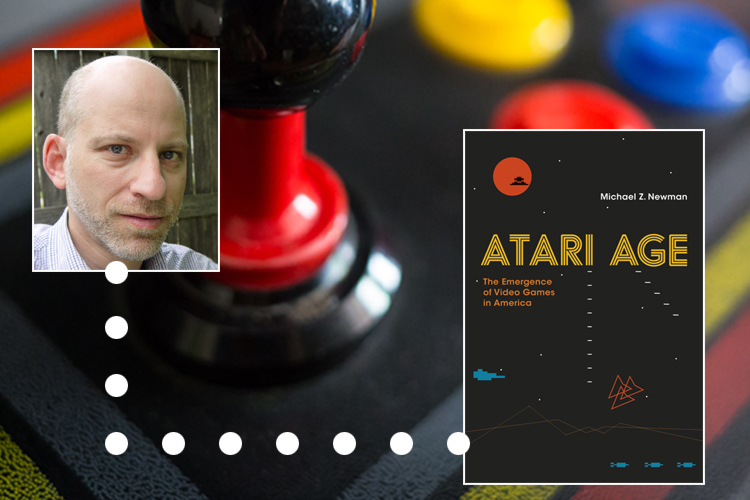 It’s difficult now to appreciate the impact the emergence of video games in 1972 had on American popular culture. As this social history shows, parents, educators and even politicians struggled to determine whether the new entertainment medium was a boon or a menace. One thing was clear: Video gaming was the province of young males. That changed in 1980, writes Michael Z. Newman, associate professor and chair of Journalism, Advertising and Media Studies at UWM.

When Pac-Man was released in 1980 by Namco, a Japanese firm, video games had become well established as a profitable industry and a popular form of public and private amusement, but it was clear to all involved in the video games trade that young and male players were their main customers. Pac-Man was designed to increase the market size for video games by appealing to women in particular, drawing them into the game rooms that had in some ways seemed forbidding to female players or to opposite sex couples. Appealing to women had several virtues for game manufacturers, operators, and arcade proprietors. It not only expanded their customer base, but also brought a measure of respectability to the business and medium of video games. A greater gender balance in arcades and other venues of public coin-op play would have the potential to change their reputation. Women or teenage girls were also regarded as a potential magnet for male customers, under the assumption that boys would follow where the girls are. While it may not have been anyone’s intention to make a more child-friendly game, Pac-Man also had the virtue of being cute and cartoonish rather than aggressive and violent just at the time when games were a cause for concern because of their focus on shooting and killing enemies. Pac-Man would seem less likely than the space and war games to be corrupting the youth.

Toru Iwatani, the young designer who created Pac-Man for Namco, has spoken repeatedly of his inspiration in making a game to appeal to women. The popular games at the time were all about shooting aliens, which was not perceived to be a theme that appealed to female players. In order to get women and couples into game rooms, Iwatani designed Pac-Man to have a specifically feminine draw: “When you think about things women like, you think about fashion, or fortune-telling, or food or dating boyfriends. So I decided to theme the game around ‘eating’—after eating dinner, women like to have dessert.” He has often compared the form of Pac-Man to a pie with a missing wedge: “If you take a pizza and remove one piece, it looks like a mouth. That’s where my idea came from.” The ghosts were inspired not by the sci-fi or space opera tropes of most popular games, but from anime and manga along with American children’s comics and cartoons. The ghosts were like Casper or Obake no Q-Taro. Powering up the Pac-Man by eating an energizer pill was inspired by Popeye eating his spinach to gain the strength to defeat his foe Bluto. In Japan, the game was not initially terribly popular, but it appealed, according to Iwatani, to “people who didn’t play games on a daily basis—women, children, the elderly.” As Tristan Donovan observes in his history of video games, Pac-Man draws on the Japanese concept of kawaii, often translated as cuteness, typified in global popular culture by Hello Kitty. Many observers both in the ’80s and later on identified cuteness as one of Pac-Man’s key appeals, and cuteness has never been aligned with the dominant sensibility of teenage and young adult masculinity in the United States.

The name Pac-Man comes from the Japanese puku-puku, an onomatopoeia that references the sound of a mouth opening and closing. It is named for the act of incessant eating. Originally in Japan the game was named Puck-Man but when Midway licensed the game to release it in the United States, it changed the name to Pac-Man to avoid any vulgar vandalism. Upon its release stateside in October 1980, the game exceeded expectations. In Japan, it had been less popular than the contemporary Namco game Galaxian, the variation on Space Invaders. But in North America, Pac-Man appealed widely to children and women in addition to male players, and to both more casual and more serious visitors to arcades. Its financial impact was staggering: it earned $1 billion in revenue in its first fifteen months in the United States, and the home console version was predicted in the pages of Time to be a bigger money-maker than Star Wars, a widely recycled factoid. America had almost 100,000 Pac-Man arcade cabinets collecting quarters in 1981, and soon enough more than two million Pac-Man game cartridges would be sold to consumers with Atari consoles at home. The release of this ultimately disappointing product, which sold well but was widely regarded as a pale imitation of the arcade version, was promoted by a massive marketing stunt called National Pac-Man Day on April 3, 1982, with public events staged at malls and other public places in many American cities. Pac-Man merchandise from apparel and lunchboxes to wristwatches and drinking glasses was for sale in every department store and souvenir shop. The 1982 World’s Fair, in Knoxville, Tennessee, had not only several game rooms filled with video arcade cabinets, but four Pac-Man souvenir shops selling shirts, mugs, pins, posters, pillows, stickers, Pac-Man Putty, miniature souvenir license plates, tote bags, and a child-size sleeping bag. There were various Pac-Man spinoffs and adaptations, including a tabletop Coleco game, a Bally pinball game, and most famously the feminized version of the game hailing the interest of girls and women, Ms. Pac-Man, which debuted in January 1982 and became hugely profitable in its own right. Pac-Man and Ms. Pac-Man’s unprecedented success were routinely attributed to their ability to get women to overcome whatever reluctance or hostility they had to playing coin-operated video games.

Popular press stories often highlighted the female participation invited by Pac-Man. An NBC News report on May 25, 1982, on Pac-Man Fever noted not only the game’s outstanding commercial fortunes, but also its unusual demographic appeal. An interview with Michael Blecha, a “PacMan Retailer” framed against a wall of Atari cartridges, offered this observation: “Women are insane about this game. Men like the sports games, the action games and the space games. Women like the predator games.” The report continued by showing images of a store selling Pac-Man products including T-shirts, coffee mugs, beer mugs, tote bags, pillows, balloons, hats, board games, books, dolls, hand puppets, and neckties. Pac-Man was a mass market bonanza, a Mickey Mouse for the electronic age. The report concluded with a shot of hands counting money. In the pages of the November 1982 issue of Working Woman magazine, the success of Pac-Man was attributed to “the huge numbers of women who play.” In drawing the familiar distinction between Pac-Man and war games, the author framed video games pre-Pac-Man as an exclusionary medium in which men played and women watched. Pac-Man liberated women from their place by the sidelines. Working Woman explained the appeal of Pac-Man as one of genre distinction: “Video experts believe that Pac-Man’s lighthearted graphics, catchy tunes and the absence of exploding spaceships attract women players.”

A first-person column in New York magazine in 1983 by Jennifer Allen chronicled her descent into Pac-Man addiction, a fix she satisfied at a coin laundry on the Upper West Side of Manhattan where other players around the machines were “skinny and black and … about fourteen years old.” By contrast, she felt “like the chaperone at the party.” Pac-Man became her game upon her first encounter with it at a Catskills resort game room. In contrast to the players at the space/shooting games, the ones who preferred Pac-Man, adults and children alike, were “laughing and talking, better tempered than the dour, determined players who wrestled with Asteroids and Space Invaders.” This more sociable interest in play would put distance between Pac-Man and the more aggressive and violent arcade games, which the writer implied endeared Pac-Man to female players. “There were no explosions or smashups; when a Pac-Man got eaten, the only sound was a droopy, wilting noise, the kind that might accompany a clown making a sad face.” The news interest of this story, which appeared in 1983, would have been not just the topicality of the video games craze and of Pac-Man Fever as an emblem of all that, but also the man-bites-dog quality of a grown woman being a serious player of video games.

All of this newfound feminine appeal occurred just at the moment of media panic around video arcades, just as moral authorities and guardians of virtue agitated for regulation of game rooms and video game cabinets in the name of protecting youth from this fresh danger. One reason why Pac-Man and its many spinoffs were so welcome in game rooms, stores, and the many other spaces of play was that girls and women were regarded so favorably by proprietors of these venues. Unlike male patrons, girls and women were not often seen as corrupting or threatening influences. On the contrary, their presence was reassuring of the wholesomeness of a space and of the activities going on within. According to one study of young people’s attitudes about games and arcades, some female patrons worried that their presence in game rooms filled with pinball and video machines was somehow improper, but changing the image of games could change this perception. The campaign in the coin-op trade to increase female patronage was good business not just in the sense of attracting more customers, but also in the sense of remaking the image of coin-operated amusements as legitimate and culturally worthwhile.

By appealing too much to “loners” and “losers,” the coin-op trade risked its reputation. In a polemical column in a January 1982 issue of the coin-op trade paper PlayMeter, Marion Cutler and Jane Petersson argued that this reputation was critical to the fortunes of the whole industry, and that “distaff fans” of video games were crucial to turning things around: “Women—more than zaps, lights, or electronics—are the signal that the game has become respectable.” They made an impassioned case that the taverns, arcades, and other spaces of electronic play had been inhospitable to female patrons not just because they were shady or dusty or unsafe, but also because the games themselves were a big turn-off: “With half-naked female figures and gigantic ‘zooms’ and ‘zaps’ forming the backgrounds, pinball and electronic games and their surroundings fairly shriek ‘Men Only!’”

The imperative to get women into arcades could be accomplished by recognizing their newfound social and economic mobility in the wake of second-wave feminism. The coin-op trade could capitalize on women’s expectations of equality and their increased spending power by offering experiences of leisure and play hospitable and desirable to them. If women expected to be treated as equals and to have opportunities to enter any realm open to men, they would naturally find their place in arcades and game rooms. But this might necessitate catering to them to win this business. It might be particularly appealing, Cutler and Petersson argued, if the spaces of play could become sites of courtship—pickup or date spots. The appealing scenario they offered PlayMeter readers, typically men in the amusements trade, was that upwardly mobile women would begin to patronize their businesses as not only an expression of their equality with men, but also as a way of meeting eligible bachelors. In the early 1980s, when girls and women were discussed as potential patrons spending money on video games, ideas about romance and courtship were often part of the story.

Excerpted from Atari Age: The Emergence of Video Games in America by Michael Z. Newman. Published by The MIT Press.  Copyright 2017.  All rights reserved.