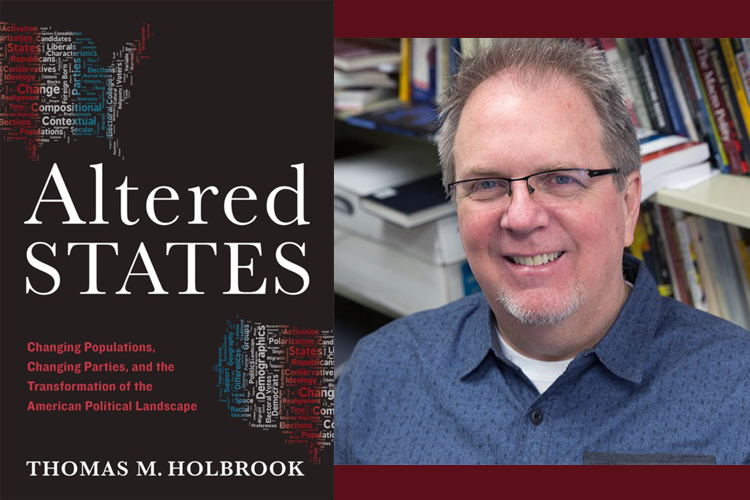 While the 2016 presidential campaign has confronted the GOP with some unusual challenges, UWM political scientist Thomas Holbrook offers an analysis of the political landscape that suggests a longer-term problem for the party: Between shifting party loyalties and demographic changes, the Electoral College math reveals a structural advantage for Democratic candidates.

This book was motivated by two related propositions, each of which attracted increased attention with Barack Obama’s election in 2008 and gained credibility with his re-election in 2012, almost to the point of becoming conventional wisdom. The first proposition is that there has been a shift in power over time that resulted in something like a Democratic “lock” on the Electoral College; that Democrats have built winning margins in the right combination of states to put Republicans at a significant and potentially long-term disadvantage. The second proposition, typically offered as a potential explanation for the shifting balance in the Electoral College, is that changes in state demographic characteristics—in particular changes in the racial and ethnic composition of key states—have moved some states from the Republican to the Democratic column. Evidence presented in the preceding five chapters shows that while there is some truth to both propositions, the full story is a lot more complicated, nuanced, and, frankly, interesting.

There has indeed been an apparent shift in the relative strength of the two major parties in the Electoral College. From 1972 to 1988, Republicans won the presidency in four of five elections, but only won two of the next six elections between 1992 and 2012. As telling as the wins-losses comparison is between these two periods, the differences are not necessarily indicative of shifting strength in the Electoral College and are not evidence of changes in the geographic bases of party support. In fact, a comparison of the two eras suggests that the main problem for the Republican Party has been their inability to muster enough popular votes to provide them with an edge in electoral votes. However, this does not rule out changes in built-in party advantages in the Electoral College, changes that could make it more difficult for the Republican Party to win the electoral vote in close elections. In fact, this is exactly what was shown in the analysis of hypothetical Electoral College outcomes in close popular vote contests (Chapter 1). What had once been a slight Electoral College advantage for Republicans in simulated 50/50 outcomes has changed to a slight Democratic advantage in the last several election cycles. What’s more, what was once a substantial Republican electoral vote margin in scenarios in which their share of the national two-party vote was 51% has dwindled to a very small advantage. By this account, there has been a change in the relative power of the two major parties, but something more along the lines of a tremor than a seismic shift. To be sure, Democrats are better positioned now than they have been in the past several decades, but their position is best characterized as a slight advantage rather than an electoral “lock.”

By contrast, if you look “under the hood,” so to speak, at changes in party strength in the states, the movement over time has been truly substantial for many states, and the net impact of shifting state loyalties is such that it could certainly produce the observed changes in the Electoral College. Changes in party support in the states flowed in myriad directions, including some states that moved sharply in the Republican direction, some sharply in the Democratic direction, while others moved less dramatically, and still a few barely moved at all. There were a few overall patterns that seemingly worked to the benefit of Democratic presidential candidates. First, although there were nearly equal numbers of states moving in each direction, the number of electoral votes associated with states that moved Democratic far outstripped the number associated with states that moved Republican. In addition, the same pattern exists if we focus on states that are more consequential to Electoral College outcomes, those states whose competitive status has changed over time. Another pattern that could work to the benefit of Democrats, at least in terms of making gains in new territory, is that most of the Republican gains over the past several decades have been in states where they already enjoyed an advantage. This pattern of consolidation stands in stark contrast to the Democrats, whose gains were mostly made in previously competitive or Republican states, representing a tendency toward penetration rather than consolidation.