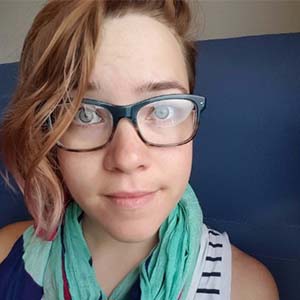 Cyndi nindizhinikaaz. onjibaayaan zhigaagoodena, daayaan Minowakiing. Aawiyaan Odawa’ikwe. ndoodem nimikii.-- (In Anishinaabemowin: I am called Cyndi, she is from/ grew up in skunk-town [Chicago, IL], and currently lives in the good land [Milwaukee, WI]. Cyndi is an Odawa woman [Grand Traverse Band and Grand River band] and belongs to the Thunderbird clan.
Cyndi provided a brief introduction about herself in her family's heritage language, Anishinaabemowin. She is a current student in Language Instruction (Anishinaabemowin/ Ojibwe) in the Post Baccalaureate certification program at University of Wisconsin-Milwaukee. Cyndi decided to pursue a post-baccalaureate degree after completion of her BA degree in Linguistics and American Indian Studies at UWM.
As an undergraduate, Cyndi conducted research at the Walker’s Point Center for the Arts (WPCA) for four semesters. Her research utilized community-based research methods to highlight Indigenous Artists through an art exhibit called Native Voices at WPCA, with the running of the exhibition from March 2018-May 2018. Cyndi is an Alumni of the Young People For (YP4) fellowship (2016-2017) and serves as a second year mentor for YP4 Fellows. In addition, Cynthia served with AmeriCorps (2014-2016), City Year Seattle (2014-2015), and Play works Wisconsin (2015-2016).