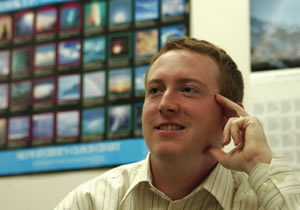 **Light Refreshments will be served beginning at 1:30pm in EMS E424A**

Title:
How much confidence can we have in precipitation forecasts for the Southeast United States?

Description/Abstract:
30 years of precipitation predictions from NOAA’s second-generation reforecasts are evaluated over the southeast United States, using equitable threat score, bias, and ranked probability skill score. The reforecasts are approximately consistent with the operational version of the 2012 NOAA Global Ensemble Forecast System (GEFS). Analysis of the verification metrics highlights the variation in the ability of the GEFS to predict precipitation across amount, season, forecast lead-time, and location. Beyond day 5.5, there is little useful skill in quantitative precipitation forecasts (QPFs) or probabilistic QPFs. For lighter precipitation thresholds, use of the ensemble mean adds about 10% to the forecast skill over the deterministic control. QPFs have increased in accuracy from 1985 to 2013, likely due to improvements in observations. The creation of a long-term collection of forecast verifications is a first step toward the ability to distinguish weather regimes that the GEFS typically predicts well from those regimes that the GEFS typically predicts poorly. To search for these regimes in the collection, Day 1, Day 3, and Day 5 forecasts were first ordered from highest to lowest equitable threat score (using a 20 mm threshold). Forecasts that were in the top 10% of this ranked list were considered to be “good” forecasts, while those in the bottom 10% of the list were considered to be “bad” forecasts. Approximately 250 forecasts comprised each category for each forecast lead-time. These forecasts were then further stratified into meteorologically meaningful categories, using divisions such as the magnitude of synoptic forcing, the percent of precipitation that was convective, and the amount of moisture transport. The distribution of cases in all categories will be presented, along with case examples and composites.