History of the Roberto Hernández Center 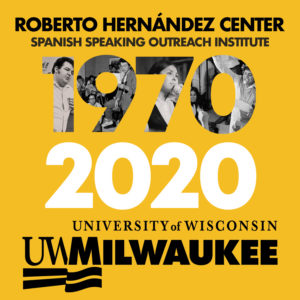 The Latinx community in Milwaukee had grown steadily since the turn of the twentieth century, and by 1970 there was a vibrant population of at least 30,000 in the city. This community faced an array of urban social issues, including unemployment, competition for housing, lack of social programs, and under-representation in educational institutions. Although a number of Latinxs worked for the University of Wisconsin-Milwaukee, only 12 students were enrolled during the 1970-1971 academic year. Many Latino activists attributed this low enrollment to a lack of support at the university: few administrators or advisers spoke Spanish; there existed no support center for Latinx students, and there were no means of transportation to the Kenwood campus. The absence of these resources provided very little incentive for Latinx students to enroll at UWM.

Officials from the UWM School of Education began outreach efforts in the late 1960s, working with the newly established Committee for the Education of Latin Americans (CELA) to develop plans for a Spanish Speaking Outreach Institute (SSOI) to be housed within the school. It quickly became apparent to education administrators, however, that the proposed scope of such an institute was beyond the ability of the School of Education to implement, and they suggested that Latino activists take their proposals directly to the Office of the Chancellor. Members of CELA, led by Roberto Hernández, did just that, staging sit-ins, protests, and camp outs at the office of J. Martin Klotsche during the late summer and fall of 1970. Their efforts proved fruitful: in November 1970, UWM opened its Spanish Speaking Outreach Institute, a forerunner of today’s Roberto Hernández Center.

Excerpt above from UWM Libraries Digital Collections.  Visit UWM Latino Activism Collection for a visual history of the origins of the Roberto Hernández Center.

The history behind the Roberto Hernandez Center at UWM (wisn.com) Interview by Diana Gutierrez 9/30/21

Who was Roberto Hernández? Roberto Hernández was one of the most active Latino leaders in the city of Milwaukee during the 1970’s. In the late 1960’s, he was one of less than a dozen Latinos enrolled at UWM. He became one of the leading voices in the Latinx community’s efforts to increase Latinx access to and representation at the university, negotiating with administrators for the creation of the Spanish Speaking Outreach Institute (SSOI) in 1970.

As chair of the negotiating team for the Council for the Education of Latin Americans (CELA), Hernández presided over the committees that chose the first SSOI director and staff. He was also one of the key individuals that helped to negotiate the first language maintenance bilingual program in Wisconsin and assisted in the enactment of Wisconsin’s first Migrant Worker’s Act.

After leaving Milwaukee, Hernández continued his youth and community advocacy in Texas where he was regarded as one of the most successful organizers and social transformers. In 1994, Hernández died prematurely of a heart attack.

Roberto Hernández was a major force in shaping the collaborative work of Latinos in Milwaukee. One of his goals was to work towards educational advancement and a better life for all Latinxs in and around the Milwaukee area. It is our hope that this Center, dedicated to his memory in the 1990’s, will make important contributions towards the advancement of Latinxs in Milwaukee and the rest of the state.