View All Updates
New to UWM?
Research Portal
Her inquiries into the lives of women in the early modern period helped establish the field of women’s history. 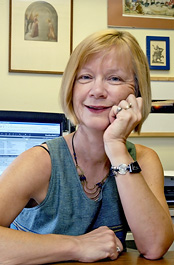 In the early 1970s, many advocates of rights for women in the present day began to realize that their knowledge of the past was incomplete. History books generally described the male experience, though it was portrayed as universal. But scholars who then looked back at the lives of women soon discovered complications.

“Focusing on women often disrupted the familiar categories, forcing us to rethink the way history was organized,” UWM Distinguished Professor Merry Wiesner-Hanks recalled in her 2001 book, Gender in History.

Through the growing pains of the field of women’s history—new questions, new paradigms—Wiesner-Hanks emerged as a central figure, and she has become a recognized expert in gender and sexuality in the 16th and 17th centuries.

“We were really creating a new field of history and we were asking the kinds of questions that people had never thought of before,” she says in an interview. “Any historical event would be different for women than it would be for men. It seems like it’s totally self-evident.

“To watch something go from being bizarre to being self-evident in 30 years is quite dramatic. And that’s been really fun.”

Since the late ’90s, Wiesner-Hanks has been asking more new questions making another area of inquiry self-evident: global history.

“It’s become totally bizarre to ask something about history if we don’t ask the questions, ‘What are the global ramifications? How did this play out somewhere else in the world or what did it have to do with other things going on in the world?’ ” she says. “That’s not something I asked for the first 20 years of my own work.”

Wiesner-Hanks’s involvement in global history was a key factor in the UW System’s 2004 approval of the History Department’s Ph.D. program.

Wiesner-Hanks is also a recognized scholar on the Reformation, which was part of the reason she was hired at UWM in 1985, after six years at Augustana College in Illinois.