View All Updates
New to UWM?
Research Portal
Her writings on psychoanalysis, literary theory, and women’s studies have provided an influential voice for feminism. 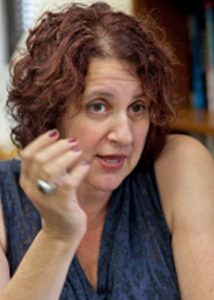 In the words of one of her colleagues, Jane Gallop is “a brilliant feminist theorist whose work has received national and international recognition.” She is prominently known for her books and essays on the overlapping fields of psychoanalysis, literary studies and women’s studies.

Her work has been praised as “useful and influential to a wide range of groups, including scholars and students.” She has been called one of the most prominent voices in the younger generation of feminist theorists. She is credited with influencing the work of other post-modernist scholars worldwide. One of them, from Australia, notes that her books provide a model that anticipates the development of feminist methodology. He notes that Gallop’s works demand serious consideration and respect.

At the moment, the professor of English and Comparative Literature is revisiting her 1970s doctoral thesis on the writings of the Marquis de Sade. Although Sade’s writings date from the 18th century, Gallop believes they remain relevant today. “Unfortunately, concepts about women have changed less over the years than one would imagine,” she says. “For instance, it was difficult then—and now—for men to consider both the maternal and sexual roles of women.” She also believes, “Sade’s writings were controversial for his time, and he remains controversial today.”

Gallop’s writings also focus on seminal psychoanalysts such as Freud and the Frenchman Jacques Lacan (1901-1981). Reading Lacan (1985) remains the most popular of her scholarly volumes, and many consider her writings on Lacan to be her most influential. She also received international attention for another book, The Daughter’s Seduction: Feminism and Psychoanalysis (1982).

Her most recent book, Living with His Camera (Duke University Press, 2003) focuses on the relationship between photography as art and photography as family history. Gallop explores how the photography of her longtime partner, UWM film professor Dick Blau, chronicles their relationship and also relationships between them and her children.

Among other things, the book is a tribute to Gallop’s own philosophy. “The real test of knowledge is this: Does it help you live your life better?”