View All Updates
New to UWM?
Research Portal
He has revealed the busy lives of tiny zooplankters with innovative high-speed video. 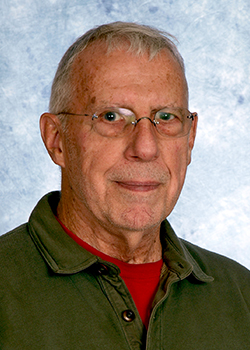 J. Rudi Strickler has spent much of his career revealing the activities of aquatic species that have discriminating tastes in food, an acute ability to distinguish among other species, and delicate and precise mating rituals. He has developed innovative techniques to capture the animals’ often-rapid movements on video. Are they fish? Whales? Actually, they’re zooplankters, the tiny, ubiquitous creatures that live in both marine and freshwater environments. Given their important position near the bottom of the aquatic food chain, learning about their behavior is of no small importance.

Zooplankton survival had long been attributed to chance encounters; indeed, the term plankton is derived from a Greek term meaning “wandering” or “drifting.” But by developing innovative high-speed video equipment beginning in the 1970s, Strickler was able to prove that the tiny animals’ movements to capture food and avoid predators were more discriminating and purposeful.

Since coming to UWM in 1990, the Shaw Distinguished Professor of Biological Sciences has focused on the most challenging question: how do the animals mate? Strickler has built equipment and created infrared environments that allow him to see the zooplankters’ distinctive trails that reveal their identities to potential mates or predators. He and his collaborators have also learned how carefully males must proceed when pursuing mates to avoid being eaten by the females.

Strickler’s videos have helped him answer many important questions, but they also served another purpose: shrewd marketing.

“With every observation comes two other questions,” he says of his research. “You can’t solve them all in your lifetime, so you have to get others interested.” At scientific meetings where Strickler made presentations, attendees might skip sessions here and there, “but they for sure came to my talk because there was a movie. A scientist has not only to be an interesting person; he has also to be smart. You can be highly intelligent, but can’t sell your message.”

Strickler accompanied his images with stories, giving the animals names (Fred and Fritz), and referring to them as he’s and she’s.

“The revolution that I started is to make the people aware that the animals are not just dead things in the microscope, that they have their own lives, and that you should know what is their life, what are the rules of their life, and how is it organized.”