View All Updates
New to UWM?
Research Portal
An internationally recognized expert on the effect of metals on biological systems. 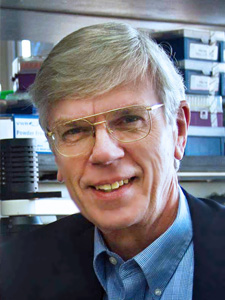 As a professor of chemistry at UWM since 1971, David Petering has become an internationally recognized expert on the effect of metals on biological systems. He is director of the Institute of Environmental Health at UWM, as well as director of the Marine and Freshwater Biomedical Sciences Center, supported by the National Institute of Environmental Health Sciences and housed at the UWM Great Lakes WATER Institute.

One area Petering studies is the chemical and cellular mechanisms of “metallodrugs,” such as iron Bleomycin. An anti-cancer drug used primarily in head and neck cancers, Bleomycin is typically used in combination with other drugs. It may be prescribed as part of a so-called “drug cocktail” to treat Kaposi’s sarcoma (usually in patients affected by HIV/AIDS).

Bleomycin—a natural substance obtained from a microorganism—breaks up the DNA genetic material in cancer cells, effectively stopping them from dividing and spreading throughout the body. To understand how this happens, Petering and his team sought an analogous substance that would reveal the drug’s structure. “After many attempts, we found that cobalt bleomycin served as an excellent model for iron bleomycin,” Petering says.

“The only way one can move forward with new ideas is to possess the understanding of how a process works. That forms the foundation of knowledge.”

A pioneer in mettalodrugs, Petering is equally known for what he calls “the other side of the coin”—his research on metal toxicology, the harmful effects of metals. Petering has been a leader in measuring potentially toxic exposure to harmful metals in the environment and in the workplace. One such metal, cadmium, can accumulate in the soil where tobacco is grown. When smokers inhale, traces of cadmium are transferred to the body, where it affects a smoker’s kidneys, bones, and lungs. Petering was among the first to show how cadmium is toxic to the kidney. He is also recognized for his studies on the protein metallothionein, which protects cells against cadmium.

A third area of Petering’s research centers on the body’s metabolism of zinc. He has made major contributions to the area of tumor cell zinc biochemistry.