View All Updates
New to UWM?
Research Portal
The accomplished researcher and entrepreneur has a strong track record of stimulating multidisciplinary work. 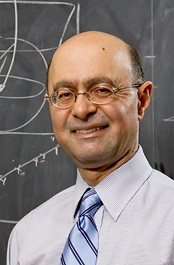 Theoretical physicist Abbas Ourmazd has always been interested in doing what others consider impossible.

“To tackle problems which people have generally thought requires a big hardware solution, and then to show that you really don’t need machinery,” he says. The machine is necessary, he’s quick to add—but the key is to combine experiment with theory.

“The quickest way of creating value is to use your brain.” Ourmazd explains, “That’s also the cheapest tool you’ve got!”

Since coming to UWM in 2005—initially as its first vice chancellor for research and then as a physics faculty member—Ourmazd’s research has proven the point, beginning in classic fashion.

“I actually had an idea in the shower,” he recalls, “that maybe we can determine the structure of individual proteins, biological molecules.”

“Nobody knows the atomic structure of a living cell to any detail,” Ourmazd explains. “We take guesses, but nobody’s actually taken a picture of a whole cell at atomic resolution.”

Ourmazd’s idea in the shower led him to assemble a team of UWM researchers, which has developed a novel technique of high-resolution protein imaging that was featured on the cover of the journal Nature Physics in January 2009.

“But the exciting thing about it is we’re really just scratching the surface,” he says.

In the 1980s and early 1990s Ourmazd worked at Bell Laboratories in New Jersey, where his positions included head of Microphysics Research and head of Wireless Strategy. While there, Ourmazd and his research group pioneered quantitative transmission electron microscopy (QUANTITEM), which can be used to determine the number of atoms in columns of a crystal in certain directions.

Using electron holography, he and his group were the first to map the electric fields inside materials and devices at nanometer resolution. Such fields turn microelectronic devices on and off.

“The remarkable thing is, a $200 billion industry was devoted to making microelectronic devices, without anyone having ever having seen whether the fields inside were as we thought they were.”

In addition to his research, Ourmazd has been widely recognized for his entrepreneurial accomplishments. He co-founded two German high-tech companies: Lesswire AG in 1999 and Communicant Semiconductor Technologies AG in 2001. His restructuring of the German national laboratory IHP has been called “an extraordinary success story,” by Wolfgang Schröter of Georg-August-Universität in Goettingen. Ourmazd “promoted this laboratory from an internationally nearly unknown status to high international reputation.” Of his career, Schröter says, “Dr. Ourmazd has designed a series of visions and ambitious projects and developed quite unusual strategies and methods to realize them.”

Ourmazd has published 130 papers, received 10 patents, and has been invited to give over 250 presentations nationally and internationally.

His awards include an Alexander-von-Humboldt Fellowship, and the Johnson-Matthey prize. He is also a Fellow of the American Physical Society.