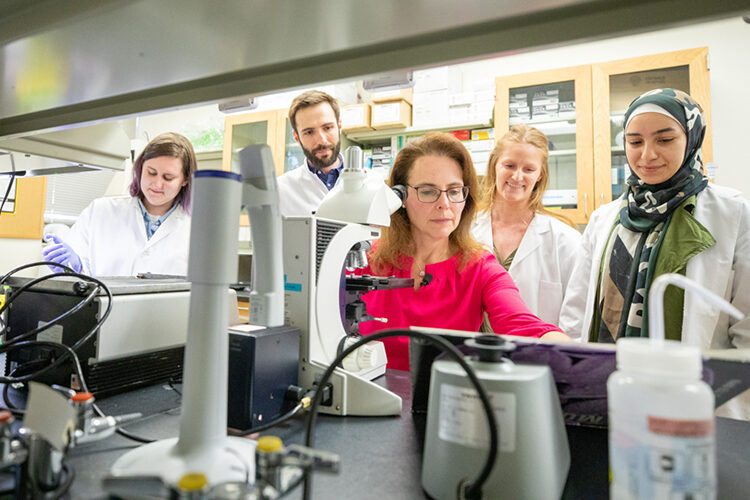 Karyn Frick (seated) and members of her lab – Miranda Schwabe (from left), Gustavo Dalto Barroso Machado, Sarah Beamish and Farah Abdelazim – have recently published research that shows why some women with Alzheimer’s disease benefit from taking estrogen therapy, while others do not. (UWM Photo/Troye Fox)

The hormone estrogen is essential for proper functioning of memory, but it declines when women reach menopause, putting them at a higher risk than men of developing Alzheimer’s disease.

However, studies of estrogen therapy show the hormone improves brain function in some menopausal women, but not others.

Working from previous research on late-stage Alzheimer’s, a research team at the University of Wisconsin-Milwaukee has found new information that points to the reason.

Those at highest risk for developing the disease are over age 60, female and carry a specific variant of a gene that everyone has, called APOE. The gene codes for a protein that captures lipids in the bloodstream and carries them into cells for disposal.

A gene often has multiple versions, meaning their arrangement on a DNA strand varies, resulting in different traits, such as eye color. Most variants do not lead to development of disease.

Every person carries two APOE variants, and those with two E4 variants are at greatest risk of Alzheimer’s. Frick’s team confirmed this when they tested older female mice and found that animals with two copies of E4 did not respond to estrogen treatment cognitively, but those with one or two copies of E3 did.

The UWM researchers think that the E4 variant may contribute to Alzheimer’s by poorly performing the gene’s main task of transporting lipids into cells for disposal or conversion into other substances.

“E4 doesn’t do as good a job of clearing lipids and carrying them into cells as E3 and E2,” Frick said. “That’s important because amyloid, a protein that builds up to toxic levels in the Alzheimer’s brain, is a lipid whose disposal by APOE is essential for maintaining brain health.”

She called it a two-pronged problem for women because hormones like estrogens are made from cholesterol – a lipid which must be ushered into cells so that estrogens can be made in the brain. Because E4 doesn’t transport lipids into cells as well as other APOE variants, this can lead to a reduction in cellular estrogen available to the brain, she added.

“Now that we can model this reduced response to estrogen in mice with two copies of E4, we can better understand why women E4 carriers don’t benefit cognitively from estrogen therapy and we can develop treatments that may specifically benefit those women,” she said.

The study was published  recently in the journal Neurobiology of Aging.

They discovered that two copies of E4 inhibited estradiol’s ability to enhance memory for the location and identity of objects, and to improve neuron communication by promoting connectors called “dendritic spines.” In contrast, estradiol improved memory and increased the density of dendritic spines in the hippocampus of mice with one or two copies of E3.

Dendritic spines are knob-like structures that proliferate along dendrites, the “communication lines” on neurons. Neurons connect to each other at dendritic spines, so a loss of dendritic spines reduces communication in the brain. In an Alzheimer’s brain, spines in the hippocampus disappear first, making it an early indication of cognitive decline.

Another take-home from the study, Frick said, is that for women considering estrogen therapy, knowing their APOE variant composition could help them decide whether to take estrogen therapy for memory protection. Many women are reluctant to take hormone therapy, whether it be for memory protection or to ease bothersome menopausal symptoms, because estrogen could increase their risk of breast or uterine cancer.

That concern is what led Frick to develop an estrogen compound that would help boost memory without harmful side effects. With colleagues from Concordia University Wisconsin and Marquette University, she formed the startup Estrigenix Therapeutics Inc. with the aim of commercializing compounds that provide the benefits of estrogens without risky side effects.

Meanwhile, Frick’s lab recently landed a new $300,000 grant from the Alzheimer’s Association to take the work a step further. Using their Alzheimer’s mouse model, the researchers will compare effects on memory, dendritic spines and Alzheimer’s pathology of long-term oral treatment with estradiol and two novel estrogen compounds in animals that have the APOE variants E3/E4 and E4/E4.

These novel compounds target another part needed to solve the Alzheimer’s puzzle in women – estrogen receptors.

Estrogens influence cell function by binding to estrogen receptors – including receptors alpha and beta – inside cells. The alpha receptor, but not the beta receptor, is associated with the cancer-causing effects of estrogen therapy, so Frick’s team at Estrigenix has focused on creating highly selective compounds to target the beta receptor.

“We don’t know why that is, but it may hold some clues as to why those animals aren’t responsive to estradiol,” she said. “So, we’ll be testing estradiol, which binds to both alpha and beta receptors, and then compare those effects to compounds that selectively activate just alpha or just beta, including one of Estrigenix’s compounds. These data could give us a sense of which treatments might benefit women of different gene variants.”

Unlike the recently published study, animals in the new research will be treated orally for two months, instead of receiving estradiol infusions directly to the brain. Because the new study will use a treatment method that is similar to the one used in people, this work could help makes new treatments available for women more quickly, Frick said.