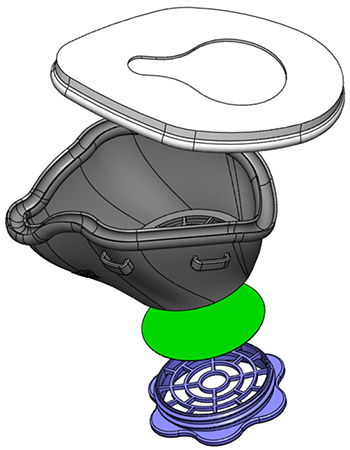 The “day 4” mask design consists of a silicone gasket that goes up against the user’s face (top), a thermoformed body, the filter and the cap. 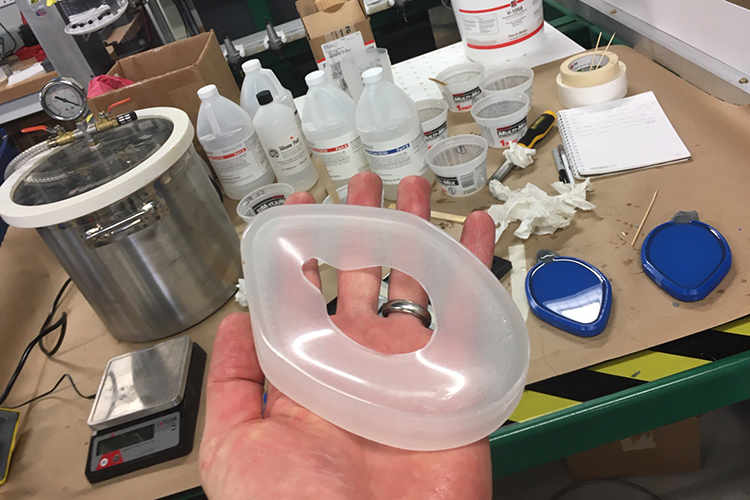 Jansson’s team produced a “pillowy” gasket, experimenting with various hard and soft silicone (in jugs at rear) and a vacuum chamber (at left) to mix the silicone. The blue pieces are 3D-printed molds. 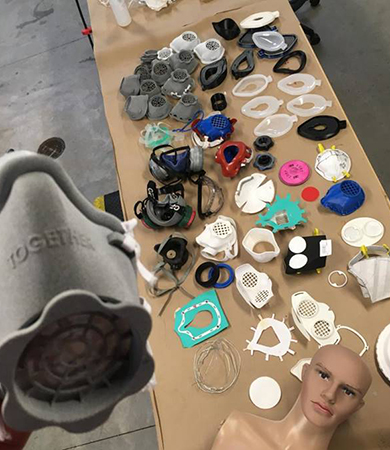 These pieces represent what Jansson calls “iterations,” a collection of first ideas, many of which didn’t make the cut. Not shown are samples from the filtration material, everything from coffee filters to medical-grade fabric to furnace filters cut into discs. 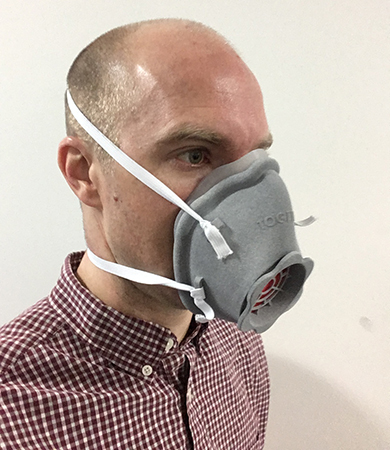 Jansson shows how their prototype mask is worn. The team already has obtained feedback on the material of the gasket, mask shape, and its straps, filter, the means of adjusting the fit. 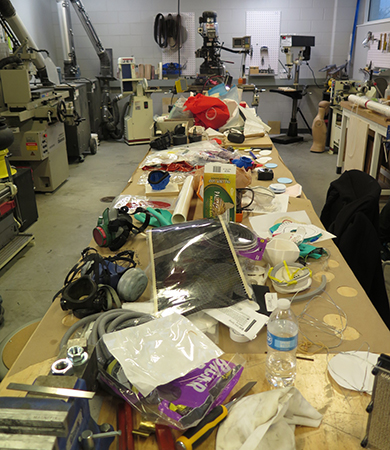 “A lot of people see a final prototype and think – huh, that’s so simple,” Jansson said. “What people don’t see are the dozens of materials, failures, molds/tools and the evolution it takes. We’d clean up this long table in the Prototyping Center each day, and by the next day, it would look like this again.” 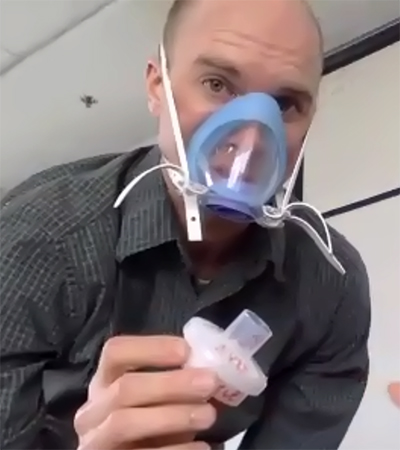 The RoddyMedical TogetherMask has a replaceable FDA-approved filter and conforms to differently shaped faces. Its see-through front allows patients to see their caregivers' smiles.

Jansson, director of the Prototyping Center at UWM’s Innovation Campus, and Roddy, a UWM doctoral student in nursing, felt a sense of déjà vu as they worked on the initiative, dubbed MaskForce. Just two years before they had launched a medical device startup, RoddyMedical LLC, after they worked together to create a product that organizes the tangle of medical tubing connected to hospital patients.

“There is a lot of experience that we were able to bring to the table,” said Roddy.

MaskForce launched in early March by Waukesha-based Husco International Inc. and included more than 25 organizations in business, academia and health care who join forces to design, test and make the life-saving masks. It was Jansson and his cohort of colleagues who created, in only 60 hours, a functional prototype that served as MaskForce’s starting point.

Lindsey Roddy and husband John Roddy, a physician and fellow at the Medical College of Wisconsin, were testing filtration material early in the process. Four weeks out, the coalition has a prototype approved by medical professionals, a feat that usually takes up to a year.

“That collaboration was like nothing I’ve ever experienced before,” said Jansson of that first week. “There were hundreds of people working long, hard hours because we all know someone who needed those masks.”

Pat Masterson, vice president of corporate manufacturing at Husco, formed MaskForce after the state passed legislation allowing health care workers to use industrial N95 masks. Worried that supply still would not meet the demand, he asked members for a redesign that would make them reusable.

With so many partners involved, Jansson said, the larger group broke into teams, each consulting with medical experts on parallel paths with the goal of integrating all the experts’ preferred features. Professionals from Froedtert and the Medical College of Wisconsin, Children’s Hospital of Wisconsin and the Milwaukee County Emergency Operations Center provided the feedback.

Daily check-ins led to rounds of modifications every 24 hours. “We moved in a collaborative kind of ‘technical competition,’” he said. Along the way, MaskForce had support from hospital CEOs, clinicians, fire departments, materials suppliers, engineering firms, injection molders, designers and Fortune 500 companies.

Jansson and Roddy said it was their experience in UWM’s entrepreneurial community in the last two years that gave them the skills to move from a design to a viable prototype at such warp speed.

They formed RoddyMedical LLC in 2018 after enrolling in a unique entrepreneur-training program at UWM supported by the National Science Foundation. Called I-Corps, the program teaches academic researchers how to convert their discoveries into products and startups.
I-Corps training gave the pair the know-how to obtain potential customers’ exact wish list for a particular product, a process called “customer discovery.”

“Underlying the I-Corps approach is the ability to pivot quickly and adapt to new information,” said Brian Thompson, president of the UWM Research Foundation, which administers the program in Wisconsin. “These skills would seem more important than ever on the MaskForce project and addressing the larger challenges around COVID-19.”

The N95 masks are respirators that fit tightly to the user’s face and filter invisible airborne particles.

Like other attempts by maker communities across the U.S. to produce reusable masks, MaskForce’s progress was slowed by filtration obstacles. Governmental restrictions limit the choices of materials that can be used for filtering on an N95 mask. Jansson’s design team worked with companies like Briggs & Stratton and Pentair to test filtration materials that would put the mask’s performance close to meeting 3M’s benchmark of blocking 95% of particles.

As Husco turned its attention to manufacturing the prototype mask parts, Roddy and Jansson started working in parallel on their own mask project with the goal of further improving the design. The result, the RoddyMedical TogetherMask, is biocompatible with skin, conforms to differently shaped faces and filters 99.99% of bacteria and viruses.

The TogetherMask also can be disassembled and cleaned using multiple methods, and it’s clear, “so you can see a face and a smile,” Roddy said. Already it is being used by a local hospital and it has become a new product offered by the startup.

“This has been the most incredible and humbling project I have ever worked on in my career, and I think most others working on this would say the same thing,” he said. “There are hundreds of people working long, hard hours because we all know someone who needs these.”

Below is a list of major contributors to the MaskForce effort:

Froedtert & the Medical College of Wisconsin