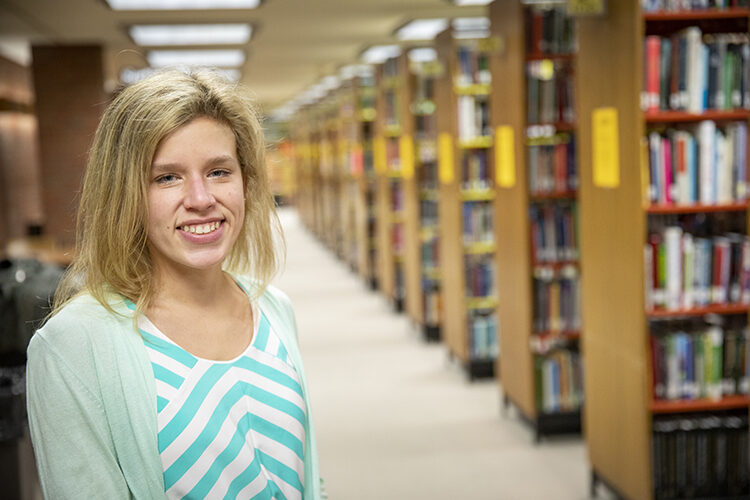 Since the pandemic began, the role librarians are expected to play has expanded, said Abigail Phillips, assistant professor of information studies at UWM. (UWM Photo/Troye Fox)

As centers of their communities, libraries and the people who run them are increasingly called upon to take on new ways to support the public. The new expectations put on libraries during the pandemic increased the burnout rate among librarians, a profession that already suffers from high rates of mental illness, a UWM scholar’s research finds.

“They are being asked to do more and more and put themselves in a kind of an unsafe space, like they have patrons that come in refuse to wear masks,” said Abigail Phillips, an assistant professor of information studies at UWM. “They don’t feel that administrators or supervisors really care about their needs.”

Phillips, who was a librarian in Georgia for seven years, studies the mental health of librarians across the country and look for ways to better support them. She conducts most of her research through interviews and focus groups.

Since the pandemic began, the role librarians are expected to play has expanded, she said.

Librarians were treated like frontline workers without being labeled as such, Phillips said. They were expected to be at work a month after everything shut down in 2020. During the pandemic, libraries have provided masks and COVID-19 tests as well as books and enrichment activities.

“Libraries are a form of community support,” Phillips said. “They are meant to be a place where people can go for leisure, education, entertainment or recreation. It gives them a lot of services they might not otherwise get, like Internet access.”

Some libraries, especially in urban areas, are bringing social workers onto their staffs to better serve community needs in a way librarians are not trained to, Phillips said.

In 2020, almost 19% of Americans dealt with mental health issues, according to the National Alliance on Mental Health. Data suggests the problem has worsened over the next two years, and there are not enough solutions. Over 40% of all American adults who seek mental health treatment were unable to receive it, according to a 2022 National Council of Mental Wellbeing survey.

Nearly 1 in 4 Americans are affected by mental health, yet there is still a stigma surrounding the topic, Phillips said.

However, mental health might affect a larger proportion of librarians. More than half of librarians report struggling with their mental health, according to a College and Research Library study. The additional responsibilities given to librarians has made the problem worse, Phillips said.

She is particularly interested in this national trend because she believes mental health is not talked about, especially within the library community. She studies ways to support librarians because she knows firsthand how mentally draining the job can be.

“When I was a librarian, I wasn’t supported by my administration or by HR, and it was hard because you’re kind of out there alone and you’re struggling with so much,” Phillips said. “It’s just not talked about — mental health or mental illnesses, in particular.”

Increased funding for libraries and empathy are the best ways to support librarians, she said.

“It sounds really simple, but try to treat the people behind the desk with compassion and empathy and understand that they have a lot of things going on in their lives,” Phillips said.