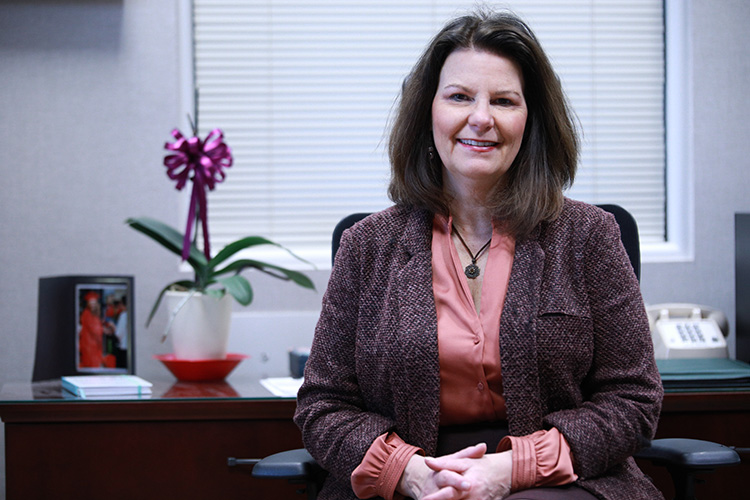 Victoria Brahm, a UWM nursing graduate, says running the Tomah VA Medical Center is her way of giving back. "The VA was a great way to serve veterans and still have a quality of life with my daughter and my family." (Department of Veterans Affairs)

How challenging is it to run a major medical center under a glaring media spotlight?

“On a scale of one to 10, about a 10,” said Victoria Brahm, who took over as medical director of Wisconsin’s Tomah VA Medical Center in January 2017. Brahm, who earned her master’s in nursing from UWM in 2001, had served as acting director since October 2015, when both the director and chief of staff left amid a cloud of criticism and an investigation into the over-prescription of opioids and other pain relievers.

“When I came, it was a troubled facility, and there was a lack of leadership because of what had happened previously with opioid issues,” said Brahm. She was faced, she said, with not only restoring the reputation of the center, but also rebuilding trust with the staff, veterans and the community.

Under her leadership, the Tomah center’s Department of Veterans Affairs quality rankings have risen from 77th out of 129 VA facilities nationally to No. 35 “and we’re on the cusp of jumping a bunch more.” Surveys of both staff and veterans also show strong improvement in climate, satisfaction and trust. Brahm has introduced a new focus on whole health to help veterans and their families find alternative ways to manage pain, stress and mental health issues. One result has been a dramatic drop in the use of opioids and other prescription pain relievers, while patient satisfaction has increased, according to surveys.

“I’m really proud of how fast and how quickly this VA has turned around,” Brahm said, “largely because of so many professional people who are only here for the mission of serving veterans.”

As director, Brahm is responsible for a 246-bed hospital that sits on a 175-acre main campus, plus four outpatient clinics that serve thousands of veterans from 16 counties in Wisconsin and two in Minnesota. She handles an annual operating budget of around $162 million and a workforce of more than 1,200.

Her interest in serving veterans came from growing up in a military family – her father and six brothers were in the military. “Coming from a military family, I always wanted to serve, but I had a daughter and I couldn’t imagine leaving her. The VA was a great way to serve veterans and still have a quality of life with my daughter and my family.”

She credits UWM’s master’s degree program in nursing with helping her develop the skills that have served her well at Tomah. While working on her degree in nursing, she was able to also take courses in business and administration. At the time, she was also balancing family and work obligations. She and her husband have a blended family of five children. Her daughter Noelle, now 26, is a UWM graduate as well. At the time, Brahm was working full-time at Milwaukee’s Clement J. Zablocki VA Medical Center.

“UWM was extremely flexible. I had some great professors,” she said.

Hands-on projects also helped her develop administrative skills, she recalled. “One project was to develop a business plan for a women’s health clinic at the Milwaukee VA. We opened the clinic, and it’s a very functional clinic to this day.”

At Tomah, she has worked with center staff, the national VA and providers to evaluate how to best serve veterans in their area of Wisconsin.

“We decided that our mission was to focus on expanding mental health services, meeting the needs of the homeless veterans, whole health initiatives, primary and long-term care,” she said.

The center expanded approaches to treating pain and traumatic stress, opening a new program called Pain University, which uses the university model to provide pain education and therapies to manage chronic pain and reduce the need for medications.

“We’re training providers in “all sorts of nontraditional therapies to relieve pain and stress,” said Brahm.

Tomah was one of only 18 VA centers in the country chosen to be leaders in the implementation of “whole health” programming.  Tomah VA received a $4.2 million grant last year to expand the program, using health coaches to work with veterans and their primary care providers to find treatments that work for them. This programming offers veterans a range of options including yoga, anger management, mindfulness, equine therapy, “battlefield acupuncture” and healing touch, among others. The center also works with couples, providing family therapy.

The center is in the process of collecting data on all of these therapies to provide outcome measures, she said.

One of Brahm’s goals in changing the culture at the Tomah VA was to work closely with staff, to keep her door open and to be visible. So, she has an apartment in Tomah, and during the week is on the VA grounds long hours every day. Her family home is in Lisbon, where her husband, Douglas, is the fire chief.

There is more work to do, but she is proud, she said, of the change in culture and response and support of the staff.

“We can’t rest on our laurels, but even if it’s hard some days, we are making a difference here.”