The secrets of success for an entrepreneur really aren’t all that secret, according to four UWM alums and entrepreneurs who spoke at the Made in MKE: The Founders’ Stories panel during the 2020 Milwaukee Engineering Research Conference: hard work and problem solving.

The annual two-day conference, cohosted by the UWM College of Engineering & Applied Science and the Lubar Entrepreneurship Center, brings together federal agencies, industry and academia for technical discussions around the nation’s research enterprise.

Made in MKE panelists Ali Bakhshinejad, Carrie Bristoll-Groll, Ben Caya and Jesse DePinto share a few things in common: a passion for innovation, a knack for creative solutions, a UWM degree and — for three of them — an office dog.

Returning to their alma mater, the entrepreneurs spoke about how engineering led them to launch their own startup companies that engage with issues in the community.

After graduating from UWM in 2018 with a doctorate in mechanical engineering, Bakhshinejad founded VasoGnosis, a startup software service that provides AI-powered diagnostics and surgical planning for cerebrovascular disease. Based off his doctoral dissertation on brain aneurysms, the software can detect abnormalities and help guide treatment.

“If you look at any startup, they all go through a lot of trials,” said Bakhshinejad, who is president and CEO of VasoGnosis. “We are in constant search of what will work.”

WisconsinInno named VasoGnosis one of 20 Wisconsin Startups to Watch in 2020 while Bakhshinejad was one of 50 entrepreneurs statewide to make the final round in the 2019 Wisconsin Govenor’s Business Plan Contest.

Bristoll-Groll was a mother of three when she graduated from UWM with a bachelor’s degree in civil engineering in 1994. She attributed her academic success to the university’s flexibility and inclusivity. “I felt like UWM was a place that was open to whatever your situation was,” Bristoll-Groll said.

In 2002, she became the founder, principal civil engineer and CEO of Stormwater Solutions Engineering in Milwaukee and Brookfield. The company specializes in improving natural and built environments through sustainable engineering in response to local issues in flood prevention, pollution and urban planning.

Now, her office employs five UWM graduates and one current engineering student, who work alongside Bristoll-Groll’s stress-relieving German shepherd dog, Ava. Engineers at Stormwater Solutions have designed green infrastructure projects across the city including the production of a new patent-pending stormwater product, StormGUARDen.

“If there’s something that you’re passionate about, you know you can be the best at and there’s a chance you can make money, there’s a good place you can try and start a business,” Bristoll-Groll said.

As an undergraduate in 2010, Caya kicked off his entrepreneurial career after finding three beer kegs in a basement and transforming them into a home brewing business.

After graduating from UWM with a bachelor’s degree in mechanical engineering, Caya launched Spike Brewing, which has since metamorphized into a commercial-grade brewery equipment company with customers in more than 20 countries.

“There are a lot of long hours,” Caya said. “Being an entrepreneur is kind of a buzzword, but behind the scenes it’s working 80-hour weeks. That’s the mindset you have to have going in.”

DePinto graduated from UWM in 2013 with a bachelor’s degree in mechanical engineering and went on to become the co-founder and chief growth officer of Frontdesk.

The company is a blend between Airbnb and Marriott where guests can book overnight to year-long stays in urban apartment communities across 25 cities in 14 states. He refers to Frontdesk as a “next generation hospitality brand” that hosts 6,000 guests a month and has generated $12 million revenue since its founding in 2017.

“The entrepreneurial journey is something to be persistent with,” DePinto said. “It took cycling through about five ideas to realize it’s very rare to have it figured out right away.” 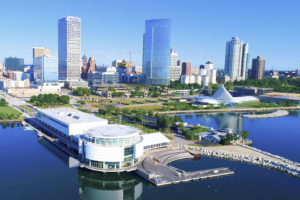 The company has been receiving a surge of attention in preparation for Milwaukee’s hosting of the Democratic National Convention this summer.

Attributing his entrepreneurial success to support from UWM’s Student Startup Competition, which gives students an opportunity to develop and launch business ideas, DePinto said, “It’s been an incredibly gratifying journey coming out of engineering.”

The panel was followed by a reception in the Lubar Entrepreneurship Center, where guests and speakers could connect with others in the engineering community.

Steve Schmitz is a UWM alumnus and a senior engineer with Navatek, which is establishing research partnerships through the College of Engineering & Applied Science in 2021.

“The way the university and the city have been fostering entrepreneurship has been exciting, especially for the younger generations.”

UWM business management student Mathew Herman attended the event hoping to make connections with local entrepreneurs as he prepares for a future in upper-level management or business ownership.

“It’s nice to be around people who know more than you do,” Herman said. “They’re people who have done the things that you’re aspiring to do.”