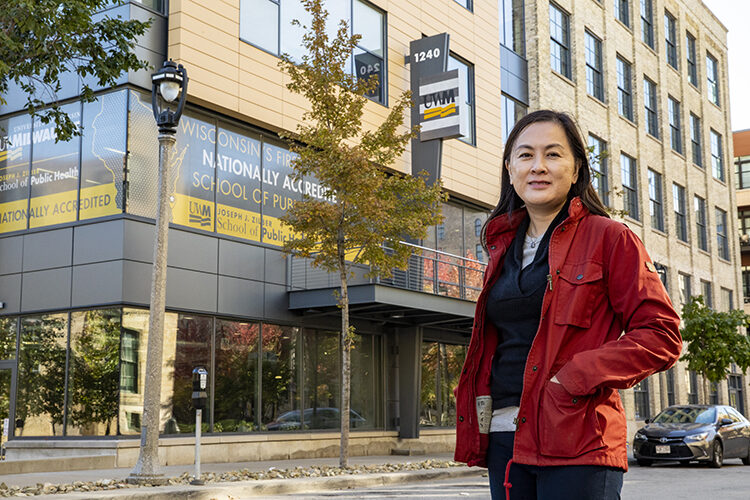 The Hispanic community and other groups overrepresented among frontline workers suffered disproportionately during the pandemic, says Phoenix Do. “It was because they were doing their jobs.” (UWM Photo/Troye Fox)

In the early months of the coronavirus pandemic, statistics showed little evidence of a disproportionate number of deaths from COVID-19 among Hispanics compared to whites. That’s because the overall death rates were highest among people over age 69, a segment in which whites predominated.

As more data became available, Phoenix Do in UWM’s Zilber School of Public Health and Reanne Frank at Ohio State University wondered why the higher death rate among Hispanics was missed earlier. So they took a closer comparative look at COVID-19 cases and deaths by age groups, something no one else had done.

They found that working-age Hispanics suffered far greater infection and death rates than whites in the same age group, Do said. In fact, she said, whites were the most underrepresented in case burden among the working-age population.

‘They were doing their jobs’

Given that Hispanics are overrepresented in frontline and essential jobs, Do and Frank’s study supports the explanation that exposure to COVID-19 among Latinos happened at work.

“This study provides essential evidence explaining why the Hispanic community, along with other groups overrepresented among frontline workers, took such a heavy hit from this pandemic,” said Do, UWM associate professor of public health policy & administration. “It was because they were doing their jobs.”

The study was published in the journal Demographic Research.

“There was no evidence before this paper that really demonstrated that the excess cases were precisely in these working-age groups,” said Frank, professor of sociology at OSU and coauthor on the paper.

Using restricted COVID-19 case data from the CDC and public datasets, the researchers examined other possible reasons that would account for the disparity in deaths. Those theories included that Hispanics have a higher proportion of preexisting health conditions, unequal health care access or quality, and multigenerational households.

Among reported cases of COVID-19 in the working age population, their data provided no evidence that Hispanics had a higher prevalence of pre-existing health conditions, compared to whites, said Do.

And, among people older than 59 who were infected, Hispanics had lower mortality than whites.

“If intergenerational household structure played a major role, we would expect to see the largest excess cases and excess deaths among the oldest Hispanics,” Do said. “But what we saw was the opposite.”

Need to do more

The COVID-19 pandemic has showed that the federal government needed to do more to enforce workplace safety, she added.

In 2020, the Occupational Safety and Health Administration pursued only a fraction of workplace complaints related to COVID-19 workplace safety violations.

Employers should have to provide safety measures, such as ensuring social distancing, mask-wearing and accessible testing protocols, Do said. Key to this, she added, is providing paid sick time without negative repercussions, not only for sick employees but also for workers who have to care for sick family members.