Aaron Arendt never thought he would be spending his spring break sorting Mardi Gras beads when he signed up for the alternative spring break program to New Orleans.

“It’s service work that you could only do in New Orleans,” said Arendt, a junior in the Honors College at UWM.

Arendt and 19 other students from the Honors College went down for a week to help struggling communities in New Orleans.

Thousands of Mardi Gras beads used to jam up the sewers and pipes of New Orleans, but now nonprofits gather, sort and sell the discarded trinkets to help keep the city clean after the festival. 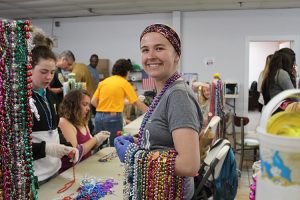 View Gallery
Honors College students give back with service

“It was the most fun day of service because it got competitive for me,” said Arendt. “We would dump big piles of beads and then sort them.”

Benjamin Schneider, senior lecturer in the Honors College, and Peter Sands, director of the Honors College, were the chaperones on the trip. This was the second year for the alternative spring break, with plans to make it an annual option for honors students.

“When talk of this trip to New Orleans began, I knew it would be perfect for me,” said Mariah Schaller, one of the Honors students on the trip. “Not only was I excited to meet other honors students, but I was also grateful for the chance to serve a community as deserving as New Orleans.”

The idea for a service trip to New Orleans came from Schneider and Sands. They wanted to help out some struggling communities and while also sharing their passion for New Orleans with their students.

“I have been drawn to New Orleans by the energy of the community, its music and culture, along with its many troubles, since I first visited over 30 years ago,”said Schneider.

The weeklong trip included three and a half days of service, with the rest of the time devoted to sightseeing and experiencing the unique pleasures of New Orleans. The service portion of the trip was organized through the nonprofit HandsOn, which places visiting volunteers with places in New Orleans that needs help.

“I have to say that watching them roll up their sleeves and get to work on our projects really makes me think about how I can live up to their energy and example,” Sands said.

The first two days of the trip were spent at the Sojourner Truth Neighborhood Center, where the students built tables, landscaped around the parking lot and power washed the building.

The community center also needed someone to paint new parking lines. The elderly in the community would sometimes crash into each other’s cars or park crooked when the lines weren’t painted straight.

“The first day we worked for Sojourner Truth Neighborhood Center was probably the most rewarding to me,” said Schaller. “The woman in charge of the center was so excited about the work we were doing — it was infectious.”

The third day of service was spent clearing out vacant lots that had become unofficial garbage pits for the neighborhoods. The students removed more than 50 tires along with heaping piles of garbage ranging from plastic cups to snack wrappers to metal cans.

“These sad, overgrown lots were filled with garbage, and we cleaned it all out,” Gauthier said, “and possibly, in the future, these lots could be a space where a new house could be built.”

The service aspect of the spring break trip fostered bonding among the students.

“One night, as a group we went to a jazz festival that was happening in the central business district where there were food vendors and music,” said Brianna Schubert, another student on the trip.

While Schneider and Sands knew one of their goals for the trip was to build community within the Honors College, they were surprised with the result.

“There is something about doing service work together or working towards a common goal that brings people together that other spring break trips can’t,” Arendt said.

After their work was done, the students explored New Orleans. Some went to jazz clubs at night; others took a ghost tour. One of the hotspots every night was Café du Monde for beignets.

“I had a lot of beignets in the week we were there. Let’s just say it was above 10 beignets,” Schubert said. “I also got to eat some of my favorites, like gumbo and jambalaya, and I was able to try new foods, like the po’ boy and dirty rice.”

Every day the students gathered for meals to talk about their day and try some local cuisine. One of the highlights, besides the infamous beignets, was a crawfish boil.

“Myself, I had about 20, I would say, because you don’t get that much meat off of one when you eat them,” Arendt said.

Students hope to make the trip an ongoing experience. Arendt, Gauthier, Schaller and Schubert loved their time in New Orleans so much they created a student organization called the Honors College Alternative Spring Break Club.

“It’s a student organization dedicated to service within the Honors College,” Gauthier said.

This fall, the organization members, Sands and Schneider will be going down to New Orleans for the National Collegiate Honors Council to give a presentation about their trip.

The organizers have visions of getting grant funding to allow more students to attend the alternative spring break trip next year. They even have hopes of creating a smaller, more local fall break service trip in the next year or two.

“The idea is that hopefully, in the long term, we will be able to build up a base of more trips and more opportunities with people who want to do exactly what we want to do,” Gauthier said.