When her instructor said UWM’s Honors College was planning a service trip, Emma Cowen, a sophomore majoring in Spanish and global studies, leapt at the opportunity.

“I didn’t care where we were going. I just knew I wanted to go,” she said.

She was just one of 15 Honors College students who spent six days in New Orleans during UWM’s spring break to do community service. Called the alternative spring break, the trip was organized by Benjamin Schneider, an Honors College senior lecturer, and Peter Sands, director the Honors College and an associate professor of English. 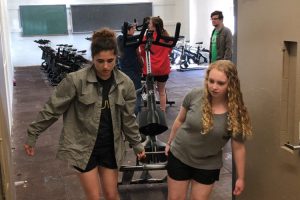 “We thought we could attract students to do something different for spring break and give back to a community that has need,” Schneider said.

They partnered with HandsOn New Orleans, an organization that creates and manages service projects and connects volunteers to service opportunities.

On the first service day, the UWM group travelled to the Lower Ninth Ward, an area that was devastated by Hurricane Katrina in 2005. Only about 37 percent of households returned to the area after the hurricane. There aren’t any grocery stores or supermarkets in the neighborhood.

Sands, Schneider and the students worked on a community garden, where they built a fence and cleared overgrown vegetation from a nearby vacant lot.

“We actually got to see the impact that the work made,” Cowen said. “We met and talked to people who directly benefited from the work we were doing.”

On the following two days, the group went to New Orleans East, where they worked to refurbish and paint a charter school’s fitness room.

In addition to serving the community, the students took walking tours of iconic New Orleans neighborhoods such as Treme, sampled foods like beignets and visited the city’s historic Saint Louis Cemetery to see the graves of notable people including Robert Brown Elliott, who was one of the first African-Americans to serve in the U.S. House of Representatives.

“We wanted the students to be able to connect what they do in the classroom, like studying literature and film, with the world and places like New Orleans that appear in those works,” Sands said.

He also said he wanted to show high-achieving students that classroom success is only one component, and that there are people working with organizations like HandsOn New Orleans who are using their college education to fill needs.

“We could see how special the work we were doing was to other people,” Cowen said. “It felt like we had power to make change in a community that isn’t getting a lot of attention.”