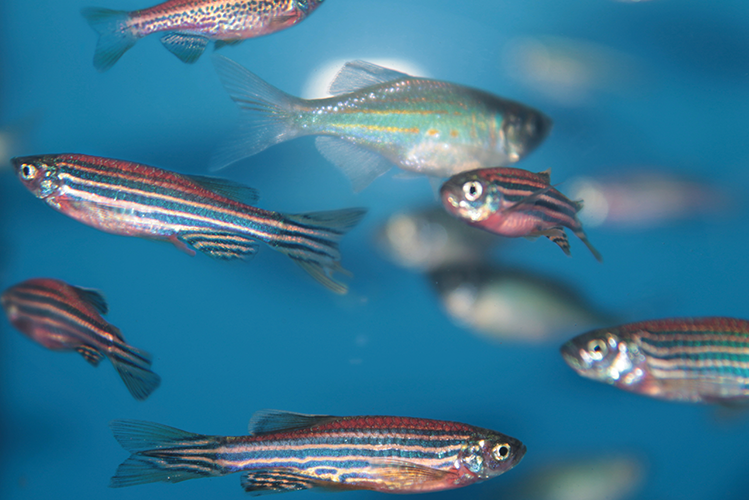 When a person’s optic nerve is damaged, by disease or injury, their eyesight goes with it. The nerve can’t be healed, and blindness is permanent.

That’s not the case for fish, which can regenerate their optic nerve in as little as 12 days and regain their eyesight about 80 days after an injury. Amphibians, like frogs and salamanders, also can reverse vision loss through regeneration.

Scientists are closing in on identifying the exact genetic components that fish and amphibians use to regenerate their optic nerve after injury. The work may one day provide new treatments for human eye diseases and prevent permanent vision loss.

On this episode of Curious Campus, UWM’s new podcast about science, discovery and culture, we talk with Ava Udvadia, UWM associate professor of biological sciences, and Fiona Watson, associate professor of biology at Washington and Lee University. The two scientists, one of whom studies regeneration in fish and the other who studies it in frogs, discuss their work in this conversation. To hear more, check out this week’s episode.

Would you explain the basics of vision for us and how that relates to the work you’re doing?

Now, in diseases such as glaucoma or other optic neuropathies, that conduit gets damaged. So you may still be collecting all the light that you need with your eyes, and your brain may still be working fine, but there’s no communication between them. The problem is, humans don’t have the capacity to regenerate nerves in our central nervous system the way fish and frogs do.

Watson: So during our development, our nerve cells grow and connect the eyes to the brain. This is a developmental program, initiated by a particular set of genes. Once they’ve established the connection, a whole other set of genes is used for maintaining that connection. So people have the same genes that fish and frogs use for regeneration, but we can’t reactivate the genes that are turned on during development once the optic nerve is built.

What controls the genetic programming necessary for regeneration in fish and frogs?

Udvadia: We can think of our genome as a recipe for making every part of us. A recipe contains the list of ingredients and the instructions of what to do with those ingredients. So think of the ingredients as our genes. The instructions of how to build the nerve, for example, would be analogous to the genes’ regulatory regions which control when to turn the genes on, how much to make, and where to make it in the body. We’re trying to understand how the method for development and the method for regeneration differ so we’re looking at the regulation of those genes.

Watson: Each of us has generated a list of “ingredients” – the genes that are active and not active during regeneration – for frogs and fish. And we’re now comparing the regulatory regions to see and timing the progression of regeneration in each animal.

Ava had worked out that for zebrafish. And I’ve been able to work out the entire timeline for 1-year-old frogs.Interestingly, the frog is able to regenerate its optic nerves throughout its entire life, but when it undergoes metamorphosis into its adult form, it loses its ability to regenerate all its other central nervous system neurons, like in the spinal cord. So it’s really special. It occupies a position that is sort of between mammals and fish when it comes to regeneration.

How can this work help save the eyesight of people?

Udvadia: Ultimately we hope to take what we learn from the fish and frogs and apply it to humans. And we think that we can. There are a lot of researchers trying to understand what’s going on with humans in response to this type of damage. We hope to be able to compare the injury response of humans to the response of fish and frogs. Then we can begin to get at how to tweak the response in humans.

Do you have any idea about how quickly we might be able to get to that point?

Watson: It’s hard to predict because science doesn’t progress in a linear fashion. So sometimes what can happen is that you have a series of discoveries, and then nothing for a while. And then there’s some breakthrough or new technology and, all of a sudden, there’s exponential growth in terms of the answers and the solutions that we can find.