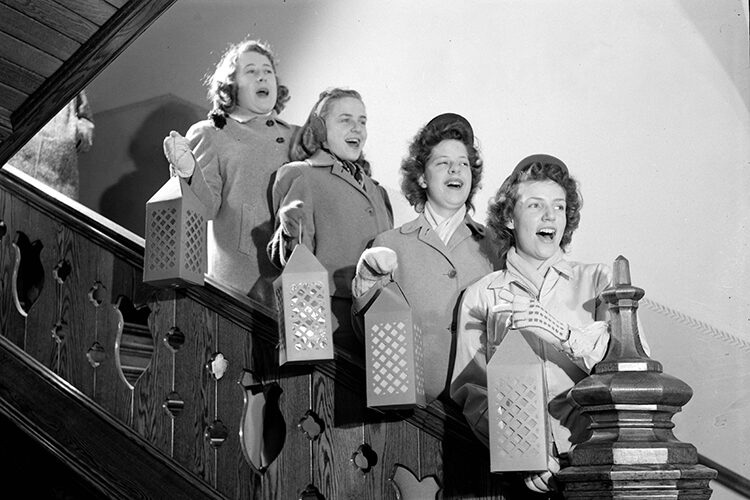 As the holiday song goes, “It’s the most wonderful time of the year.” Around the world, families and friends are gathering, whether virtually or in person, to exchange gifts, share stories or feast on sweets and home-cooked meals. The holidays also give people an opportunity to celebrate their cultural traditions and heritage. The pandemic changed some traditions, but others continued and are returning this year – sometimes in a different way.

On this episode of Curious Campus, UWM’s new podcast about science, discovery and culture, two folklore experts talk about the origins of some of our holiday traditions. We talk with Simon Bronner, dean of UWM’s College of General Studies, distinguished professor of social sciences and an internationally known expert in folklore. Joining Bronner is Meghan Murphy-Lee, a senior lecturer at UWM in the Department of Foreign Languages and Literature who has taught classes on Russian culture and Slavic folklore.

Bronner and Murphy-Lee answer some questions below. Grab a cup of cocoa, settle in around the fireplace and listen to the full show at WUWM.com or on your favorite podcast app.

Why are there so many holidays this time of year?

Bronner: Holidays are tied into seasonal cycle. With winter approaching, particularly in the northern climes, the days are dark and dreary, so holidays help compensate for that. It’s one of the functions besides celebrating certain events. A lot of people are inside because of the cold, so holidays provide an excuse to get together and that’s important. Some would argue with television and the media we don’t need that connection, but there’s also the argument that in a mobile society, holidays are also serving even more so as homecomings and ways to be with family.

How has social media changed the way we celebrate holidays?

Bronner: There might be a view that people will hold that it displaced traditions, but I believe it has enhanced them because people are learning about different traditions outside of their own families and neighborhoods. They’re asking questions about them and even participating in them. In addition, there is this sense of connection in that people of different backgrounds can share their traditions with others who are interested.

Murphy-Lee: In talking to Russian friends and colleagues, I’ve found they’ve been able to reconnect with the Russian New Year and friends there through social media. There’s a romantic comedy called ‘The Irony of Fate” that many Russians traditionally watch on New Year’s Eve and they can do that together now online. It has allowed Russians in the U.S. to celebrate with friends and family in Russia with a toast on Skype or video conferencing. They can relive traditions with their families.

What are some traditions unique to Wisconsin?

Bronner: When I came to Milwaukee, I was a little taken aback at what was announced as a Christmas tradition of eating raw beef. People used the term cannibal sandwiches or tiger meat. That was something I was not familiar with. I found out this wasn’t exactly cold cuts. This was something that tended to be done at Christmas time. Upon further research it does seem to come from the German roots of this area. There is something called mettwurst, which is a German kind of sausage with raw meat.

What is the origin of the holidays in Russia and the Slavic countries?

Murphy-Lee:  The Christmas holidays date back to a pagan holiday called Koliada which was around the winter solstice and the shortest day of the year. A lot of it involved feasting and singing. That transferred to the Christian holiday of Christmas and now to New Year’s. Children go door-to-door singing songs and collect treats.