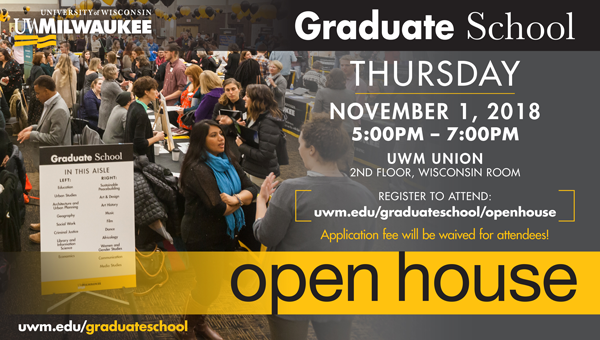 The UWM Graduate School will be holding an Open House on Thursday, November 1, 2018 from 5:00 – 7:00 pm. It will be held in the Wisconsin Room of the UWM Union. Application fee will be waived for attendees!

Register to attend at uwm.edu/graduateschool/openhouse.

Immigration and the City in the Trump Era

Book Sales and Signing After the Program

Amitav Ghosh, one of the most important novelists and essayists of our time, traces the entangled history of commodities, conflict and climate change in the Indian Ocean. Since the time of Vasco da Gama’s voyage, the Indian Ocean has been the theatre of intense imperial rivalries over commodities and resources. For centuries the main players in these conflicts were Western colonial powers, but lately the countries of the Indian Ocean rim have themselves become major consumers of resources, and thus, the principal drivers of anthropogenic climate change, an ongoing process that will have catastrophic consequences for the billions of people who live around the Indian Ocean. This lecture explores the continuities between the resource conflicts of the past and the future by focusing on two transformative imperial wars: the Anglo-Dutch spice wars of the 17th century and the 1st Opium War of 1840-42. It also poses a question: are the imperatives of empire and military supremacy among the major drivers of climate change?

Two additional Kirshenblatt-Gimblett lectures will take place at the Milwaukee Public Museum and the Milwaukee Art Museum, listed below.

Find the major that’s right for you!

Learn about UWM Majors, Minors, and Certificates to help you better choose your career path.

This event sponsored by the Career Planning Resource Center.

Please consider nominating top college students for special scholarship consideration. We award close to a million dollars annually and preference is given to nominated students. You may nominate by visiting www.DCinternships.org/Nominate.

Through this new scholarship program, TFAS will provide at least 40 full scholarships for top students to participate in our summer program. Students with a specific interest in the armed forces, the intelligence community, diplomacy and foreign affairs are especially encouraged to apply for a National Security Scholarship

Applications are now being accepted for Spring and Summer 2019 International Affairs Academic Internship Programs hosted by The Fund for American Studies (TFAS) in Washington, DC. All of our programs include guaranteed internships placements, academic credit from George Mason University, furnished housing in downtown Washington, as well as many opportunities for networking and professional development.

As part of the UWM’s Latinx Heritage Month, the UWM Department of Spanish and Portuguese is hosting ¡Saludos!

Join us for this Meet and Greet event on Tuesday, October 2nd in Curtin 739 to learn more about course offerings in Spanish and Portuguese, and scholarships, study abroad programs, and more.

Light refreshments will be served. 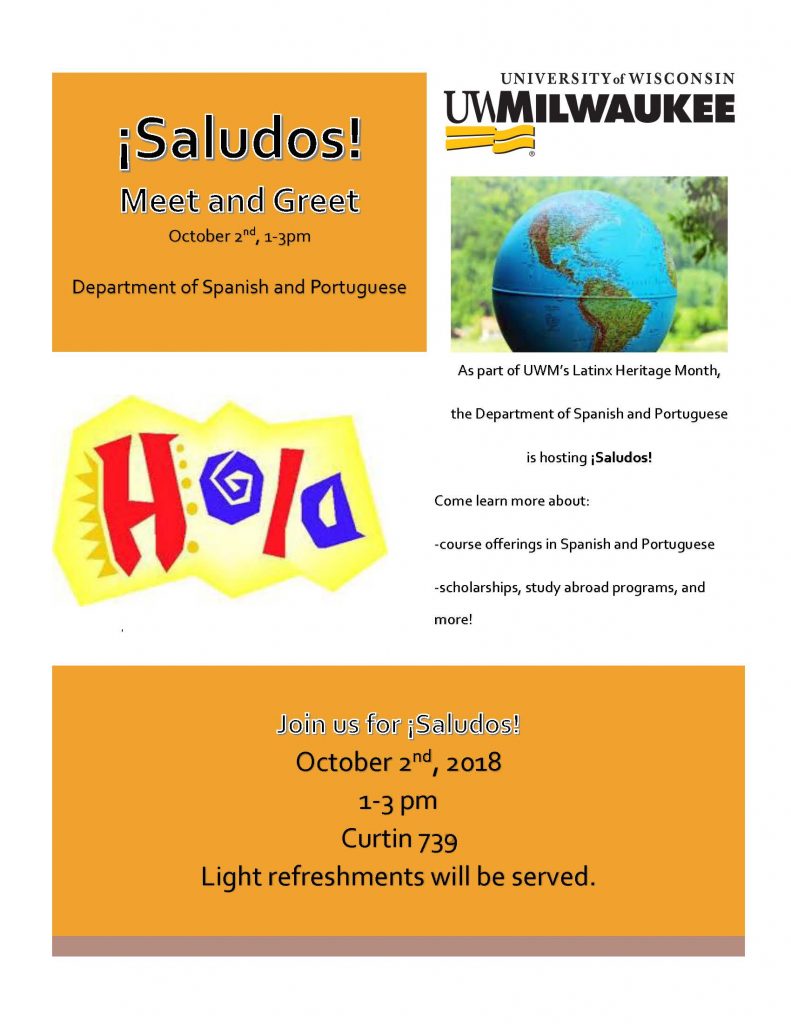 Do you have a passion for public service? Have you ever wondered what it takes to be a U.S. diplomat and represent the United States? Do you want to learn more about the steps you need to take to work on the forefront of diplomacy?

Melissa Martinez is the US State Department Diplomat in Residence for the Midwest. Martinez is a media and communications professional with over sixteen years of international and domestic experience in the U.S. diplomatic service. As a Public Diplomacy Officer, Melissa has spent five of her eight tours serving in a Public Affairs role. She most recently worked as the Diplomat in Residence for Southern California, Nevada, and Hawaii. Prior to that, Melissa served as the Deputy Press Attaché at the U.S. Embassy Mexico City, one of the largest U.S. diplomatic missions in the world, and led her team in crafting messages for one of the United States’ most important bilateral partnerships.

Join us on Thursday, October 4, 2018 at 10:00am–2:00pm in the UWM Student Union Wisconsin Room for the Fall 2018 Career Fair. Representatives from various employers will talk with students about future employment possibilities.

Meet the Diplomat in Residence: Melissa Martinez
1 2 Next ›