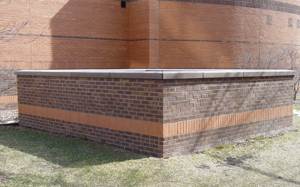 UWM operates a digital seismometer which is housed in a specially designed vault accessible from the basement of Lapham Hall (but not connected to the building). The instrument rest on a pillar of concrete that extends down 30 feet to help isolate urban noise from transient signals. Unfortunately the bedrock in this area is too deep (~200 ft) for the pillar to extend down to it so some urban noise is found in the signals. 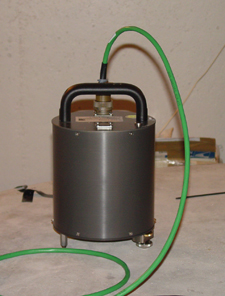 This is a picture of the Guralp 3-component digital seismometer (CMG-EDU-T) that we are currently running. This is a broadband instrument capable of recording frequencies ranging from 30 sec to 40 Hz. The digital seismomter is connected to a Dell PC that continuously records seismic data. The digitizer clock is is kept accurate with the help of a GPS sensor that is constantly feeding the current time. The instrument is set up to sample at both 1 sample per second and 40 samples per second. The reason for the different sampling rates involves the both the type of energy we are recording and the distance the earthquake is from our recording station. At 1 sample per second, we are looking for teleseismic events (greater than 200 km away) where the majority of the energy we will record is in the lower frequency range (1-30 seconds, 1-0.33 Hz). At 40 samples per second we are looking for higher frequency energy (0.1-1 sec, 10-1 Hz), that is prevelent with an earthquake that has occurred regionally (< 200 km; e.g. Indiana, Missouri, Kentucky, etc.). Wisconsin is located in a very stable area where few earthquakes occur so the data that we collect here is used by other scientists to better understand how earthquake waves travel though our part of the country.

Here is a little earthquake recording history here at UWM

The Geoscience Department of UW-Milwaukee has been operating a seismograph, or earthquake recording system, since 1972. It is currently located in a vault near, but not connected to, the new part of Lapham Hall on the main campus on the northeast side of Milwaukee. The analog system first came on-line on September 15, 1972 under the direction of Dr. David Willis in Sabin Hall of UW-Milwaukee. The seismograph in Sabin Hall was displayed on the first floor just up the stairs from the Downer Avenue entrance of Sabin, at Newport and Downer. The seismometers were in a noisy basement area under the big lecture hall, Room 85. The University power plant was next door from Sabin increasing the already relatively high background vibrations. In September of 1992 the seismograph was moved to Lapham Hall. The location in Lapham Hall is considerably quieter, especially during class change times which were a problem in Sabin with 200 students moving in and out of room 85. The digital system has been in operation since July of 1993. All of the analog recordings have been archived. Selected digital records are saved, as paper recordings and on digital tape.