Our very own Dr. Victoria McCoy is part of a collaborative study on the Extinct sea scorpions. 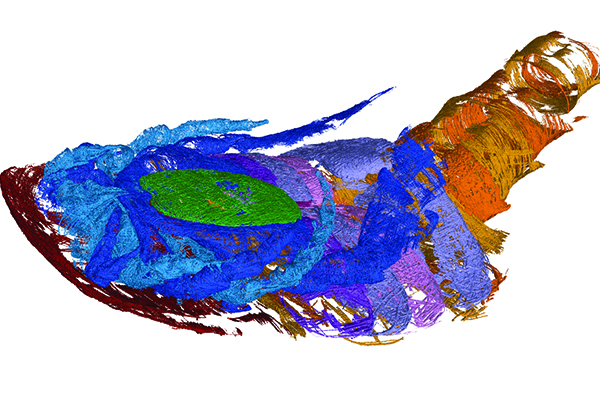 Through computed tomography (CT) imaging, WVU geologist James Lamsdell led a team that found evidence of air breathing in a 340 million-year-old sea scorpion, or eurypterid. This is one of the scans of the specimen. (WVU Photo/James Lamsdell)

Scientists have long debated the respiratory workings of sea scorpions, but a new discovery by a West Virginia University geologist concludes that these largely aquatic extinct arthropods breathed air on land. 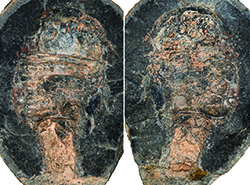 James Lamsdell dug into the curious case of a 340 million-year-old sea scorpion, or eurypterid, originally from France that had been preserved at a Glasgow, Scotland museum for the last 30 years.

An assistant professor of geology in the Eberly College of Arts and Sciences, Lamsdell had read about the “strange specimen” 25 years ago while conducting his doctoral studies. Existing research suggested it would occasionally go on land.

Yet nothing was known on whether it could breathe air. The closest living relative to the eurypterid is the horseshoe crab, which lays eggs on land but is unable to breathe above water.

These details puzzled Lamsdell through the years until he reached out to a colleague, Victoria McCoy at the University of Wisconsin-Milwaukee, and asked, “Do you have access to a CT scanner?” 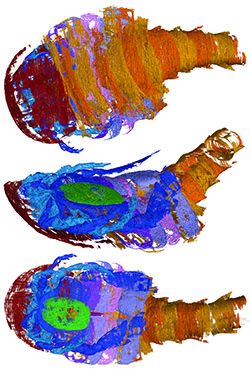 “We wondered if we could apply new technology to look further into what was preserved of this specimen,” said Lamsdell, who heads a paleobiology lab at WVU. “I like the science and detective work that goes into research. And this was a cold case where we knew there was potential evidence.”

Through computed tomography (CT) imaging, Lamsdell and his team found that evidence, which is published in Current Biology.

Researchers managed to study the respiratory organs of the three-dimensional eurypterid, leading to two findings that stood out to Lamsdell. First, he noticed that each gill on the sea scorpion was composed of a series of plates. But the back contained fewer plates than the front, prompting researchers to question how it could even breathe.

Then they zeroed in on pillars connecting the different plates of the gill, which are seen in modern scorpions and spiders, Lamsdell said. These pillars, or small beams of tissue, are called trabeculae.

“That props the gills apart so they don’t collapse when out of water,” Lamsdell explained. “It’s something that modern arachnids still have. Finding that was the final indication.

“The reason we think they were coming onto land was to move between pools of water. They could also lay eggs in more sheltered, safer environments and migrate back into the open water.” 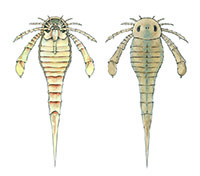 The discovery of air-breathing structures in the eurypterids indicate that terrestrial characteristics occurred in the arachnid stem lineage, the researchers wrote, suggesting that the ancestor of arachnids were semi-terrestrial.

In addition to Lamsdell and McCoy, co-authors include Opal Perron-Feller of Oberlin College and Melanie Hopkins of the American Museum of Natural History.

Now that Lamsdell has cracked the case living in the back of his head for 20-plus years, he believes there’s more to unearth from the fossil. He noted that the sea scorpion’s back legs expand into a paddle shape, which he suspects would have been used to swim. The bases of their legs also had spikes that ground up food for them that they maneuvered into their mouths, Lamsdell added.

“One of the things that would be really cool to do is to flesh out this model and try to reconstruct exactly how the legs could move and how they were positioned,” Lamsdell said, “like reconstructing the fossil as a living animal.”