The first of the spring reruns, an episode from April of 2010.

“Pussy willow” is a name that refers specifically to a willow shrub called Salix discolor but is commonly applied to several small willow species (and few of us can actually tell them apart, anyway). It blooms early and copiously; the sleek, fuzzy, grey buds (an early stage of the male catkins) soon mature, producing pollen-bearing structures and attracting bunches of early spring pollinators. Especially mining bees (family Andrenidae), which are among the first flying pollinators of the year. 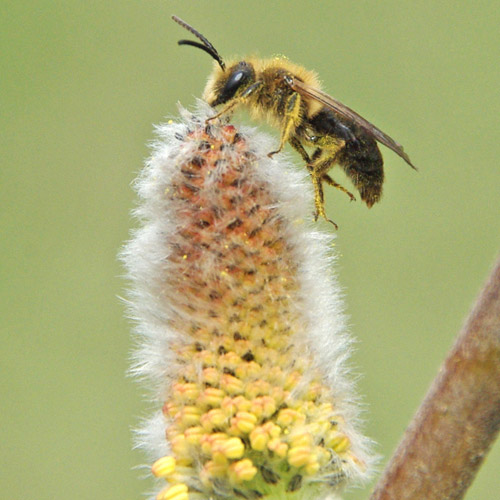 Ants, bees and wasps that live communally get most of the press, but there are more than 1,200 kinds of solitary bees in North America (500 are Andrenid bees) and a considerable number of solitary wasps. Mining bees are medium-sized (honey-bee-sized) bees, some of which may be seen when there is still snow around the edges. Some are bright-colored and others are drab, and many species are identified by the flowers they visit.

Mining bees are important native pollinators. The adults eat nectar (many are picky consumers of just a few plants) and they provide both nectar and pollen for their larvae. They are “buzz pollinators” who set up a vibration that causes a flower to release its pollen. Apples and other fruit trees, several species of orchids, and blueberry/huckleberry are among the plants they favor. Mining bees were “The Bee” in blueberry-growing areas until they were replaced by European honeybees, which in hindsight turns out to have been a flawed idea—with their hanging, bell-shaped flowers, members of the blueberry family are best served by the buzz-pollinators. Dramatic declines in honeybee populations in the past few years have demonstrated the downside of relying on a single pollinator for the majority our food crops. 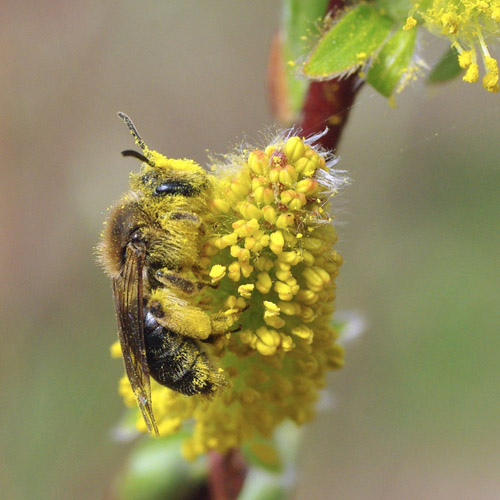 Like another spring bee, the bumblebee, mining bees have a densely hairy head, thorax, and legs, a defense against cold. Along with the fuzzy upholstery (her hairy body also comes in handy for collecting pollen), standard equipment includes pollen baskets/combs on the hind tarsi (back legs), smoky wings, a large head with a short, pointy tongue, and chewing-lapping mouthparts that are perfect for collecting pollen and nectar.

The modus operandi of female mining bees is to excavate a vertical tunnel a few inches deep in dry/well-drained ground, either level or sloped (they like road and ditch-cuts). The entrance is the diameter of a #2 pencil (remember those?) or slightly larger, and there’s often a tell-tale dirt pile at the hole’s entrance. Each tunnel has a number of side branches that end in chambers, and she waterproofs the chambers using a material she produces from a gland in her abdomen. The pollen and nectar she collects is divided among the chambers and is rolled into balls within each chamber. When Mom is satisfied that a chamber is adequately provisioned, she lays an egg on the food pile and the chamber is sealed. The larvae stay inside the chamber after hatching; they eat and pupate there, transforming into adults by fall, but not emerging from their tunnels until spring. They live for about a month after emerging. 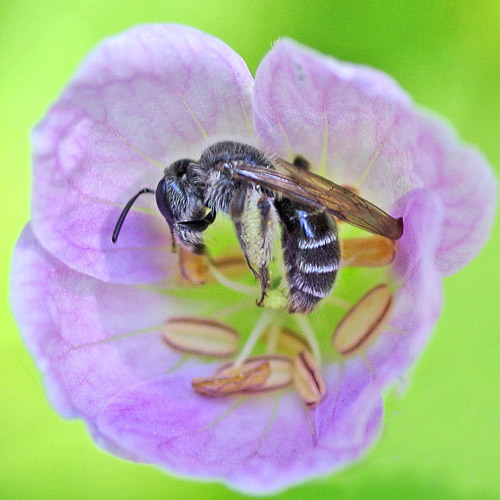 Female mining bees are not aggressive, you have to work pretty hard to get stung by one (it can be done, if you grab or step on one), and males can’t sting at all. Although solitary, mining bees will tolerate the nearby tunnels of other bees, but a group of tunnels is not a colony in the true sense of the word. Sometimes when grass develops bare patches, mining bee nesting activity is blamed; but, in fact, the area was already bare, and that’s why the mining bees picked it. The presence of mining bees hovering just above the ground in suitable nesting areas or in large mating displays can be unnerving to some people (but not BugFans). If you are one of those people, control can be achieved non-chemically simply by watering the lawn. At any rate, conspicuous displaying and foraging activity decrease after the eggs are laid. And they are pollinating your plants!

BugFan John asked the BugLady the other day what the difference is between bees, wasps, yellow jackets, and hornets. The BugLady has looked this up in the past – there are some technical, anatomical characteristics – but the details keep falling out of her head. So – a quick review to muddy the water a bit:

Besides that, there are a number of flies, like syrphid flies, that are wasp/bee mimics. Flies have two wings; bees, wasps, etc. have four.

Bugs in the News - The Videos