German Yellowjackets (GYJs) are European wasps that arrived in the northeastern U.S. in the early 1970’s and in Wisconsin a few years later. These world travelers are now found on four continents and several oceanic islands. Although the whole bee/wasp/hornet group is often labeled casually as “bees” (and GYJs have earned the nickname “garbage bee”), it’s easy to tell a honeybee from a wasp. Honeybees are hairy, black and tan insects about ½” long; the similarly-sized, GYJs are less hairy and are clearly marked by nature’s warning colors, yellow and black. Both species may nest in walls, but honeybees, which use their hives for years, do not nest underground. 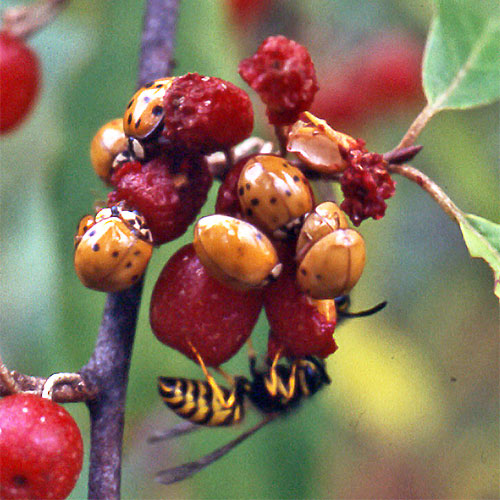 The nest is started in spring by a queen who has spent the winter sheltered in a crevice, leaf pile, or building. She chews plant material, mixes this cellulose with saliva, forms it into nest and nursery, and starts laying eggs. When the first workers emerge, they enlarge the nest, care for the larvae and queen, and forage for food. Adults eat insects and nectar and other sweet liquids, and workers bring pre-chewed protein to the larvae.

Their nests often seem plastered/sprayed onto a surface; these are not the classic hanging, football-shaped nests of the larger paper wasps. The GYJ nest below in the picture was collected from the front porch of an old building near Mayville, WI; Sherri is holding a typical hanging nest. They may nest underground (the BugLady’s parents had a sizable colony under the cement slabs of their front walk), but many nests are built in sheltered spots above ground or inside walls, and GYJs that nest in walls and attics may chew through your home’s inner walls into the house. Twenty years ago, almost all yellowjackets caught in sweet traps in urban areas were Germans, while those snagged in rural areas were native. But now, this urban, alien species is moving out into the sticks and displacing native species. 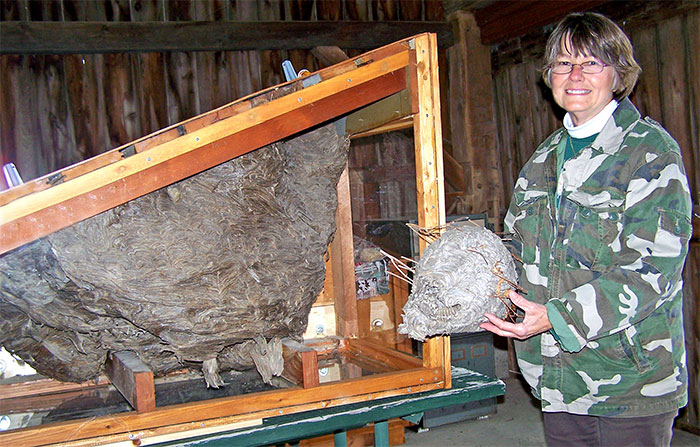 Wasp populations peak in late summer, when a very large nest may contain 15,000 inhabitants. A nest built in a protected spot can remain active into late fall, but the queen and workers will die before winter, leaving a new generation of fertile queens to restart the process. In Wisconsin, nests are not used for a second year (an old nest containing dead workers and larvae makes a great food source for raccoons and skunks). In subtropical climates like California, this adaptable, temperate-zone wasp is establishing colonies that last two or three years and grow to mind-boggling sizes (think pick-up truck size).

Wasps’ pluses as pollinators and as predators on unwanted insects are canceled by their painful (and, to some people, dangerous) stings and by their inconvenient choices for nest sites. Honeybees have barbed stingers and can only sting once—the act causes their death. For that reason, they are less aggressive away from their hives. Wasps can sting repeatedly, and they have a “hair trigger” both near their nests and away from them.

GYJs are the “gals” that have been making outdoor eating risky for the past 25 years. Close encounters can be minimized by checking picnic foods and drinks before each bite or sip, avoiding bright clothing and flowery perfumes, keeping garbage cans clean and closed, removing bruised and fallen fruit from the ground in orchards, and refraining from jumping around waving one’s hands hysterically at the sight of a yellow and black flying object. The BugLady knows one teacher who pours a small cup of beverage for the wasps when she takes her students outside to snack. The kids are instructed to tell the wasps calmly to go use their own cup.

Sugar-water traps will attract wasps, but these are more effective in early spring when the queens are foraging. In late summer and fall they barely dent the population. Removal of a large nest, either above or below ground, is not a job for amateurs; you can empty entire cans of wasp spray into a nest opening with little effect (other than annoying its occupants) because there often are multiple entrances. Call an exterminator.