Polistes is a widespread genus of wasps in the family Vespidae. They’re called paper wasps because they chew on bits of paper, wood, bark, etc, mix it with saliva, and form the resulting pulp into a nest typical of their species. Bugguide.net lists about two dozen kinds of Polistes in North America.

The names “wasp,” “hornet,” “yellowjacket” and “bee” are often applied indiscriminately (but not by BugFans). Wasps share their yellow and black/brown coloration with yellowjackets, but they are slim compared to the sturdy yellowjackets, have a sharp constriction at the “waist” and trail long legs below their bodies as they fly. There is a lot of variation in color and in facial and body markings within each species. Male Polistes have curly antennae, and most have yellow faces. 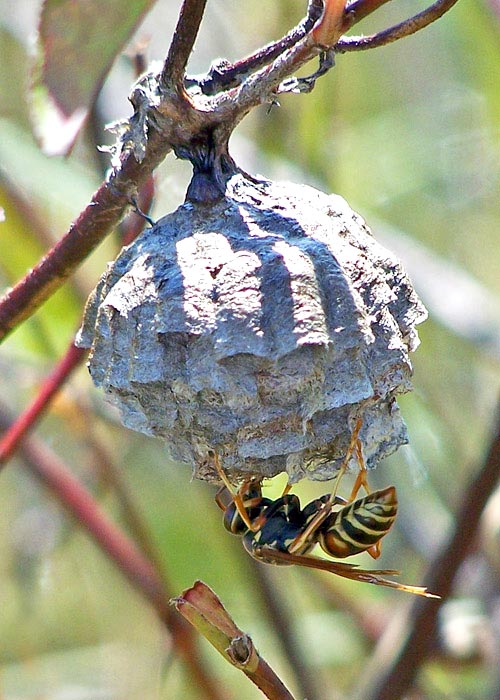 These are social wasps, but populations in the open-faced structures they build are usually measured in dozens rather than in hundreds, like the ground-nesting Yellowjackets and the bald-faced hornets that create hanging, football-shaped nests.

They start building an open-faced structure in spring and they apply an “anti-ant” chemical to the nest’s stem and base. The Polistes queen or foundress cares for the first eggs she lays, feeding the larvae daily in their hexagonal cells. These larvae will be sterile female workers that will forage for food, enlarge the nest, and care for their sisters. Several “sister foundresses” may collaborate to produce the original nest and care for the first brood, but the foundress-in-chief may drive them off when that brood matures. When it’s time to start laying the eggs of males and future queens, she will brook no competition. Unlike a honeybee queen, which becomes an inert, egg-laying machine, the paper wasp queen is up and about, interacting with workers and actively helping to defend her nest.

Eventually, a reproductive generation of males and females is produced, and when they mature and leave, the days of the nest are numbered. Polistes mate in late summer/early fall, and the royal females have extra fat cells and “antifreeze” that allow them to overwinter. The old queen, the males, and any remaining workers soon die. 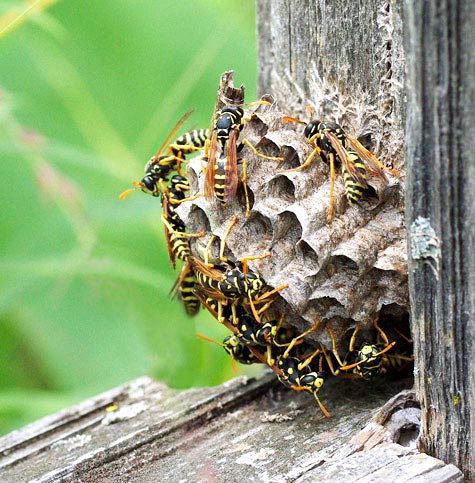 Adults eat nectar and other sweet liquids, but they hunt for caterpillars to feed the larvae, spreading pollen as they go. The caterpillars are well-chewed, and the liquid “bug juice” is swallowed by the foraging wasp (the wasp on the leaf with the pile of pulp is breaking down a sawfly larva). Bug juice is regurgitated for the youngest larvae, and larger bits are fed to older larvae. Paper wasps target many caterpillars that gardeners consider pests, and in a nod to their pest-control value, people put up nest boxes for them. They are eaten by foxes, a few rodents and some songbirds. Although birds and wasps have been known to tolerate each other, paper wasps can be a problem for cavity-nesting birds, including those that use man-made nest boxes.

Polistes wasps have developed behaviors that seem, well, intelligent. With all the wasps around, how do Polistes tell a sister from a stranger? First, each paper wasp carries the odor of the nest it grew up in, a hydrocarbon “signature” that comes from a combination of the essences given off by the plants that were masticated to build the nest and the specific chemicals that the foundress bestows on her eggs. Second, the pheromones (chemical scents) given off by a wasp match those of its nest-mates. Finally, like humans and chimps, Polistes wasps have the amazing ability to remember and recognize the faces of their companions, a skill that helps them know who’s who in the hierarchy of the colony.

The Golden or Northern Paper Wasp (Polistes fuscatus) is a common, native paper wasp that is found across the U.S. and into Canada, anywhere it can find wood to turn into nest material. According to bugguide.net, Polistes means “founder of a city” and fuscatus means “smoky-winged.” They’re just under an inch long, and many have yellow legs and bright cinnamon-colored markings on the abdomen.

Fertile “sister foundresses” that are allowed to stay in the nest must recognize a single queen as dominant. They are relegated to the role of worker, and any eggs they lay will be eaten by the foundress (if they stay, the co-founder’s ovaries eventually become vestigial). The foundress expresses her superiority through a language of threatening postures and by “darting” (dashing) at her offspring; actual fights are uncommon. Darts are more about “management” than they are about aggression (sort of a “Don’t make me come over there!” warning). Inactivity is the main sin that will earn a dart, but darts are also used to tell workers to switch to a different task. A slothful wasp takes a dart by the foundress more seriously than to one by a fellow worker. The foundress may communicate with developing larvae by standing near the egg cells and vibrating—sending messages through the substrate.

Enter the European Paper Wasp (Polistes dominula) (dominula means little mistress or lady ruler). Common in Europe, it hopped across The Pond in 1978, immigrating to the Boston area (or alternatively, to the New Jersey Pine Barrens in 1968) and spreading out from there. It’s now found across the northern U.S. and into Canada. European Paper Wasps are a shade smaller than Northern Paper Wasps, and because they are patterned strongly in black and yellow, they are often mistaken for Yellowjackets. Their antennae are predominately orange. 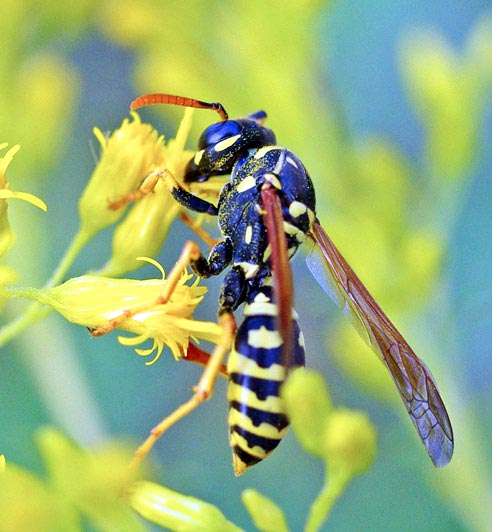 Because it nests a bit earlier than native paper wasps (and may re-hab a nest from the previous year), and its eggs and larvae develop faster than native Polistes, and it uses a wider variety of nest sites, the EPW has been a very successful colonizer. It’s considered “invasive” and has replaced native species in some areas, with as-yet-undetermined consequences.

The general story of the EPW’s life cycle is similar to that of the NPW; they go from egg to adult in four to six weeks. EPW target caterpillars and non-caterpillars alike. They are lauded as biological controls of hornworms, tent caterpillars, and cabbage worms, but several articles warned that butterfly numbers go down when EPWs move in.

Yes, they sting, and there’s disagreement about how dangerous they are. Some write-ups say that they won’t bother you unless you are close to their (often well-concealed) nest; others say that they are extremely aggressive. The stinger packs a double whammy—it’s a sharp jab with a pointed object accompanied by the injection of venom from poison sacs in her abdomen, and she can sting over and over. Venom was originally designed to help wasps subdue prey, but it is equally effective at discouraging predators and other large, lumbering intruders. Studies show that the brighter the coloration of a female EPW, the larger her poison glands are and therefore the more toxic she is (aposematic coloration, folks). 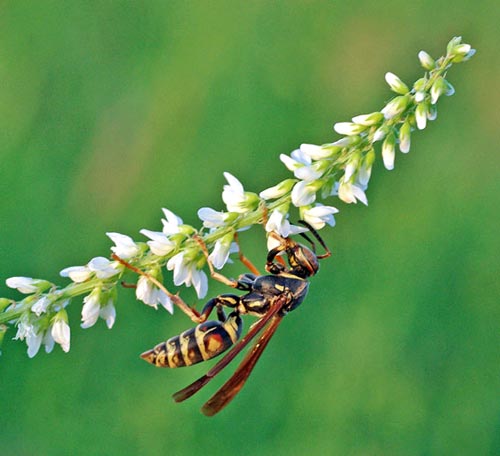 Wasp venom is an amazing liquid, a cocktail of chemicals including enzymes to break down cell membranes; substances to stop the flow of blood and keep the venom localized; neurotransmitters to insure that the pain messages keep on coming, and other chemicals that induce swelling and itching. It’s an all-purpose liquid; beyond its toxicity, a female’s venom contains sex pheromones that attract males and alarm pheromones that rouse other members of the nest, making them “touchier” and marking the target for its sisters to find.