Home » Past Events » Dr. Flores, The Promise of Race and the Whiteness of Nation

Please join us on Friday, February 23rd at 3:00 pm for the 2017-2018 Rhetorical Leadership Lecture in Enderis 103. Dr. Lisa Flores, one of the leading scholars of rhetoric, race, and immigration, will be speaking about, “The Promise of Race and the Whiteness of Nation.” The lecture will be followed by a reception hosted by the UWM Rhetoric Society of America Student Group and the Department of Communication. 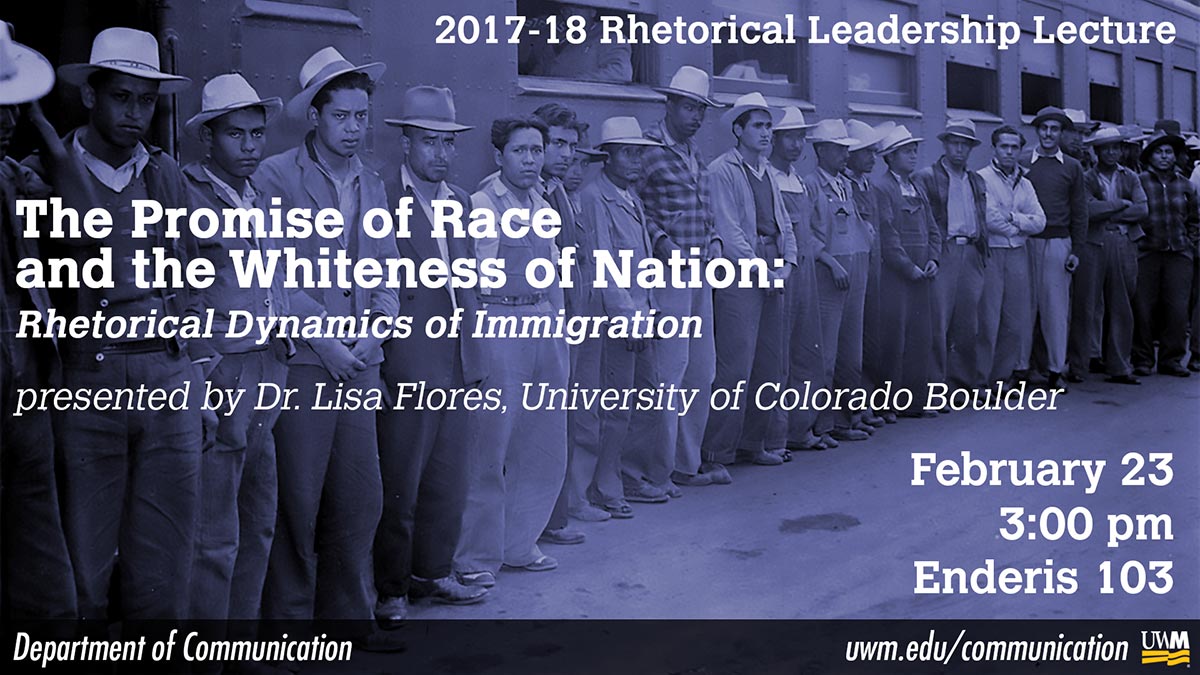 Abstract:
In the mid 1940s the United States and Mexico embarked on an unprecedented project, an international accord that would bring Mexican workers to the United States as contract laborers. That program, commonly referred to as the “Bracero Program” would last for 22 years, involve over 1,000,000 Mexicans, and undergo numerous transitions and revisions. Throughout its duration, the Bracero Program sparked considerable debate, both domestic and international, and drew critical comment from a range of populations, including labor unions, domestic, agricultural and migrant workers, Mexican American communities, the Catholic Church, and politicians.

In this presentation, I explore the rhetorical dynamics of the Wartime Bracero Program, one segment of the larger Bracero Program. Drawing on rhetorical analysis of public discourse, including popular periodical accounts as well as governmental and special interest publications and records, I trace the figuration of Mexican braceros as welcome allies who eagerly came to the U.S. and willingly endured the arduous work of agriculture. In so doing, Mexican braceros emerge as saviors within the crisis of war. I attend, as well, to the framing of the bracero program as an ideal program premised on absolute control. I argue that the intersection of welcome and control sustains what Sara Ahmed might name a happy promise of race. That is, Mexican braceros are racialized as a variant of happy slave narratives and in that contented happiness, they ensure the centrality of race to the nation and absolve whiteness of its racial guilt.