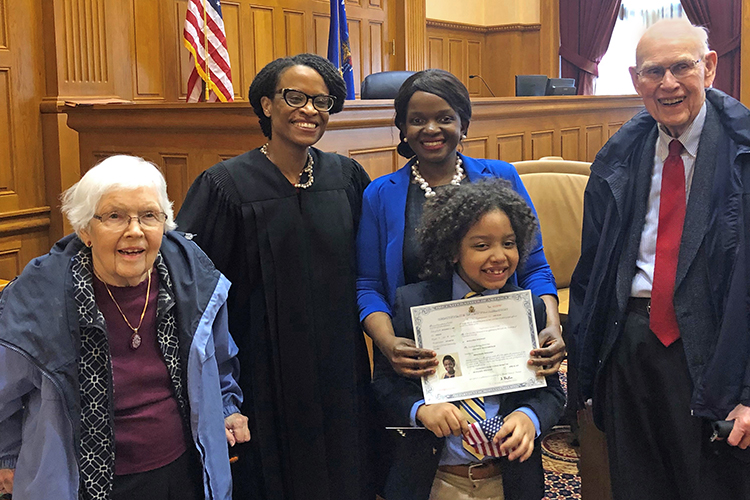 Josephine Hayes-Birchler is about to graduate from UW-Milwaukee with her bachelor’s degree. In the fall, she’ll attend Marquette dental school. And in April, she officially became an American citizen.

It’s all a little unbelievable.

Five years ago, Hayes-Birchler had just immigrated to the United States from Uganda with her son, Preston, and now-ex-husband, who is an American citizen. They lived in Madison, Wisconsin, where she worked as a certified nursing assistant. In 2015, difficulties in the marriage forced her to file for divorce, but before she could find a place to go, her ex-husband kicked her out of their home. Hayes-Birchler bounced among living in her car, a homeless shelter and on friends’ couches.

Five years ago, she had a wild idea.

As a newly single mother with little income, Hayes-Birchler saw education as the way out of poverty for her and her son. She talked with College of Letters & Science student advisor Jennifer Hack, who helped her apply to the university and chart out her classes on the pre-dental track with a cell and molecular biology major.

“I remember the day I moved, I got all of the stuff off of the truck. My son was napping. Nothing was unpacked. I sat in the middle of the room and I broke down and cried,” Hayes-Birchler recalled. “I was like, this is crazy. I didn’t have a job in Milwaukee. I didn’t have child support from my ex-husband. I didn’t have help with babysitting. I didn’t have anything; I didn’t know anyone.”

But she did have motivation. Hayes-Birchler smiles each time she talks about her son, whom she says is her greatest accomplishment in life. Preston is 6 years old now, and will start first grade in September. He’s a curious boy who loves to explore, go to the park and ride his bike. But back then, Preston was her reason for getting out of bed each morning to go to class.

“There are times when I feel like giving up or I feel so overwhelmed,” Hayes-Birchler said. “There are times I don’t feel like studying, but I say no, I need to do this. I want him to have a good life – not just a good life, but a life where we don’t have to struggle.”

To put herself through school, she worked at a nursing home and later with an in-home care agency. Each semester, she took a full load of classes so that she would be able to graduate in four years. Along the way, she forged a support system: Her dear friends from Madison, Jim and Edith Davison; her advisor, Jennifer Hack; her professors, who were understanding when she sometimes had to bring Preston to class with her; the crew at UWM’s Life Impact program, which assists disadvantaged parents in attaining an education; and her friends in Milwaukee.

Her four years of college were full of early mornings, long hours at her job, school and studying. But when she got the phone call telling her that she had been accepted to Marquette University’s School of Dentistry, it made all of that work worth it.

“I started crying like a little child. I was so excited! I could not believe it,” she said.

On top of it all, in April, Hayes-Birchler took her oath of citizenship to become a citizen of the United States. In the audience cheering her on were Hayes-Birchler’s coaches from UWM’s Life Impact Program, friends from Madison, and her son.

Though she is about to graduate, Hayes-Birchler still has a long road ahead. Dental school will be challenging, and she won’t be able to work while she’s in school. Without a job, she’ll lose her state assistance for child care and will have to take out loans instead.

When she walks across the stage in May, she’ll be taking one step closer to that dream.