The largest moving observatory in the world will become a flying classroom for 24 teachers during research flights in the next month. Onboard will be a pair of educators from Milwaukee, including the director of the Manfred Olson Planetarium at the University of Wisconsin-Milwaukee (UWM).

Twelve teams of two have been selected by the National Aeronautics and Space Administration (NASA) to fly on the Stratospheric Observatory for Infrared Astronomy, or SOFIA, a modified Boeing 747 jetliner fitted with a 100-inch effective diameter telescope.

UWM’s Jean Creighton and colleague Kathy Gustavson, a science teacher at Nicolet High School, will be among them in a program called the Airborne Astronomy Ambassadors. Paired with a professional astronomer, they will observe first-hand how airborne infrared astronomy is conducted.

After their flight experiences, the educators will take what they learn back to their classrooms and into their communities to promote science literacy.

Creighton says she didn’t think she and Gustavson, who applied as a team, would be chosen because of the large number of applicants. The two knew each other from Gustavson’s participation in the federally funded Research Experience for Teachers (RET) program in UWM’s physics department. That program, held in the summer, gives high school teachers the opportunity to conduct research with a university instructor or faculty member.

Educators are selected for this professional development opportunity based on a proposal they submit describing how they would communicate their Airborne Astronomy experience to students or the general public. The proposals were then put through a rigorous peer-reviewed process.

When she was notified, Creighton says she was really excited. “Now, I want to be able to bring that excitement to the planetarium audiences when I return,” she adds.

Although SOFIA has been used for scientific research since 2009, the Airborne Astronomy Ambassadors program began last year. Only 31 educators have experienced the flight before now. 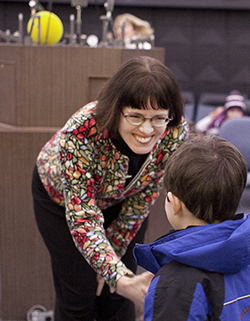 Infrared light is just beyond the visible spectrum and can reveal objects in the universe that cannot be seen in visible light using optical telescopes. Infrared’s longer wavelength means it can pass through gas and dust in space without scattering or absorption.

During their flights, the teams will fly about 10,000 feet higher than passengers would on a typical commercial flight – up to 45,000 feet into the stratosphere. The elevation is necessary, says Creighton, to position the telescope above the Earth’s layer of water vapor, which absorbs infrared light.

SOFIA is a joint project of NASA and the German Aerospace Center (DLR). The aircraft is based at the Dryden Aircraft Operations Facility in Palmdale, Calif. NASA’s Armstrong Flight Research Center in Edwards, Calif., manages the program. NASA’s Ames Research Center manages the SOFIA science and mission operations in cooperation with the Universities Space Research Association (USRA) in Columbia, Md., and the German SOFIA Institute (DSI) at the University of Stuttgart. http://www.sofia.usra.edu/Sofia/sofia.html