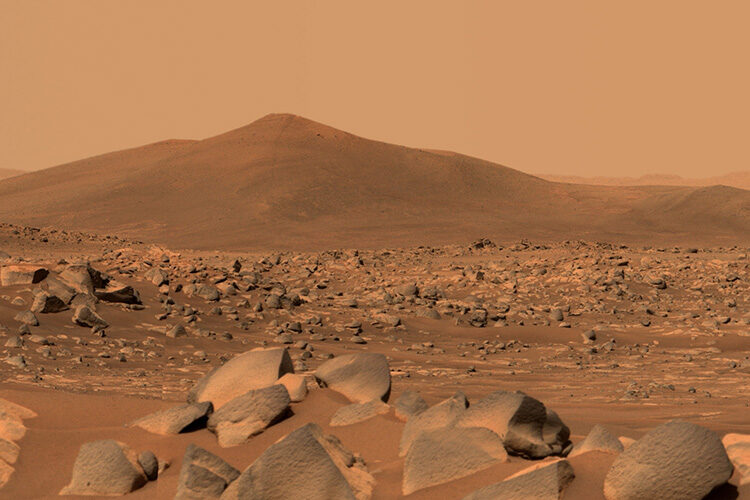 The Mastcam-Z imager on the Perseverance rover captured this image of a hill on Mars named Santa Cruz in May. (Photo courtesy of NASA)

Mars, which is the most accessible planet beyond Earth, is the next frontier in space exploration. Learning about Mars can help us understand more about our own planet and how changes in climate and atmosphere may affect Earth.

It can also help us prepare for the challenges that humans may face whenever we reach the Red Planet. Right now, the two Mars rovers – Perseverance and Curiosity – are exploring the planet’s surface to help scientists learn more about its history, soil and atmosphere.

Reaching Mars isn’t easy. NASA lists 48 missions to Mars since 1960 by space agencies worldwide, with more than half of the missions ending in failure.

On the debut episode of Curious Campus, UWM’s new podcast about science, discovery and culture, we look at Mars exploration with guests Jean Creighton, director of UWM’s Manfred Olson Planetarium, and Darian Dixon, a UWM alumnus who is a lead Mastcam-Z operator on the Mars rover Perseverance.

Below, Creighton and Dixon answer some questions about Mars exploration, their research and their work. Listen to the full show at or on your favorite podcast app.

What makes Mars so fascinating?

Jean Creighton: Mars captures our imagination because it is the next big frontier in terms of human space exploration.  In the 1960s, the United States had the Mariner series, which sent spacecrafts to orbit Mars. In the 1970s, the Viking series began to send imaging technology to photograph the surface and landed on Mars in 1976.

I feel an affinity to Mars because I studied infrared satellites for NASA while doing post-doc work at Caltech, and visited some of the “sand playgrounds” for Pathfinder, the first successful Mars rover.

Darian Dixon: Right now, going to Mars will be a major, though challenging, next step. We’re exploring the final frontier. It’s something that fills our hearts with awe and wonder. I don’t think you can put a price on that. You just get to look up and be happy that you are part of something that is much bigger than humanity.

How soon will humans be able to travel to Mars?

Darian Dixon: There are major financial, logistical and scientific problems that remain to be solved. Some people see Mars as part of a simple, logical progression after going to the moon. It’s not that easy. If going to the moon was a one-foot-high step, the second step – getting to Mars – is a 40-foot-high step.

What are the benefits of space exploration overall?

Jean Creighton: Much of technology common in daily life today originates from the drive to put a human being on the moon. Some examples include current technologies behind weather forecasting, GPS and smartphones.

The need to miniaturize computers for space exploration in the 1960s motivated the entire industry to design smaller, faster and more energy-efficient computers, which has impacted nearly all facets of life. Getting to space has allowed people to turn their research efforts toward Earth.