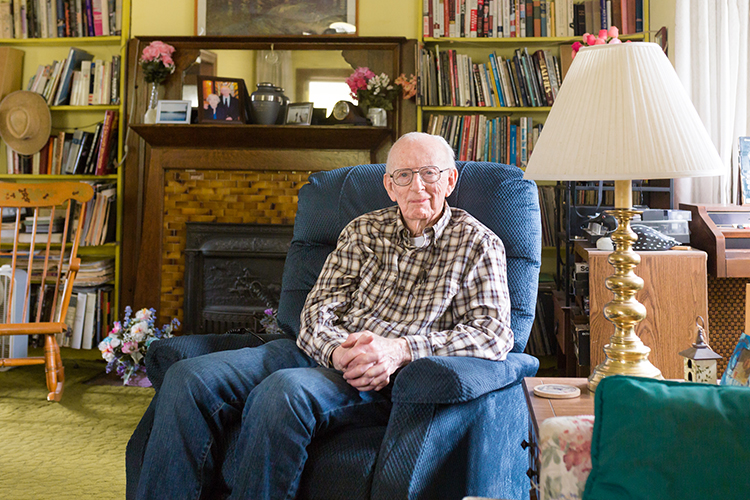 Kenneth Germanson will receive an honorary doctor of humane letters as UWM’s graduation ceremony May 20. “I felt kind of ridiculous at first. Those opportunities usually go to people who are celebrities, or have a lot of money to build buildings,” Germanson said. “I’m neither.” (UWM Photo/Elora Hennessey)

Kenneth Germanson, who will be receiving an honorary doctor of humane letters at the University of Wisconsin-Milwaukee commencement May 20, says he is somewhat overwhelmed and a little amazed at the honor.

“I felt kind of ridiculous at first. Those opportunities usually go to people who are celebrities, or have a lot of money to build buildings,” Germanson said. “I’m neither.”

On the other hand, says the longtime labor leader, journalist and community activist, he accepts the award on behalf of many. “I am pleased that the university has chosen to honor people who are part of the labor movement and social justice.”

And, he said, he’s in good company as an honorary doctor with a well-known conservation leader and fellow journalist, Dan Egan, author of “The Death and Life of the Great Lakes.”

Both will receive their honorary degrees at the “black” ceremony, which begins at 9 a.m.

Pushing for a four-year public university in Milwaukee

It is a pleasure, Germanson said, to receive this honor from a university whose birth he championed many years ago. Germanson was one of a group of students who advocated for the formation of a four-year public university in Milwaukee in the late 1940s.

Germanson started his education at the old University of Wisconsin Extension Division, which offered a two-year program at several sites in Milwaukee. He earned his bachelor’s degree in journalism and economics from UW-Madison in 1951, and joined with other students and graduates in leading a “Mission to Madison” campaign to establish UWM, which was eventually created in 1956. “We just made some noise,” he says in typical understated fashion.

Having a four-year campus in his hometown was personal to him, says Germanson. “There was no way I could have afforded to go to Madison or Marquette for four years when I graduated from high school,” he said.

A long career begins with newspapers

After newspaper jobs in the Milwaukee area, Iowa and South Dakota and service in the Navy, Germanson took a reporter’s job at the Milwaukee Sentinel, becoming active in the union, Milwaukee Newspaper Guild Local 51. He went on to become a staff representative of the State, County and Municipal Employees Union District Council 48, representing public workers. In 1968, he joined the Allied Industrial Workers Union, now part of the Steelworkers Union. He eventually became assistant to the international president before retiring from labor work in 1992 to start another 25-year-long career in social services.

As a member of the staff of Community Advocates, Milwaukee’s largest agency serving low-income families, he was part of efforts to prevent child abuse and neglect, provide health care to low-income families and reduce gun violence. His co-workers were mostly younger, mostly female and mostly African-American, so it was a great learning experience for him, he says. “I loved that work.”

He retired from that job in 2016 at age 86, but he remains active in social justice, progressive and racial justice issues. He also served as president of the Wisconsin Labor History Society, and led a campaign to get Wisconsin to include the teaching of labor history in public schools. He remains president emeritus of the organization.

His interest in social justice and labor issues grew out of his upbringing in the Depression and World War II, he said, as he watched neighbors and families struggle because of the shortages, job losses and family members sent overseas to fight.

“My high school buddies and I used to hang out on the corner late at night and talk about politics.” Those interests sparked his decision to pursue the dual degrees in journalism and economics.

“I saw economics as the way to social justice. I was really curious about how to reach a greater equality of incomes in our society.”

An 18-month stint as a writer for a Catholic magazine also cemented his interest in social justice issues. “That was a time when the church seemed to care about poor people and ordinary people,” he says bluntly, “though they are getting back to that more now with Pope Francis.”

He and his wife, Ann, were married more than 50 years. “She was smarter than me,” he recalls proudly, adding she graduated with a Phi Beta Kappa from the University of Minnesota. They met as young reporters on a newspaper in Iowa. He and Ann, who died last year, raised five children on Milwaukee’s south side.

Throughout his careers in journalism and community work, Germanson was involved in many community activities, serving as president of the board of the former Planning Council for Health and Social Services, a founder and leader of Community 19, a neighborhood group formed in the troubled 1960s to improve racial relations in his far south side area, and also as a member of other boards and committees. His many awards include the Frank P. Zeidler Community Service Award (2014) of the City of Milwaukee; the Witness to History Award (2010) by the Milwaukee County Historical Society; the Eugene V. Debs Award of the Midwest Labor Press Association (1982), as well as numerous awards for his advocacy on health care issues of low-income families.

He doesn’t like to sound too profound or sanctimonious, he said with a smile, but here’s how he sums up his life and work: “The quest to do good in the world is really my motivating factor.”