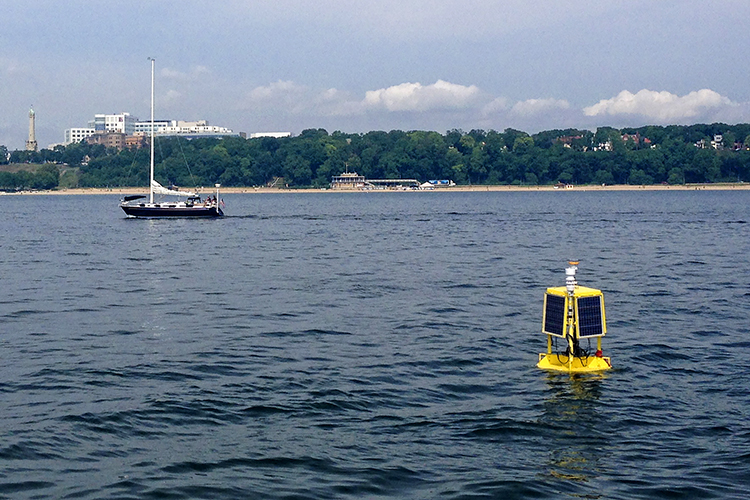 Faculty members Todd Miller and Matthew Smith, along with post-doctoral fellow Lucas Beversdorf, constructed the buoy at the School of Freshwater Sciences to gather minute-by-minute information about conditions around Bradford Beach and transmit it to an online database.

“We know from previous research that algae, sunlight, wind, waves and turbidity are important variables influencing the amount of potentially harmful bacteria in waters,” said Miller, who teaches at the Zilber School of Public Health. “The buoy gives us eyes on the beach.”

The researchers will eventually be able to plug the data into a formula to predict when conditions are likely to produce high levels of illness-causing bacteria. That will enable health officials to more quickly close beaches and issue warnings in response to Lake Michigan’s constantly changing conditions.

Right now, there’s often a lag in the time it takes city officials to detect the presence of harmful microbes in the water, leading to beach closings the day after a threat develops.

The Great Lakes Forecasting System, which is used in current monitoring, reports on conditions on a lake-wide scale. The buoy, however, delivers information about the area around individual beaches.

The buoy launched July 8 is the first of three funded by the city. McKinley and South Shore beaches also are slated to get buoys, which Miller hopes will be operating by the spring.

It will be another year before the Bradford Beach formula for predicting high bacteria levels will be ready to use. But the scientists are confident the buoys will reduce response time and the cost and labor of manual water sampling in the future.

Water conditions sometimes influence how quickly harmful bacteria disperses from water surrounding a particular beach. So wind speed, direction and waves would matter in such a formula, said Paul Biedrzycki, director of disease control and environmental heath for the City Health Department.

And, bacteria are not the only health threat the buoy can help identify, Biedrzycki said. For example, water temperature data can help health officials assess the risk of hypothermia.

“This project may even help us expand beyond microbes into monitoring chemicals using technology,” Biedrzycki said. “I spoke about it to congressional staffers on environmental health. That’s how proud I am of this.”

The idea started with Biedrzycki, who teaches at the Zilber School part-time. He worked with Miller and Alderman Michael Murphy to get funding for the buoy.

Along with improving public health and safety, the project allows UWM master’s students to gain experience working with government, Miller said. The students have been leading the data collection and tackling related policy issues.

Eventually, Miller would like to create a cell phone app for use by the public.

“The aim would be that the community will use the data for more than just the beach warnings, like for wind conditions or water temperature,” he said.