UWM hosted debates this week among Democratic and Republican candidates vying to be each party’s pick for lieutenant governor.

The debates, held July 20 and 21 at the Mainstage Theatre, featured two Democratic and eight Republican candidates ahead of the Aug. 9 primary election. The general election is Nov. 8. 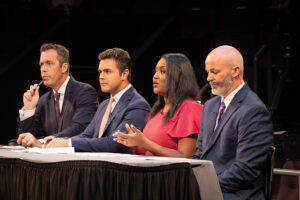 “Open dialogue and debate are the tenets of critical thinking and informed decision-making. UWM is delighted to be a partner in hosting this statewide public policy forum,” UWM Chancellor Mark Mone said.