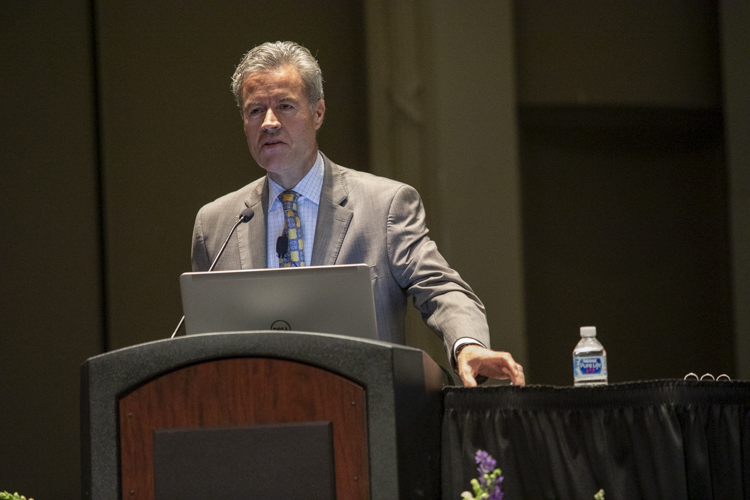 “We’re at a crossroads. The decisions that we make today will set our course for 2025, 2030, and beyond,” Chancellor Mark Mone said Thursday during his annual plenary address. (UWM Photo/Troye Fox)

The University of Wisconsin-Milwaukee enters a crossroads at the start of the new academic year, buoyed by positive momentum spurred by successful educational, research and fundraising efforts amid a changing environment in higher education, Chancellor Mark Mone said Thursday.

Shifting demographics, student debt and racial disparities in achievement rates are among key challenges that colleges and universities nationwide face to address projected enrollment declines. At his annual plenary address, Mone outlined myriad steps that UWM has or will be taking to recruit, retain and graduate students.

They include the new Welcome Center, expanded scholarships and simplified paths to graduation that can help reduce costs. He said that everyone on campus plays a role in helping students get the best experience possible at UWM.

“We’re at a crossroads. The decisions that we make today will set our course for 2025, 2030, and beyond,” Mone said at the Helene Zelazo Center for the Performing Arts. He sought to underscore the momentum and positives at UWM in the face of what he described as “headwinds” in higher education.

Mone cited encouraging developments at UWM on a number of fronts. Most recently, they include:

UWM remains one of the top research universities in the country despite comparatively limited resources, an achievement that Mone said highlights the quality of the faculty and the opportunities for students.

Yet the university must be even more nimble in order to sustain its dual mission of access and research and demonstrate its value to stakeholders, Mone said.

While numbers aren’t yet final, enrollment this year is expected to decline by 3.8%, which would equate to an enrollment-related budget reduction of about $7 million.

Some of that is due to the declining population in the Midwest. International enrollment is down around the country in part due to sociopolitical issues. The number of transfer students has also declined, which is also largely a function of demographics.

The chancellor devoted much of his nearly hourlong presentation to the strategies underway to tackle the challenges. Of greatest importance in the current climate was to create “outstanding learning environments” that help recruit, retain and graduate students.

Mone highlighted the promising start of the M3 (pronounced M-Cubed) initiative, which is a partnership among UWM, Milwaukee Area Technical College and Milwaukee Public Schools aimed at improving achievement rates and closing equity gaps in the city.

Faculty and staff have played important roles in creating and shepherding innovative ways to help retain students, Mone said. He pointed to UWM having the largest enrollment in online courses of any institution in Wisconsin; the increased retention rate in the Honors College thanks to holistic admissions, intensive advising and curricular reform; and UWM’s Flexible Option competency-based degree programs.

“It’s with our plans, it’s with our actions that we have underway and especially with you – our leadership, our faculty, staff, the community, the importance of our students,” Mone said. “You give us that competitive advantage to continue to succeed now and well into the future.”