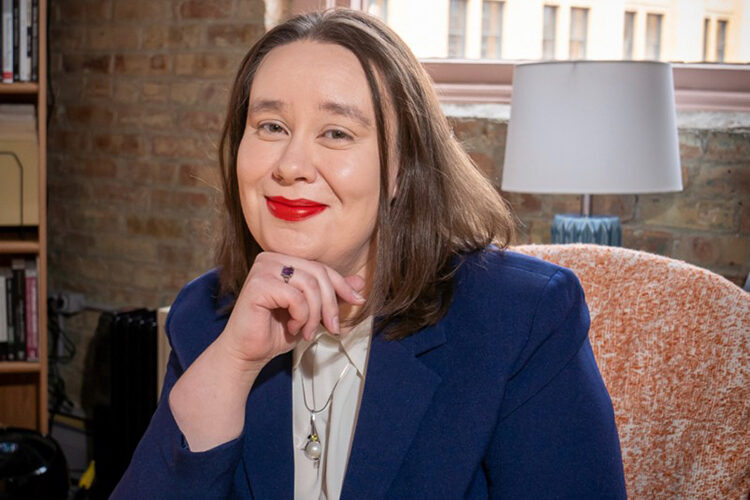 Melinda Brennan says that a class she took at UWM set her on a path that would lead her across the country but then back to Wisconsin. (Photo courtesy of Melinda Brennan)

When she was appointed as executive director last January, Dr. Melinda Brennan became the first woman of color to lead the Wisconsin affiliate of the American Civil Liberties Union.

“It doesn’t feel like a breaking ceiling,” she said. “There’s freedom and being lost when you’re the first. … In some ways, you’re free because you get to make it up. You have to have a good team around you to bounce ideas off of so that you know that you’re making better choices. And in another way, it’s a great abyss because your experience in the role will not match up with history. You have to build your own compass.”

Brennan’s compass has been pointing in new and exciting directions since she started the job.

“There’s a lot of work to do,” she said. “The day-to-day is endlessly learning new things and refusing to be intimidated by them.”

The role of the ACLU

The American Civil Liberties Union is a nonpartisan organization that seeks to safeguard civil liberties and civil rights for all. People may be most familiar with the group’s legal arm, which was long brought court cases that have defined the scope of Americans’ constitutional rights. But the ACLU does essential work outside of the courtroom, too.

“If you’re doing it right, at any given ACLU across the United States, you’ll find a depth of community engagement. Another piece is advocacy. The third piece is legal intervention,” Brennan said.

For Brennan, those tenets mean meeting with constituencies across Wisconsin to determine the problems, lobbying legislators to drop bad bills or shape them to have more just outcomes, and using legal action to secure the best outcome for the individuals or groups they represent.

In particular, the Wisconsin affiliate of the ACLU is focused on reproductive rights, LGBTQ+ rights, racial justice, carceral reform, immigration and environmental justice.

Many of these issues seem to fall to one side of the political spectrum or the other, but the ACLU is a nonpartisan organization. Brennan wants to ensure her team protects the civil liberties and civil rights of all Wisconsinites, no matter their voting record. And, she added, many of the issues the ACLU of Wisconsin strives to address are nonpartisan, despite how many have tried to color the issues.

“(For example), there are lots of people who feel very strongly that books should not be banned in schools. To say otherwise is to try and stop people from being able to make up their own minds about what they believe in and how they want to live their lives,” Brennan explained. “Quality education with the freedom to be able to read and think for yourself is actually not a partisan issue.”

Brennan’s first year as executive director has been a busy one. She’s made several changes to the organization, starting with building a bigger team. Among them is another UWM student and alum: Brennan highlighted the work of her community engagement director Justice Grau, who is working toward her master’s in community engagement and education.

“There’s a lot of work to do. It needs many hands, so people are less fatigued by it,” Brennan said. “That (also) means putting community engagement at the center of our work. Community engagement should be the beating heart of the organization.”

Working with the community

Brennan wants to work with community members and partner nonprofits to understand local communities’ needs. Community engagement also means informing people about their choices in upcoming elections and giving them information about their voting options, or bolstering other organizations that can provide direct support to individuals in need. Brennan has also been excited to see the return of the Legal Observer training program and Know-Your-Rights trainings, which the ACLU of Wisconsin had to pause during the COVID-19 pandemic.

She’s also challenging how her staff approaches their work by asking them to approach civil liberties and civil rights intersectionally, rather than separably.

“My intervention at the ACLU of Wisconsin has been to resist what is called ‘bucketing.’ That’s thinking of an issue as a singular, separable thing,” she said. “If you’re going to talk about reproductive justice, you should be talking about what that looks like if you’re incarcerated as well. You can’t take about racial justice without talking about economic justice. … And if you do, you unfortunately leave out critical pieces you should address.”

That aligns with her emphasis on a culture of diversity, equity, inclusion, and belonging. Even the ACLU of Wisconsin has work to do, she said, in making sure they “walk the walk” even as they “talk the talk.”

Brennan grew up in Port Washington, a second-generation Mexican-American and a queer woman with multiple disabilities who majored in women’s and gender studies at UWM.

“I remember when I took my first WGS course, and my teacher was Dr. Cheryl Kader, who has since retired. I was in that class, and I thought, I want to do what she’s doing,” Brennan recalled.

Kader facilitated thoughtful discussions between her students, who came from very different backgrounds with equally different political beliefs. Brennan credits that class with setting her on her path – first toward a master’s in sociology from UWM, then a PhD in gender studies from Indiana University, and then as a faculty member at SUNY Oneonta, where she spent four years building the Women’s Studies Department.

Eventually, Brennan and her partner moved back to Milwaukee to be closer to family. Brennan briefly returned to UWM as a program administrator for the Women’s and Gender Studies program before mentors and friends urged her to apply to the ACLU of Wisconsin. The executive directorship had just opened up.

Now, she works every day to implement the lessons she learned at UWM to help the ACLU of Wisconsin further its work.

“You should be able to learn from anything or anyone, whether you learn what they intend or not … and you’ll be better for it,” she said. “Critical thinking is crucial for having a well-lived life, and that means considering the beliefs you were raised with.”

In the meantime, she and her team are gearing up for the Wisconsin State Supreme Court race in April and continuing their work in community engagement.

Brennan smiles and sighs as she contemplates the months ahead. “So, we’d better get to work then.”