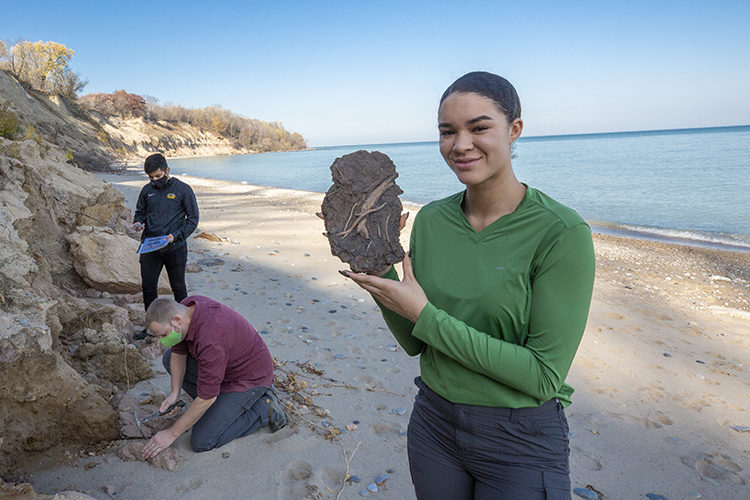 UWM student Mikayla Walker show a fragment of peat with well-preserved plant and insect material unearthed at Sheridan Park in Cudahy. The fossil was found at the bottom of a bluff containing sedimentary strata deposited under a nearly mile-thick glacial at the end of the last ice age. Behind Walker are student Rene Chavez and geosciences lecturer Scott Schaefer. (UWM Photo/Troye Fox)

Between 35,000 and 40,000 years ago, Lake Michigan’s geography looked drastically different. Much of its present-day shoreline was made up of marshes and bogs. Student researchers are studying fossils deposited during that time to learn more about the area’s ecosystems.

“It’s like stepping back in time,” Mikayla Walker, a junior majoring in geology, said of her work in a Cudahy park on Lake Michigan. She is one of the student researchers studying fossils deposited along the lakeshore there.

She became interested in geology through GO FoRWARD, a program that encourages more students from underrepresented groups to go into the geosciences. Her mentor is Scott Schaefer, a lecturer in geosciences. Dyanna Czeck is principal investigator for the GO FoRWARD program, which is funded by the National Science Foundation.

The work Walker is doing is looking at sediments from a geological layer that runs under and expands beyond Cudahy, which includes strata of ancient bog material – peat. The material contains flora and fauna that predate the last glacial advance. “The bog preserves things very well, which is what is really neat about it,” she said.

Fragments of beetle fossils are among the clues to the paleoecology of the area that were left behind, and that’s where Walker has focused her research. Since the pandemic hit, much of her work is being done in the lab, tearing apart the compressed peat material to recover the fossils, and studying them under a microscope rather than out in the field.

Beetles are the largest animal remains found in the samples. Figuring out which family the fragments fall into and classifying the ancient beetles is a challenge, she said.

“When you’re doing research, you think you’re going to learn so much – and I did – but you also find more questions that need researching. The more you learn the more you question.”

The project she is working on would complement similar work being done by a professor on the other side of Lake Michigan, she said, and she is thrilled at the idea that what she is doing is related  to the body of research on what life was like before the Great Lakes region resembled what we know today.

Walker, who transferred from MATC, is happy that she’s been able to do research at an R1 university – “I didn’t even know what an R1 university was when I came here.” (R1 is a ranking that indicates the university is engaging in the highest level of research activity.) Now, she said, “I’m still really proud of what I’ve done. It seemed scary in the beginning, but I feel like a scientist after working on it.”

She’s a junior and has been offered the opportunity to travel to Spain with Czeck to study tectonic plates – whenever travel restrictions are lifted.

Walker said she feels it is important to encourage more young women and people of color to go into geology and geosciences, fields that are currently mainly white and male.

“My goal is to inspire women and children to go against the status quo and pursue degrees in STEM.”