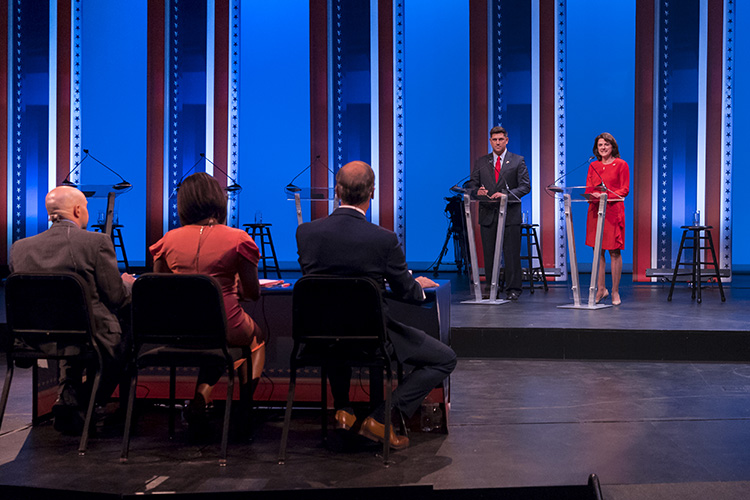 Kevin Nicholson and Leah Vukmir greet the crowd at the start of the debate. (UWM Photo/Elora Hennessey)

When asked what they would “push back on that the president has said or done, and what is his best accomplishment so far,” Kevin Nicholson and Leah Vukmir, the two Republican frontrunners in the race for U.S. senator from Wisconsin, pushed back against the question.

“I look at the president’s agenda and I say it’s a darn good one,” said Nicholson, a Marine veteran and self-styled political outsider from Delafield. “I get you asked your question in the negative context, but this is a good agenda.”

Vukmir, an incumbent state senator from Brookfield, agreed and said: “The liberal elite and the media want nothing more than to bring this president down. I want to see President Donald Trump succeed. When he succeeds, America succeeds.”

The candidates also debated issues including education, health care, immigration reform and reproductive rights during the campaign’s first televised debate on Thursday, held in the Mainstage Theatre at UW-Milwaukee. The debate was moderated by WTMJ news anchors Charles Benson and Shannon Sims, along with WUWM’s Mitch Teich.

The debate comes two weeks after the Mainstage Theatre was the site of the first televised debate in the Democratic campaign for governor.

The candidates clashed over their backgrounds. Nicholson repeatedly criticized the “political class” and drew parallels between his own lack of political experience and the president, saying that Trump “needs an outsider reinforcing him in the U.S. Senate.”

Vukmir talked about her experience working with Gov. Scott Walker to pass legislation in the Wisconsin Senate. When asked if she considered herself a political insider or outsider, Vukmir said, “I consider myself an activist Republican.”

On the topic of education, Vukmir lamented the “duplication of services” and wanted to bring “agencies from Washington, D.C., down to the states.”

On the issue of health care, both candidates spoke against the Affordable Care Act and in favor of consumer choice.

On the topic of immigration reform, Vukmir said, “We cannot have a conversation about DACA or any of the other parts of the immigration plan until we build the wall. Then we can talk about a process for those DACA residents.”

Nicholson agreed that the first step to immigration reform should be building a wall along the U.S.-Mexico border. He also spoke in opposition to allowing those in the Deferred Action for Child Arrivals program to serve in the military as a path to citizenship.

When asked about reproductive rights, Nicholson said, “I can approve judges…and my expectation for those judges…is that they understand that the Constitution is a pro-life document.”

Vukmir also said that the Constitution is a “document that upholds life.” She denied that she would approve a Supreme Court justice on the basis of overturning Roe v. Wade, saying “we can’t put cases before them, but yes, I do support life.”

After the televised first hour, the other three Republican candidates – Charles Barman, Griffin Jones and George Lucia – joined Vukmir and Nicholson for an additional 30 minutes of debate and to answer questions submitted by members of the public.

The three other candidates raised issues of their own, occasionally disagreeing with Vukmir and Nicholson.

Barman was critical of involvement in foreign wars and said that any type of public transit “is always a loser.”

Jones was opposed to raising the retirement age for Social Security and Medicare.

Lucia said that he’s “been a Donald Trump supporter since he came down the escalator and announced his candidacy,” yet he’s “uncomfortable with his rhetoric. I think that he goes overboard sometimes in making statements and tweets.”

All of the candidates except Barman agreed to support the winner of the primary election on Aug. 14.

You can watch the full debate online at WTMJ.

A roundup of media coverage

Media outlets from around the state covered Thursday’s debate, just as they did for the Democratic gubernatorial debate at UWM two weeks earlier.