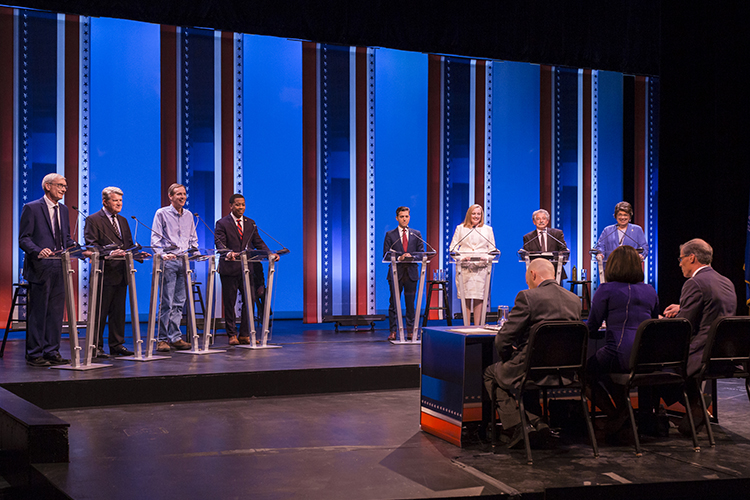 All eight Democratic candidates for governor said they do not support the deal that Gov. Scott Walker negotiated to entice Foxconn to Wisconsin.

The candidates also talked about raising the minimum wage and reducing the prison population during the campaign’s first televised debate last week, held in the Mainstage Theatre at UW-Milwaukee. The debate was moderated by WTMJ news anchors Charles Benson and Shannon Sims, along with WUWM’s Mitch Teich.

State schools superintendent Tony Evers agreed with Josh Pade that it’s too late to stop the deal but said it should be renegotiated to better benefit Wisconsin employees and environment.

Taiwan-based technology giant Foxconn Technology Group agreed to build a huge plant in Wisconsin to manufacture flat-screen displays, lured by a package of state and local incentives that could approach $4 billion.

“We’d like to know what (Walker) was smoking when he made that deal,” said Madison Mayor Paul Soglin. “In China, they are laughing at us.”

The candidates will square off in the primary election Aug. 14. The winner will take on Walker in the Nov. 6 general election.

Vinehout, state senator from Alma, stressed the state’s history of being one of the first in the nation to implement a living wage in 1913. She advocates increasing the current minimum wage of $7.25 to $8 an hour, then raising it every year until it hits $15.

Soglin is supportive of a law in Dane County, which includes Madison, that will raise the minimum wagefor county workers to $15 by 2022. He disagrees with those who say that’s too high.

“We will gain back the losses in four to five years,” Soglin said.

All the candidates agreed that the state’s prison population should be lowered.

“We’re spending an ocean of money. It is bankrupting us morally and financially,” said Roys, former state representative from Madison.

Roys wants to focus more on programs that would better integrate recently released prisoners into society.

Mitchell, president of the Professional Fire Fighters of Wisconsin, said that being an African-American male as well as a parent makes this issue personal.

“When we are talking about criminal justice reform, it doesn’t escape me that I am raising two black kids in the worst state to do so. When you think about that, that’s a problem,” Mitchell said.

McCabe, founder of the nonpartisan group Blue Jean Nation, said the state spends as much on the UW System as on state prisons.

“Wisconsin is literally spending more locking people up than spent on locking in the potential of our population,” McCabe said.

Candidates were also asked to ask questions of each other. Topics were varied from how to appeal to rural voters to Mitchell, referencing his statewideBadger Beer Tour, asking McCabe what his favorite beer is.

The debate can be seen in its entirety at WTMJ’s website.

UWM was the center of Wisconsin’s political world July 12, when the university hosted the first debate televised statewide among Democrats running for governor this year.

The debate was covered by media throughout Wisconsin. Below is a selection of some of those stories.

UWM will also host a debate July 26 among Republicans running for U.S. Senate.

WTMJ: Who won the debate?