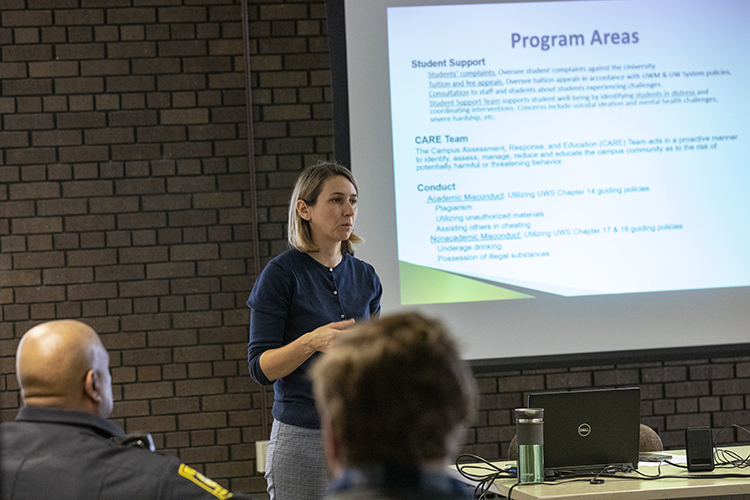 Sleeping in class, sending odd emails and exhibiting poor hygiene may all just seem like signs of an undedicated student. But these behaviors can also be cries for help.

That’s the message that the Dean of Students office and UWM Police Department convey during safety training sessions for faculty and staff, conducted on campus several times a year. Participants learn what red flags to watch out for and how to report their concerns.

“Nothing is too small,” said Abby Meddaugh, associate dean of students. “Students just want to know that they’re cared for.”

Instructors and staff members are sometimes hesitant to talk to the student about these behaviors or to even report them to others, Meddaugh said. They are afraid these actions are too small or insignificant. But left unchecked, these behaviors can fester in the student, causing additional personal issues and, in isolated instances, grow into violence, threatening the safety of others in the classroom and on campus, she said.

“This is precisely why we like these issues to be reported early on. Early intervention is the best way to solve a lot of potential issues, including violence,” said Craig Rafferty, UWM police community liaison officer.

Over 700 faculty and staff members at UWM’s three campuses have already received this training. Each semester, UWM police and Dean of Students office hold the training sessions to equip staff and faculty with knowledge of what to do in the case of a student in crisis, a disruptive student or an active threat.

The training sessions, led by Meddaugh and Rafferty, focus on the saying “See something, say something.”

When a student exhibits any of the abnormal behaviors and has no one to talk with, it can lead to behavior that can make other students feel unsafe, such as slamming doors and making rude comments, Meddaugh said. But if those small, seemingly insignificant behaviors are reported right away, intervention could prevent the student from escalating to violent behavior later.

Reporting these incidents also takes the pressure off the staff and faculty.

“Take it off your shoulders and put it on ours,” Meddaugh and Rafferty tell those at the training sessions.

Rafferty advises attendees to follow the saying “Avoid. Deny. Defend” in the case of an active threat. The first course of action should be to remain calm and avoid the threat. If that’s not possible, Rafferty said, the next step is to deny the threat access to the area, such as by building a barricade to the door or forcing the door shut. Rafferty then shows participants ways to defend themselves against the threat.

Through audience participation, videos and demonstrations, the training invites questions and sparks conversation among attendees and leaders.

UWM police and Dean of Students office has trained employees from UWM at Waukesha and UWM at Washington County campuses in addition to the Milwaukee campus.

“We’ll come to you,” Rafferty said.

Sessions take place through December in the UWM Student Union. Additional training sessions will be offered next semester.