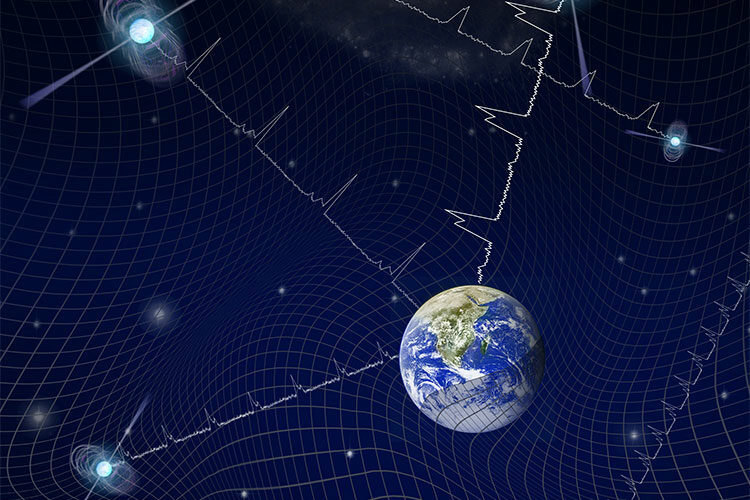 In this illustration, Earth is embedded in space-time (which looks like netting in this depiction), which is deformed by a combination of low-frequency gravitational waves. The radio signals coming from pulsars (stars with “beams” emitting from either side) usually reach Earth at precisely regular intervals.
(Illustration by Tonia Klein/NANOGrav)

The universe is chock-full of massive celestial bodies that slam into each other. Albert Einstein hypothesized that these cosmic collisions send out invisible shocks called gravitational waves through the universe, warping space-time. Think of a bowling ball tossed onto a trampoline.

Below, Vigeland and Siemens answer some questions about their out-of-this-world research. Listen to the full show at WUWM.com or on your favorite podcast app.

Tell us more about these ripples in space-time and about the kind that have already been discovered.

Xavier Siemens: Gravitational waves are produced by very massive objects in space that move very quickly, such as orbiting pairs of black holes. The waves that have been detected recently by an experiment called LIGO are high-frequency gravitational waves that were produced by black holes with masses somewhere around 60 solar masses (60 times the mass of our sun), but some were also detected from neutron star collisions.

Tell us about the low-frequency waves that you are searching for.

Sarah Vigeland: The waves that we are now looking for come from super-massive black hole binaries. These are two black holes that are millions to billions of times the mass of our sun.

LIGO sees gravitational waves with high frequencies – things that are changing on short time scales. But low-frequency waves are being produced on very long timescales – months to decades. So you need a completely different instrument in order to detect those.

Our detectors are millisecond pulsars, which are what’s called stellar remnants. So it’s what’s left over after a massive star runs out of fuel. Pulsars emit radio waves from beams near their magnetic poles and as they rotate. These sweep around like the beams of a lighthouse. This rotation is very stable, so these pulsars basically act like very stable clocks.

That makes them perfect for detecting gravitational waves. If a wave passed by, then there’s going to be a tiny change in the rate at which the pulsar’s “ticks” reach the Earth. Now, we use a whole array of pulsars that are scattered all over the sky.

Why is it so important to find low-frequency gravitational waves?

Xavier Siemens: There are a couple of answers to that question. One of them is that we’ve learned from traditional astronomy that it’s really important to look at many different wavelengths of light. So we look at the universe with optical telescopes, with X-ray telescopes, radio telescopes, and all of those paint a very different picture of what’s going on in the universe. It’s important to do this with gravitational waves as well.

Because there’s a difference in the frequency of the waves, there are also very different sources that are producing them. And this brings me to the second part of the answer: The most promising sources of gravitational waves with these periods of years are supermassive black holes that form when galaxies collide. By searching for and studying these kinds of gravitational waves, we’re going to learn about how galaxies grow, merge and evolve in the universe.