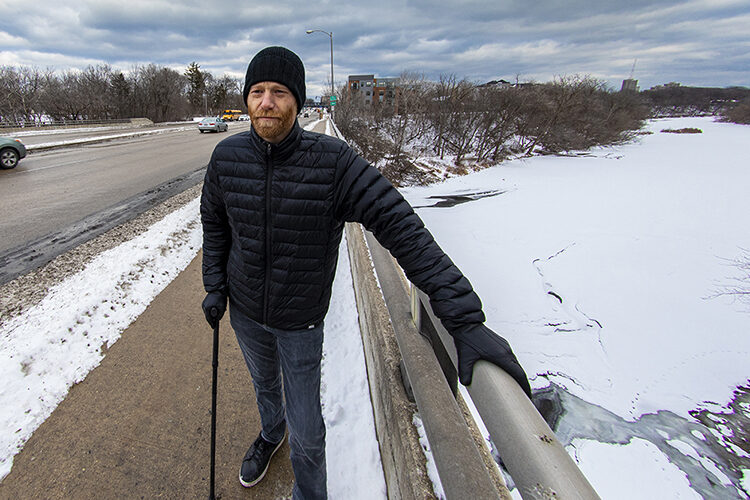 Charles Paradis, assistant professor of geosciences, and his students are investigating why the main ingredient in road salt is turning up in Milwaukee rivers in the summer. (UWM Photo/Troye Fox)

Typically, the Port of Milwaukee stores over a million tons of road salt at any point during the winter, and much of what is used on icy roads washes into waterways as the snow melts. So it wouldn’t be surprising if high concentrations of chloride, the main ingredient of road salt, were found in areas rivers as winter turned to spring.

But the Southeastern Wisconsin Regional Planning Commission (SEWRPC) has found that elevated amounts of chloride in Milwaukee County rivers, including the Root River, occurs in the summer months, when the chloride crystals aren’t in use.

So what is going on? It’s a mystery that Charles Paradis, assistant professor of geosciences, is charged with solving.

SEWRPC wondered if the chloride is infiltrating the groundwater and then, when heavy summer rains hit, the salty groundwater is being mass-discharged into the river. It’s important to find out because the primary drinking water source for roughly half of the U.S. population comes from groundwater.

“The report from SEWRPC actually posed the hypothesis for our project,” Paradis said, “and so far, the data strongly supports that that’s what’s happening. We think road salt is sticking around in the groundwater for some period of time.”

With funding from the UW Water Resources Institute, Paradis and members of his lab are trying to confirm findings by determining how much of the summer water flow in the Root River is from groundwater and how much is from rainfall.

Three times a week last summer, graduate research assistant Leah Dechant stepped into rubber waders and made her way into the Root River at a spot along 7 Mile Road, west of I-94, near a dairy farm. There, she took water samples before, during and after rain events.

She did the same in the river at Quarry Lake Park in Racine, which is more urban. At both locations, a gaging station run by the U.S. Geological Survey continuously monitors river water conditions, including flow, allowing Dechant to pair each water sample collected with real time river water conditions.

Dechant then passes the samples on to Timothy Wahl, a geochemist at the School of Freshwater Sciences, who provides her with a measurement of two vital clues: chloride concentration and stable water isotopes.

“With this information, I can calculate how much chloride is flowing through the river at that site, for that time, on that day,” she said, “And I can find out the age of the water in the samples.”

Knowing the age of the water in the samples will tell them whether it contains precipitation or groundwater, said Paradis. River water that came from rainfall would be younger than the stored groundwater.

Once they know the ages, Dechant will figure out the ratio of the two sources in her samples, using a complex process that has been described as “trying to unscramble an egg,” Paradis said. If higher chloride levels are traced to days during or after rain, and they contain more “old” water, they will have proof of their hunch.

If salty groundwater is leaching into Milwaukee rivers, then how likely is it that the same process is happening other rivers of other cities that have icy winters? Very likely, said Dechant.

“We see this happening in both the urban site and rural sites in Racine County, so I would highly assume it’s also occurring in any other place where road salt is applied.”